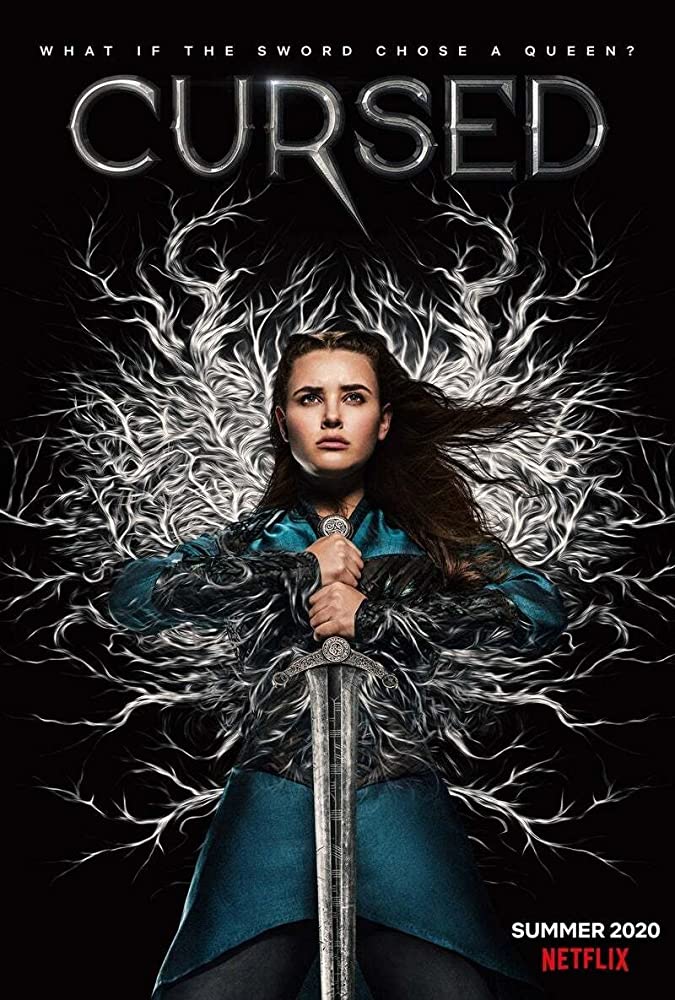 Basically: Arthurian legend told from the Lady of the Lake’s point of view…sorta.

What if Game of Thrones was set in an Arthurian legend? But had less budget than HBO? And more diversity? (Although that last part is not hard.) You’d get Cursed, Netflix’s new take on the legends of Arthur, this time told from the perspective of the Lady of the Lake. Based on the illustrated novel by Frank Miller and Thomas Wheeler, it’s an interesting way to tell this legend that we haven’t seen before…although we wish it was executed better.

In Cursed, Nimue (Katherine Langford) is a young fey (a type of fairy) who’s imbued with magical powers after she’s attacked by a dark god. While there are many different kinds of fey throughout the land, she’s treated like an outcast by almost everyone. Especially while the Red Paladins—a kind of religious puritan cult—ravage the land and threaten to wipe out any form of magic. When her village is burned down, Nimue’s mother entrusts her with a mystical sword (AKA Excalibur) and asks her to take it to Merlin (Gustaf Skarsgård). Merlin, in this rendition, first appears to be a drunk maniac who wields too much power with little results. But he’s got deadly secrets bursting out of his every facet (you’ll soon find out this show is quite literal). On Nimue’s way to find Merlin, she meets Arthur (Devon Terrell), a charming sellsword and musician who totally steals her heart. Langford and Terrell have good chemistry and play their roles well. You’ll want to root for them both as a love story and as the heroes they were born to be. Together they get into all sorts of trouble that seems to land anyone who helps them with a sword in their back or a date with fire. Namely people of color—it gets to a point when you can pretty accurately predict when a person will get brutally murdered because they’re non-white.

Okay, here’s the thing. Having a diverse cast is great (we’re so tired of all-white period pieces, as if people of color didn’t exist yet). However, if it’s merely to inflict pain or to make a traditionally white character POC only to have them steal a white character’s power…(you’ll see)…that is not okay. Putting a feminist spin on the usually male-centric Arthurian legends is a wonderful idea that should be explored more—but not at the expense of BIPOC bodies. In terms of the production, Cursed is very much a made-for-TV type of series with the special effects to match. Think BBC’s Merlin but far more brutal and bloody—ooh, the show doesn’t shy away from the gore—and nowhere near as good. Still, you might find yourself hitting play because you’ll want to see how Nimue’s side of the story plays out. For better or for worse.

In the End: Cursed had a great premise but sadly it doesn’t quite deliver.

Cursed is out now on Netflix.