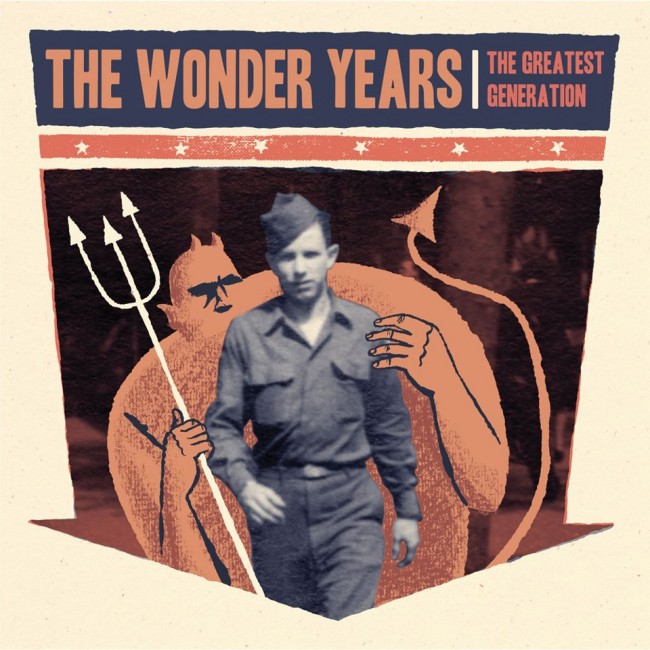 There’s not a lot to say about The Wonder Years that hasn’t been said before. The past six years have seen the band evolve from a scrappy group of Philadelphians making barely-serious pop punk into a genuine tour de force of the modern music scene. But their third full-length The Greatest Generation proves once and for all that The Wonder Years’ significance goes far beyond their infectious sound and tattoo-ready lyrics. The third in a trilogy, the album is made up of thirteen of the strongest and most meaningful songs the band has ever written, cementing them as one of the most important acts of this decade.

The band’s growth is clear from the very first second of the album, with the opening notes of “There, There” revealing a fragility never before heard in frontman Dan “Soupy” Campbell’s voice. Even when the gentle guitar gives way to the full band and he breaks into his trademark almost-yell for the song’s refrain of “I’m sorry I don’t laugh at the right times,” it’s with a newfound sense of passion and urgency. The song sets the tone perfectly for The Greatest Generation, somehow managing to showcase the band at both their most vulnerable and their most powerful in just two and a half minutes.

First single “Passing Through A Screen Door” returns to the blistering pop punk fans have come to know and love from The Upsides and Suburbia, but this time the sound is more polished — without losing any of its edge. Bassist Josh Martin dances between pounding drums and a relentless triple-guitar assault as Campbell delivers one of the best vocal performances of the whole album. His voice breaking as he sings, “Jesus Christ, did I fuck up?” is absolutely heart-wrenching, while the chorus shows a command only hinted at on the band’s earlier work. This track is one of the clearest examples of how hard The Wonder Years have pushed themselves musically on this album — they’ve essentially taken each element that was great about their previous material and brought it to an impressive new level.

“We Could Die Like This” and “Dismantling Summer” continue in the same vein, contrasting upbeat music with dark, confessional lyrics in trademark TWY fashion. Even the minor-key punk rock of “The Bastards, The Vultures, The Wolves” is unmistakably the same Wonder Years who wrote songs like “My Life As A Pigeon” and “Coffee Eyes.” But “The Devil In My Bloodstream” is unlike anything the band has ever done before. The song opens with a lone Campbell singing over a piano line that is simple but not understated, slowly layering with light guitar and female vocals courtesy of Laura Stevenson before bursting into full band at the two minute mark. A tribute to Campbell’s grandfather, the song is strikingly intimate both musically and lyrically, carrying that sense of intimacy through even its heaviest moments.

The pace picks back up with “Teenage Parents,” an uptempo song about growing up poor that sounds like The Upsides’ older brother. Though catchy, the track serves more as a bridge between songs that better show off the best of what the band has to offer on The Greatest Generation. The Wonder Years have always had a dark edge to them, but this album brings that edge out more than ever before. “Chaser,” “An American Religion (FSF),” and “A Raindance In Traffic” all strike a greater harmony between the tone of the lyrics and the tone of the music itself without ever letting the sound get too downbeat, a give-and-take balance that the line “If you study the laugh lines, you’ll see that I’m cracking” seems to analogize well.

The one song on the album that misses the mark somewhat is “Madelyn,” a stripped-down acoustic track that simply doesn’t offer enough musically to hold attention for long. Thankfully, “Cul-de-sac” comes to the rescue with the irresistible pop punk hooks and made-for-singalong melodies the band do so well. But the indisputable high point of the album comes in the epic closing track “I Just Want To Sell Out My Funeral” — arguably their most ambitious song to date, clocking in near the eight minute mark. The band is well-known for self-referential lyrics, which are littered throughout the rest of the album as well, but “Funeral” takes this to an entirely new level: the song culminates with over four minutes of re-purposed refrains from each of the previous twelve tracks, all working together seamlessly rather than feeling forced into place. There is something inexplicably moving and impossible to put into words about the experience of listening to the album as a whole and feeling it build to such a perfect close with this song. While many albums simply end, The Greatest Generation comes to a fully-realized conclusion with its closing lines: “We all want to be great men / There’s nothing romantic about it / I just want to know that I did all I could with what I was given.”

The Upsides and Suburbia were great pop punk albums, but The Greatest Generation is something more than that. It’s an anthem for awkward and nervous kids everywhere whose only escape is through the music that resonates with them. It’s a testament to the fact that The Wonder Years are those kids too. It’s a record about being pushed to the point of almost giving up but fighting to find the strength to make it through. Above all else, the album makes one thing clear: if The Wonder Years are the voice of a generation, then this may just be the greatest generation after all.