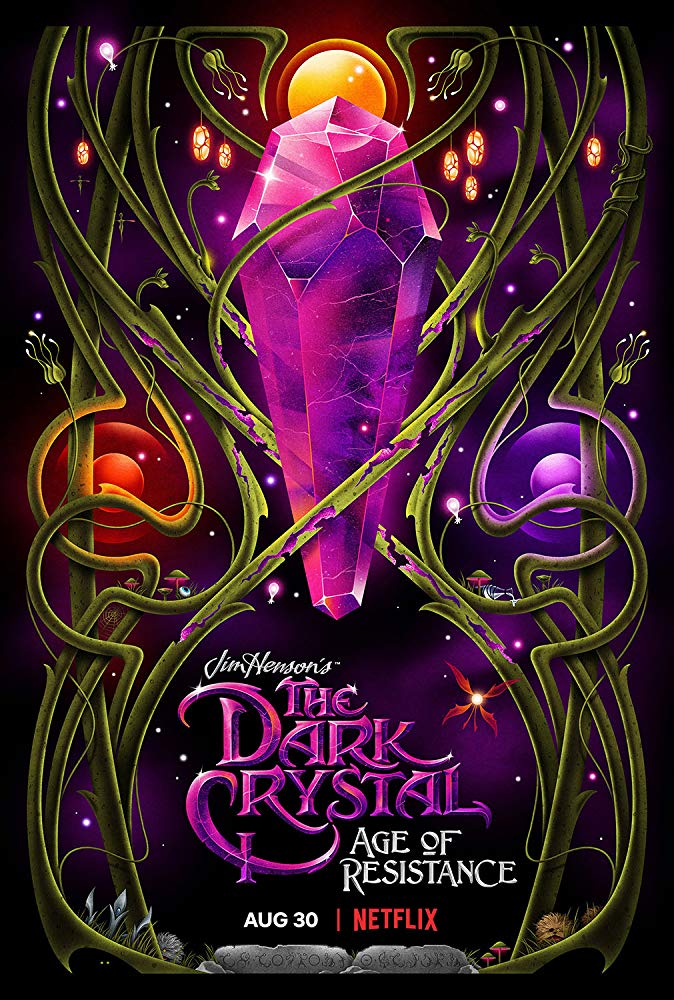 The Dark Crystal: Age of Resistance

Basically: The Dark Crystal: Age of Resistance is everything cult fanatics could want with enough adventure to create a whole new generation of fans.

On the planet of Thra, a thousand years before the Great Conjunction, the Gelfling, Podlings, Skeksis, and a variety of other fantastical creatures are living in the Age of Division. Aughra, who is both a mystical astronomer and mother of Thra, has given the Crystal of Truth to the Skeksis for guardianship and safekeeping while she travels among the stars. When the Skeksis abuse the power of the crystal it becomes dark and there is a shift that can be felt by all life on Thra. 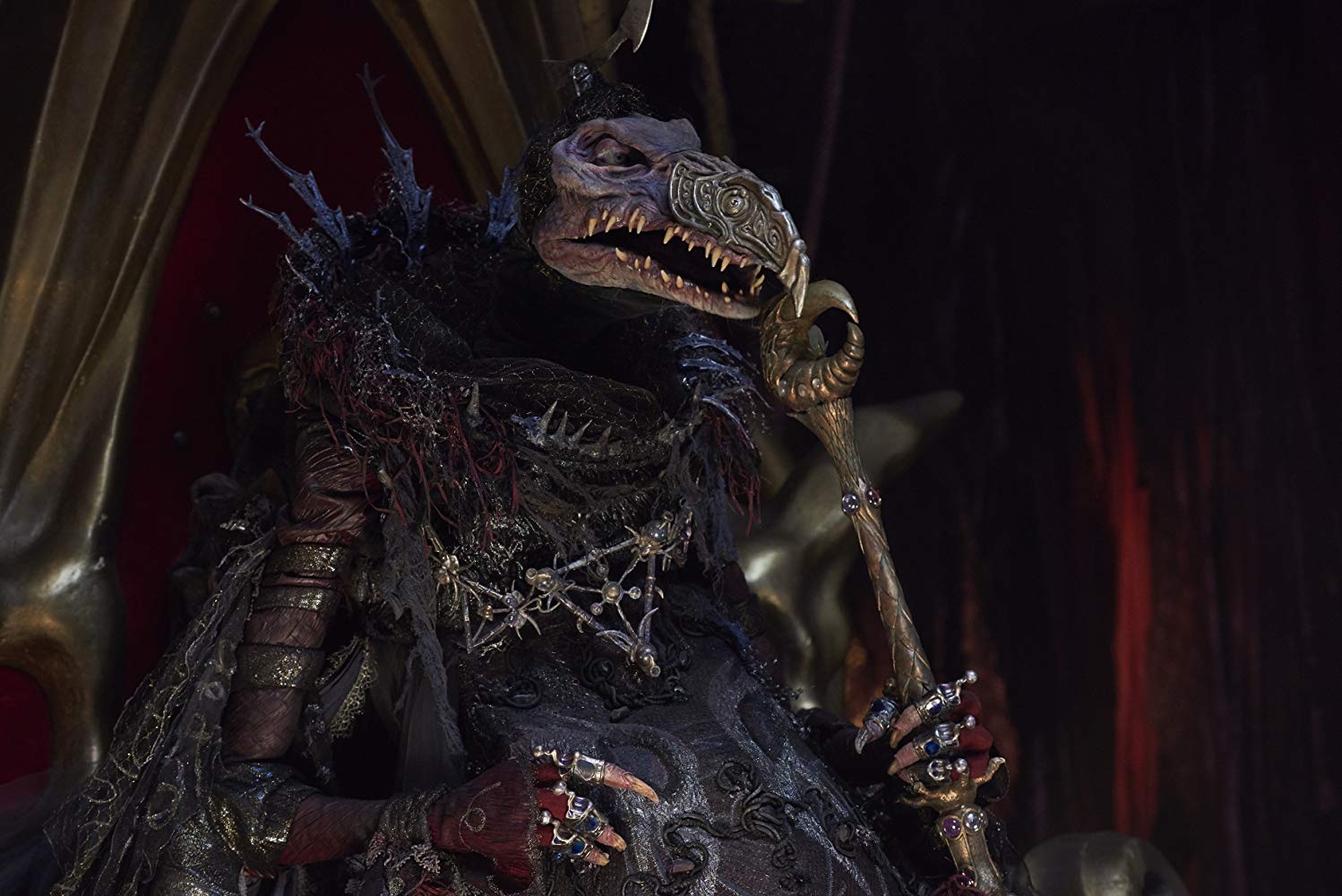 Dark signs are emerging for the Gelfling. A blight on the land has negatively impacted the Gelfling’s ability to pay tax to their Skeksis overlords and once timid animals have become unruly. Some have had visions of symbols that have no meaning. Others are seeing signs they recognize from books. Thra has fallen victim to The Darkening and no one knows why—no one but Rian, that is. Rian (Taron Egerton) is a guard in the Castle of The Crystal. His drive to live up to his father Ordon’s (Mark Strong) greatness thrusts him in the forefront of a violent misadventure placing him directly on the path that may make him a legend in his own right. 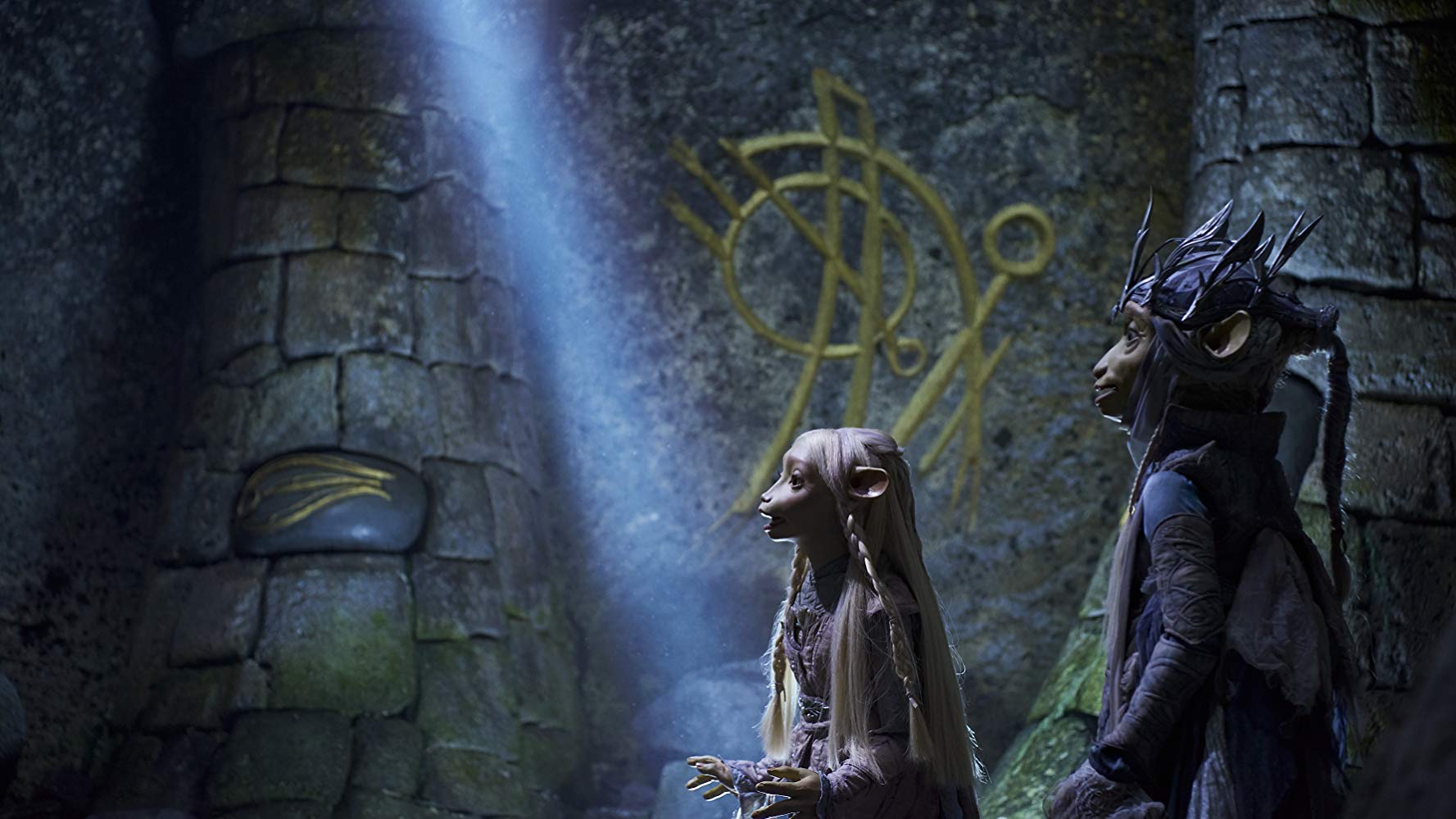 Brea (Alice Dinnean) is the youngest daughter of the Al Maudra (Helena Bonham Carter). As a winged princess of the Vapra clan her access to what’s just out of reach, combined with her love of knowledge allows her the confidence to chase a truth she believes only she knows. When the Grottan clan Gelfling Deet (Nathalie Emmanuel) emerges from her home underground she has the hardest go of the adventurers. Often persecuted for her clan [read: race] and working without resources, Deet’s kindness and ability to connect with “lesser” life forms gives her character’s dedication to her quest an earnestness and integrity. 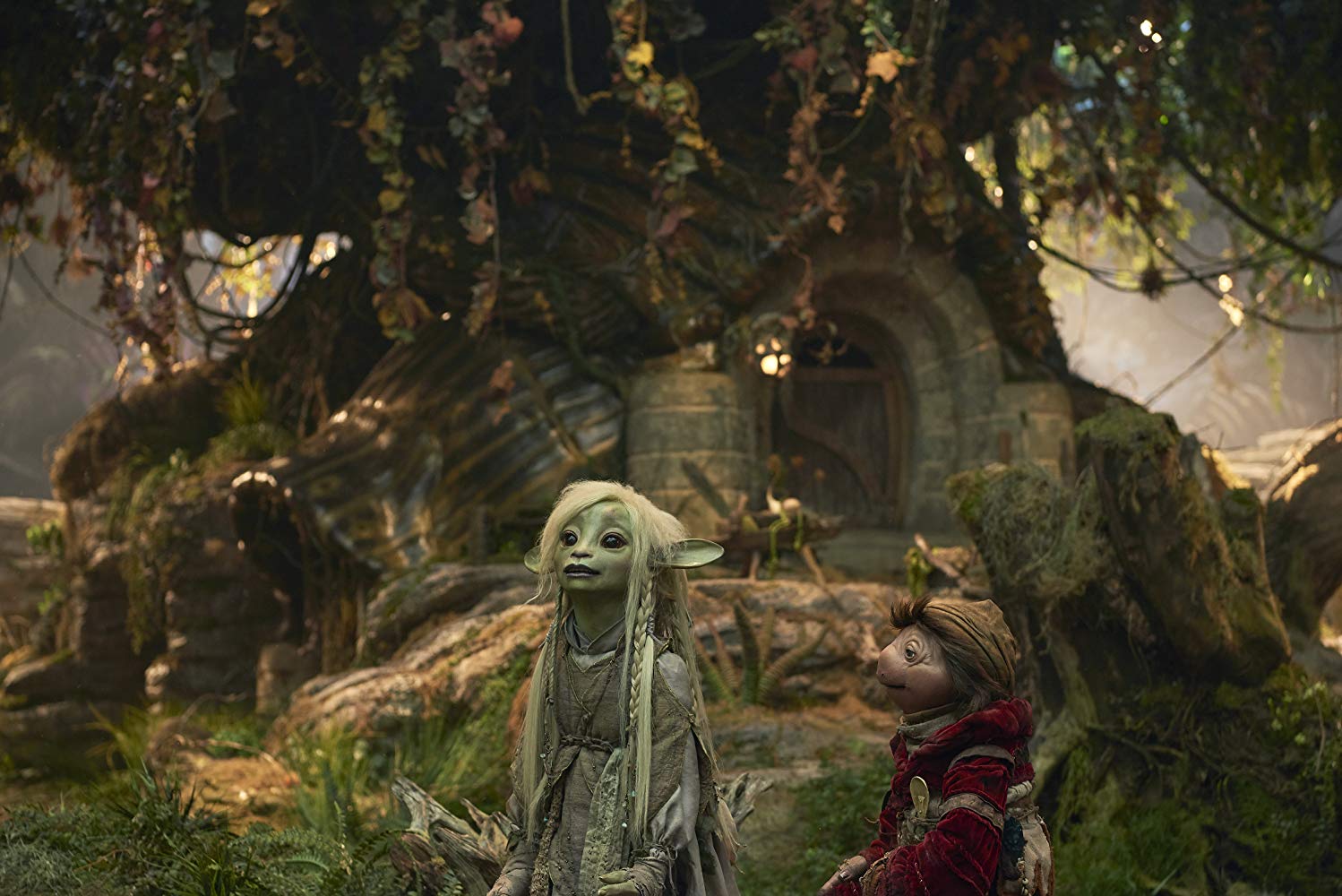 In a world of injustice, a few Gelfling persevere to rebel against their oppressors and restore the natural order of life on Thra. The Dark Crystal: Age of Resistance has the fantasy storyline you’d expect but be ready to encounter the unexpected. With so much going on in this well-woven tale there is something for everyone. The silly elements of Jim Henson Company are still laugh out loud and adorable and the interpersonal struggles of the Al Maudra (clan leader) family are almost tabloid-worthy. Just when you think you might know who the hero is, the writers introduce a new character with enough potential to keep you guessing as to who is really going to restore order to this planet that is so out of balance. 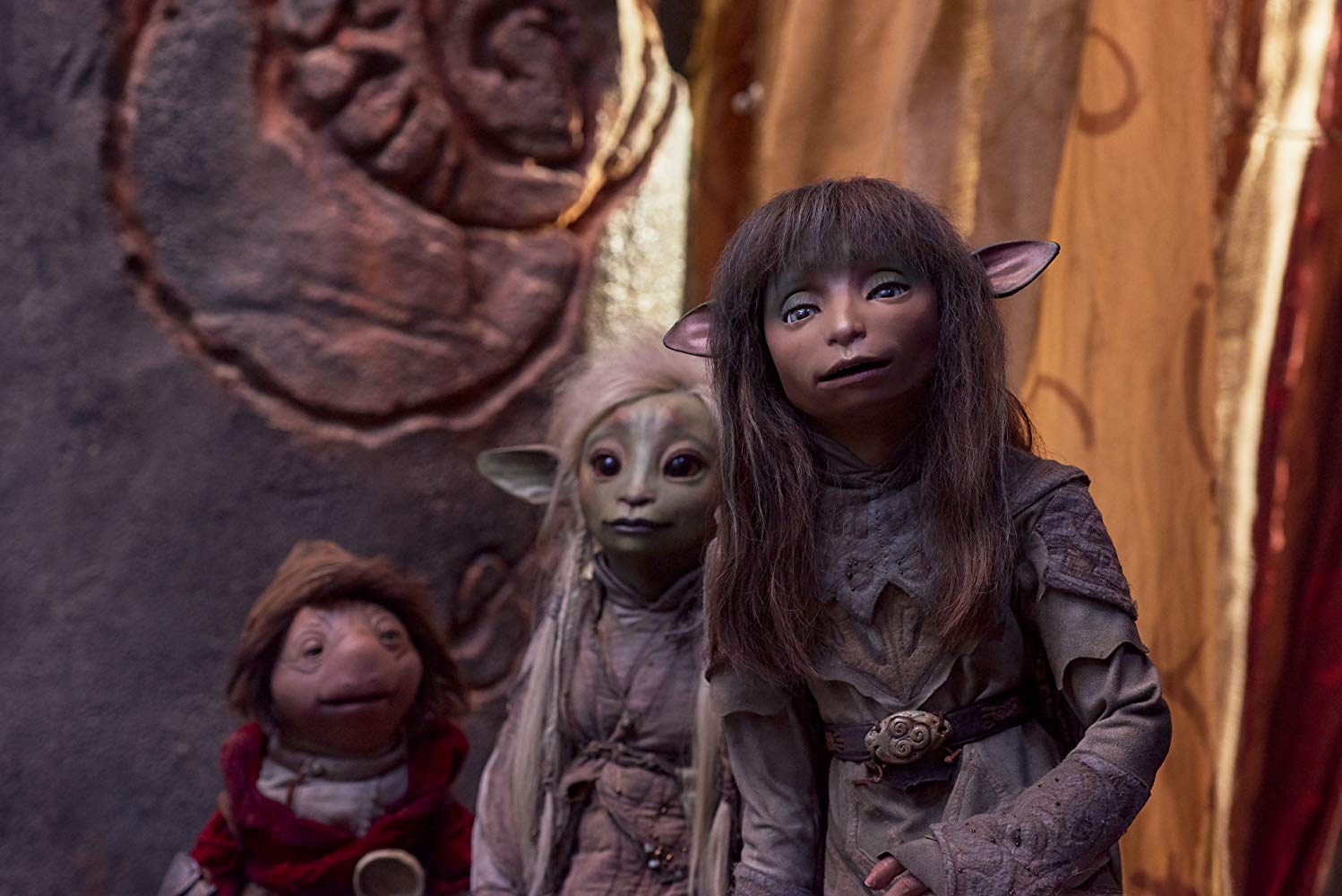 Producer Lisa Henson used “the wall of destiny” from the original film as a starting point, developing the idea of who the Gelfling are and what their civilization was like. Where in the 1982 classic we only met 2 Gelfling, the new Netflix series shows us their entire society. Seven clans that have their own specific cultures and, sometimes, problematic hierarchy. Under their oppressors, the Skeksis, not every Gelfling has the well-being of every other Gelfling in mind and some individuals are complicit in the oppression of those they believe to be beneath them. Thanks to the extensive note-taking by Jim Henson and Frank Oz on what happened leading up to the events in the 1982 film, writers Jeffery Addiss and Will Matthews were able to craft a story that expands the world provided by the original masterpiece. Where some story points are in direct conflict with dialogue from the original if you chalk that up to a character trying to seem like they are less to blame it’s easy to set the issue aside. The writers leave behind being able to hear the main character’s thoughts, probably because there are more principle characters in the new series. The switch is a welcome change. It might have as much to do with the elevated ability of the new Jim Henson’s Creature Shop creations as the writers’ method of story crafting. It’s a beautiful fantasy adventure where each individual’s journey develops their strengths through challenges overcome. The amazing cast that lends their voices to the brilliant puppetry of Jim Henson Company includes Awkwafina, Mark Hamill, Lena Headey, Jason Isaacs, Eddie Izzard, Keegan-Michael Key, Benedict Wong, and Sigourney Weaver. 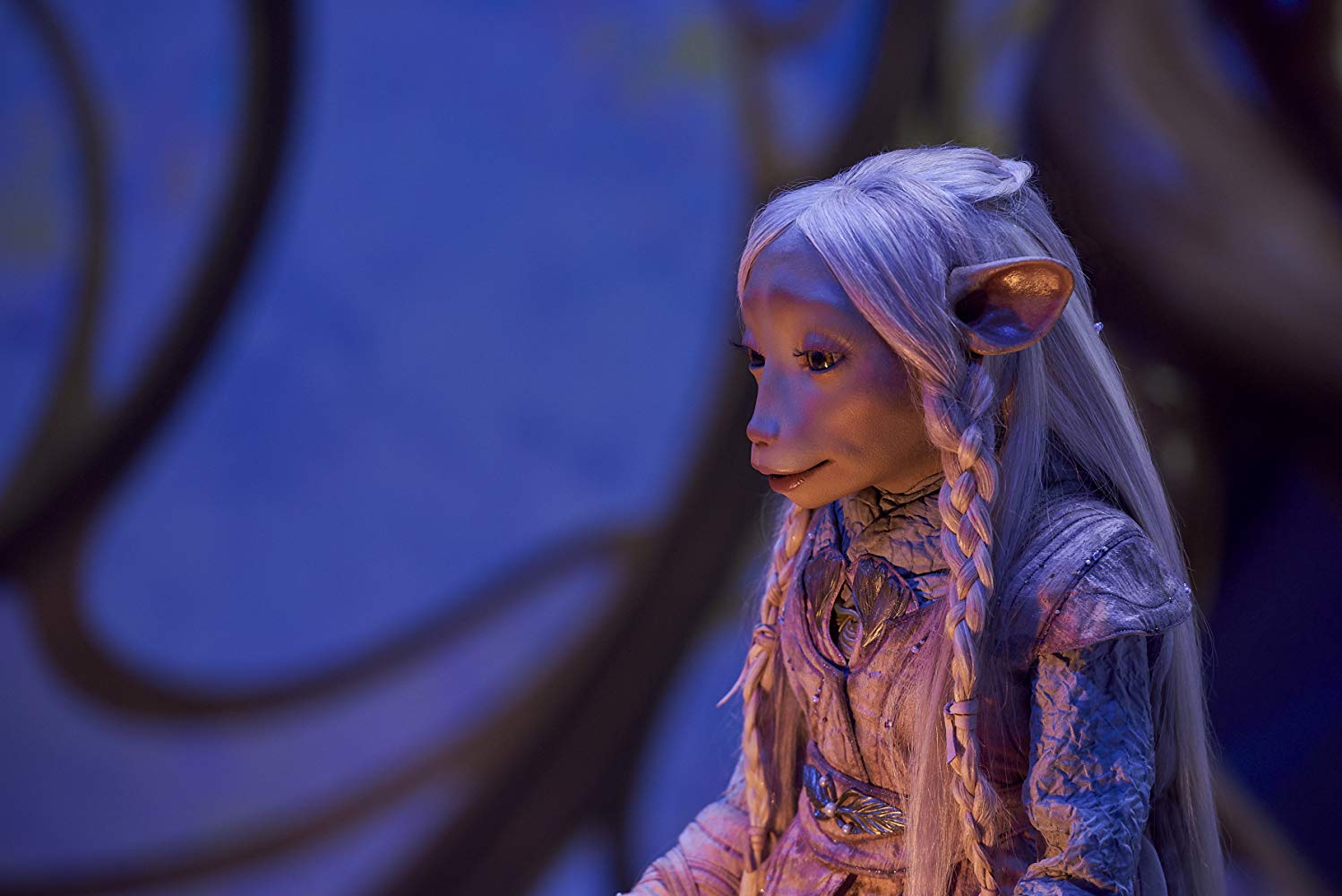 The Dark Crystal: Age of Resistance is an artistic gem that honors the original film, in a visual feast that adheres loyally to its source material which is satisfying for purists. Filmed at London’s Langley studios and directed by Louis Leterrier, the series retains the look of The Dark Crystal film from 1982 by relying primarily on puppetry but CGI was employed to remove puppeteers or strings and to create some of the backgrounds. Age of Resistance would have been a disaster if it had been approached with disregard to the puppetry of Jim Henson. Craft-persons at Jim Henson’s Creature Shop in Los Angeles created 20 principle character puppets and over 90 other puppets for the production that were then transported to London for filming. Part of the beauty of both the classic film and the new series is the human element of artistry that breathes life into each character. CGI and digitally animated features can be beautiful and touching but there is something about the art of puppetry used in both installments of The Dark Crystal that is breathtaking.

In the end: The Dark Crystal: Age of Resistance is an artful wonder, it’s bounty of talent is supported by its history and the creative team that brought it to fruition. A treasure to be watched for years to come.