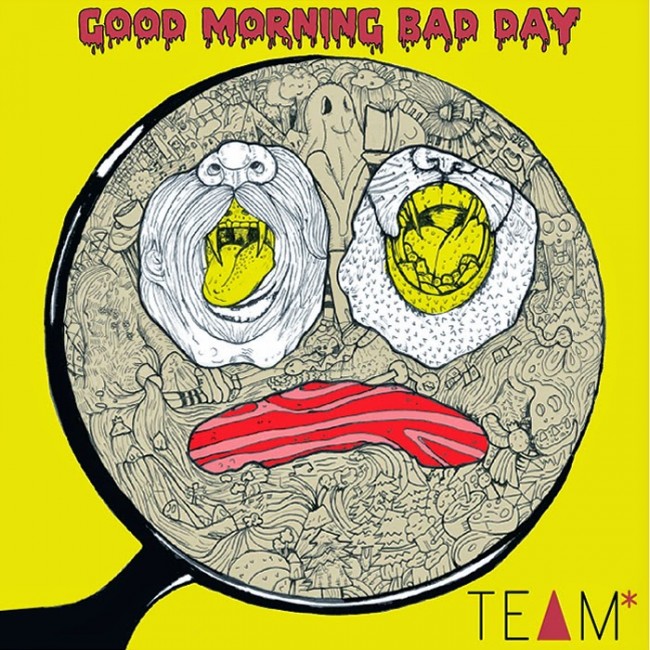 Here I am alone in my room, having the time of my life.

Coming to you from Dallas, Texas, TEAM* seem to have a score to settle with half-hearted indie music. The oversaturated genre hasn’t seen the amount of heart that saturates their latest release Good Morning Bad Day in a long time.

Opening tracks are defining moments, giving you a first glimpse at what the band is about to create right before your eyes or, more appropriately, your ears. The initial song on this collection, “The Man In A Suit With His Eye To The Sky,” does a marvelous job of summing up the collection at hand. It finds its start with an acapella moment, before giving way to a doubtlessly indie track. Funky verses flow into slower choruses that make it seem as though you could walk on air, and by the end of its three minutes and forty-two seconds, your spirits will officially be lifted.

“Alone In My Room” offers up another important quality from the band–near perfect slow songs. An acoustic vibe wraps its way around the sleepy, sad track. Meanwhile, hints of Americana blues creep in, bringing to mind the sound of Nick Santino’s solo project. You’ll find the only time you want to listen to this track is while alone in the confinements of your own space, proving the title true.

The rawness of the drums in “Still Don’t Know You’re Wrong” is one of the best elements found on the album, and they eventually give way to one of Good Morning Bad Day’s most dazzling tracks: “All The Time.” Another of the band’s flawless slow tracks, it has a cool indie pop edge to its quiet demeanor. There’s a certain groove in its notes, which makes becoming hopelessly addicted to the track unavoidable.

If you’re looking for music with a little more speed, “Say My Name” will cater to your desires. A fuzzy, old style rocker, it transports you right to a tiny club covered in graffiti. The pop flavored chorus makes for an interesting change of pace, ensuring that the last thing you’ll feel while listening is boredom.

At the end of the day, TEAM* do nothing but impress with the release of Good Morning Bad Day. A solid collection through and through, the band is breathing life into a genre that has become a little too popular for its own good. With an album this impressive so early in their career, limits are nonexistent. Wherever they should go from here, we’ll be along for the ride.

Buy It, Stream It, Skip It: This is just the beginning of what’s to be a fantastic discography. Buy it.