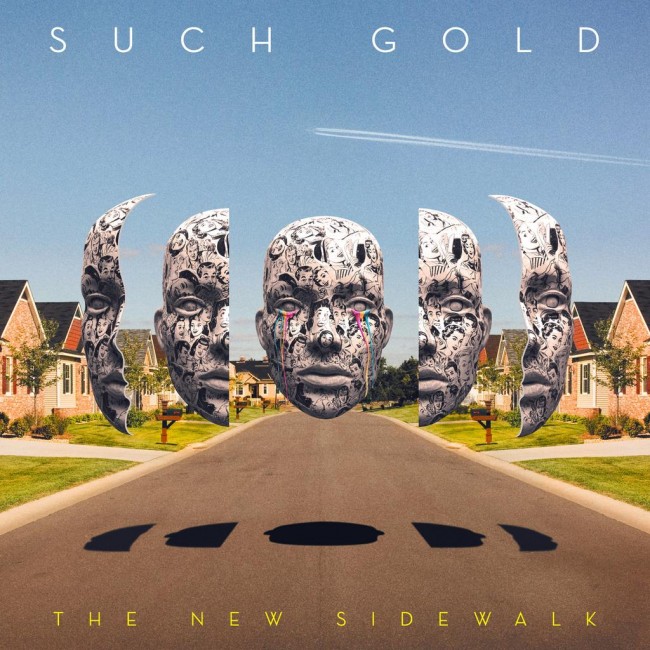 “I’ll trade in my new life for a brand new escape.”

Such Gold’s The New Sidewalk comes at a pivotal time for the band. Having been through more than their fair share of ups and downs, it would have been easy for the four remaining members of the New York-bred act to quietly implode. However, it doesn’t seem to be in the blood of these hard working, hard rocking musicians to just give up. Proof enough is in the album itself. Give it a listen, and you’ll come across a myriad of emotions and musical styles–maybe too many, at certain points–but one thing you won’t encounter is any sign of defeat.

Things start out solid with “Engulfed In Flames,” a song that strikes an even balance of well-known hardcore punk elements and creative takes on those elements. Staying true to the collection’s name, it leaves you feeling like you’ve just taken a stroll down a new sidewalk in the same town you’ve grown up in. Such Gold carry an irresistible rock edge with their pop punk swagger, and “Axed Away” is the perfect example of that. The strange, ever-changing tempo of the song flows between sonic influences with ease. When it knocks the speed down by just a couple hundred notes a minute, you can pick up on an emo influence that takes things into Taking Back Sunday’s territory. All of the genres displayed on the track can be a little too much to take in at times, but they also make for one of the more interesting, and more original, offerings on the album.

“Food Court Blues” has an overwhelming resemblance to 90s alt-rock frontrunners like Foo Fighters, yet maintains a modern pop punk edge through shouting vocals. Meanwhile, each and every instrument seems to be trying to crush each other with insane riffs and beats that will see drummer Matt Covey go through fifty sticks in one play.

Not long after, “I Know What I Saw” comes into focus. Throughout the previous tracks, Such Gold have given us taste after taste at what they might be able to do with a calmer song, but this is the one to show us all of their cards. It gives off the vibe of a garage band, but one with undeniable talent that would quickly become the talk of the neighborhood. Not a single moment of the song is cohesive, yet it’s all tied together so neatly you can’t help but fall in love. Story-esque lyrics are delivered perfectly by vocalist Ben Kotin, and before you know it you’re transported into a scene of stars in the sky and mysterious atmospheres. All this is said without mentioning the real highlight of the song, the warped perfection that makes its way out of the guitars. You’ll soon find that the more you listen to it, the more irresistible it gets. It’ll first be a good song, then a great one, and by the third listen, it’ll be the only tune you think about.

Kicking things off with SoCal, skateboard punk, “Morrison” takes its place center stage before delving a little further into the emo edge heard earlier in the collection. There are less elements thrown into this track, making it feel like a stripped down version of Such Gold. Given the taxing velocity of the album up until this point, it’s not a bad thing. A good crowd reaction is inescapable for a track like this, with enough emotion poured into it to make a real connection with any and all who listen.

The album finds its close with title track, “The New Sidewalk”. Slow, moody guitars lead you into the Sum 41-esque track. The pattern of emo-punk sounds make an appearance here as well, and paired with the choppy vocal delivery, they would probably find a good home at a performance in a skate park. Or an empty pool. Or any number of the cool places we saw our favorite bands “play” in the music videos of the 2000s.

Some of the attributes the bands claim so proudly on The New Sidewalk are easily muddled when there’s so much going on, but the times they’re given room to breathe allow you to experience how flawless they truly are. This is an album that gives a good view of both sides the band have to offer. Whether they’re taking on a song with a few too many leads, riffs, and tempos, or slowing things down to give each quality of a track its proper spotlight, they still manage to produce kickass music that will do incredibly well live–and result in hundreds of Tumblr posts.

Skip It, Stream It, or Buy It?: Stream it when you’re in the mood for something off the beaten sidewalk.