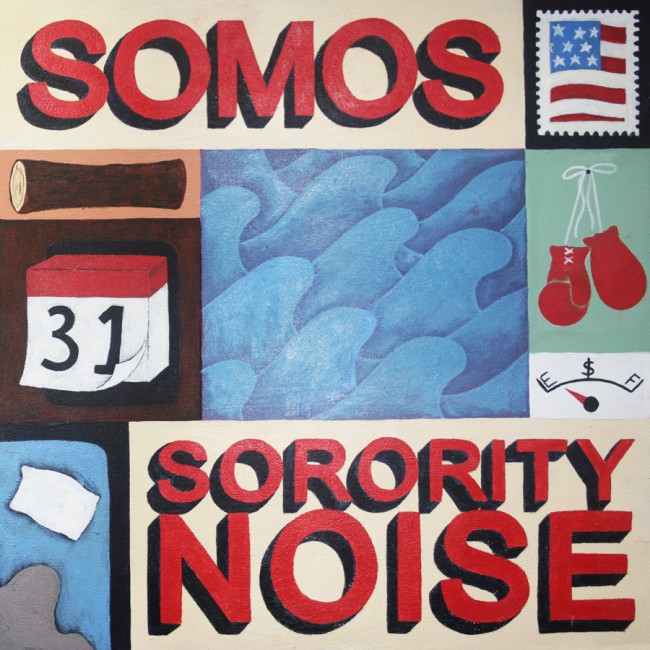 Somos and Sorority Noise have enjoyed almost parallel careers so far, emerging as two of the most promising disciples of the proliferating indie/emo scene. Both bands started gaining buzz at the beginning of this year with critically-acclaimed debut LP’s, Temple of Plenty and Forgettable respectively. Following their album releases, both continued to bulk up their rÃ©sumÃ©s playing with prominent peers such as Into It. Over It., Modern Baseball, The Hotelier, and others. Now at the tail end of a successful year, they have teamed up to release a couple more sonic reminders of why you’ll want to keep both these bands on your radar.

Somos kick off the split with what they do best. “Letters to an Absent Future” is essentially a continuation of what fans loved on their full-length: warm encompassing guitar layers, smart lyrics that effortlessly roll of the tongue in Michael Fiorentino’s signature deep tone, and an understated catchiness outlining the track. The band utilizes the same thick production courtesy of Jesse Cannon that makes it feel like their music is hugging your ears. Their second track, “Back and Forth,” is a slightly poppier ballad that transcends their associated genre, perhaps approaching what Transit have been aiming for recently but in a much less erratic method. There’s a distinct amount of pop sensibility in the guitar riffs, backing “oh’s,” and especially the falsetto in the bridge that prevents labeling Somos as just another emo punk band.

Instead of two straightforward tracks, Sorority Noise get more conceptual with their side. The first track, “Dobranoc” (which means good night in Polish), runs just over a minute and a half in length. With low, mumbling vocals that crescendo into a howl at the end, it feels more like an experimental interlude you would expect to find on their next album. Instead, it effectively serves as an intro to their second track, “Wesleyan’s Best Dressed” – one of their best songs and the strongest on the split. The bright guitar riffs at the beginning immediately get you excited to hear the rest of the song. Cameron Boucher’s vocal melodies, especially in the impassioned chorus, sound like a combination of scene favorites Into It. Over It. and The Front Bottoms. Like Somos, Sorority Noise also genre-bends in their last song with a guitar solo bordering classic rock at the end.

For the more ignorant music listeners who grumble that all these bands sound the same, you can effectively use this split to prove them wrong. While Somos resemble the rock that stands steadfast in a current, Sorority Noise are more like the river that moves fluidly around it. This split is not exceptionally groundbreaking compared to their debuts, but rather shows the steady progress of two up-and-coming bands confidently refining their sound.

Skip It/Stream It/Buy It: Buy it, because this will one day be a rare collectors’ item when both of these bands blow up.