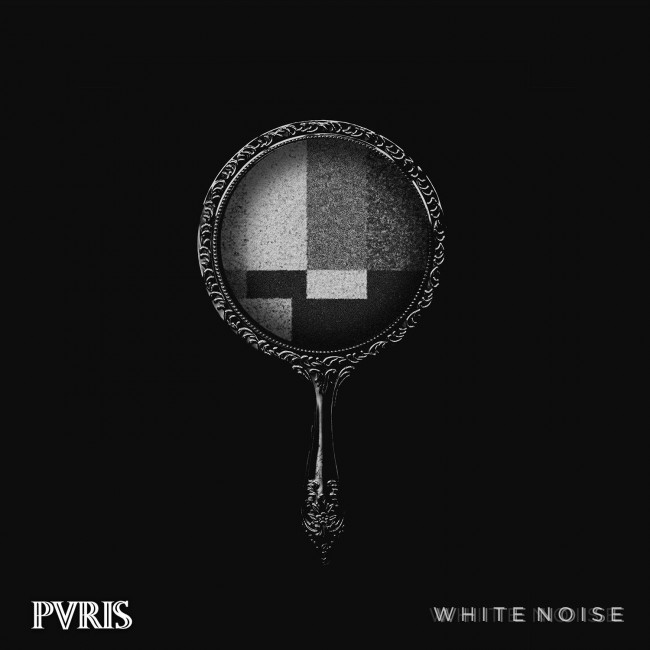 Been trying to speak for weeks and weeks / Open my mouth, but all that comes out is white noise and incomprehensible sounds

As someone who loves pop music but hates how vapid it usually is, White Noise feels like the album I’ve been waiting my whole life to hear. Equal parts style and substance, the songs on PVRIS’s debut full-length are as meaningful as they are infectious, making you dance around your room like a madman before collapsing on your bed to reflect on their emotion. While the album is a significant musical turn from their self-titled debut EP, traces of the band’s post hardcore past are strewn across the ten tracks, blending perfectly with their undeniable pop sensibility for a sound that’s simultaneously fresh and familiar.

“Smoke” is a perfect opening to the album, introducing the main components of the band’s reinvented sound: syncopated melodies, ambient guitar work, and pounding programmed drums against a wall of synths. Although the song stays firmly rooted in its minor key, it’s impossible to listen to without bouncing along to the pulsating beat. This balance of light and dark has always been a defining characteristic of the band’s music, and “Smoke” makes it clear that that’s one thing that won’t change on this record.

Before you have time to catch your breath, “St. Patrick” carries you away on a wave of keys to a land of pop perfection. It’s catchier than anything that has hit the Billboard charts this year, instantly lodging itself in your head with its unforgettable hooks. And second single “My House” proves that the genius of “St. Patrick” is no fluke–the band has a grasp on songwriting that’s usually reserved for music you have to feel guilty about loving.

Once you get past the Disney imagery conjured up by the repeated “poor unfortunate souls” line (just me?), “Holy” is a biting critique of those who flock to religion for self-serving purposes. The tempo slows, but vocalist Lynn Gunn’s razor-sharp tongue doesn’t–lines like “You put on a faith facade, think you’re holy when you’re not / I hate to break it to you baby, but you’re simply lost” cut deep over the song’s haunting, stripped-down arrangement. Meanwhile, title track “White Noise” was an obvious choice for the third single with its soaring chorus that could have easily been rearranged and sold to a mainstream artist. That’s part of what makes this record so irresistible–the hooks are catchy enough for top 40 radio, but the music has an edge and heavy influence to it that makes them a better fit for Rise Records than Ryan Seacrest.

The album is front-loaded with its strongest tracks, so while the second half is still fantastic, it never quite reaches the same heights as the first. “Eyelids” is by far the highlight of side B; a devastating love song about the struggles of distance, it showcases the band at their most vulnerable and dark. On a record that deals heavily with themes of haunting and the supernatural, it’s this song (which doesn’t mention either) that sends shivers rushing down your spine. And “Let Them In” closes the album on a high note–both literally and figuratively–with some of the most powerful vocals Gunn has ever committed to tape.

While PVRIS have certainly established a clear sense of identity with their sound, the only complaint is that the tracks begin to somewhat blend into one another at a certain point. Songs like “Mirrors” and “Fire”, while perfectly fine in their own right, just can’t live up to the insanely high bar set by a smash hit like “St. Patrick”. There are moments when it feels like band could have pushed themselves harder to get out of the comfort zone they establish on this album, and older fans might daydream about how the dynamic lead guitar work of their earlier music might have complemented some of the songs. But these are extremely minor complaints, especially for a debut full-length–and if the quality of this album is any indication, they’ll have plenty of time to explore their sound further as they build what is sure to be a wildly successful career.

White Noise isn’t just an incredibly impressive debut record–it’s an incredibly impressive record, period. It’s pop music with purpose, a perfect balance of sweetness and substance. PVRIS have unleashed themselves upon the world in the biggest way they could have, proving beyond a shadow of a doubt that they’re one of the most exciting new acts out there. Now there’s something to talk about.

Skip It/Stream It/Buy It: Buy it – this is one bandwagon you won’t want to have drive away without you.