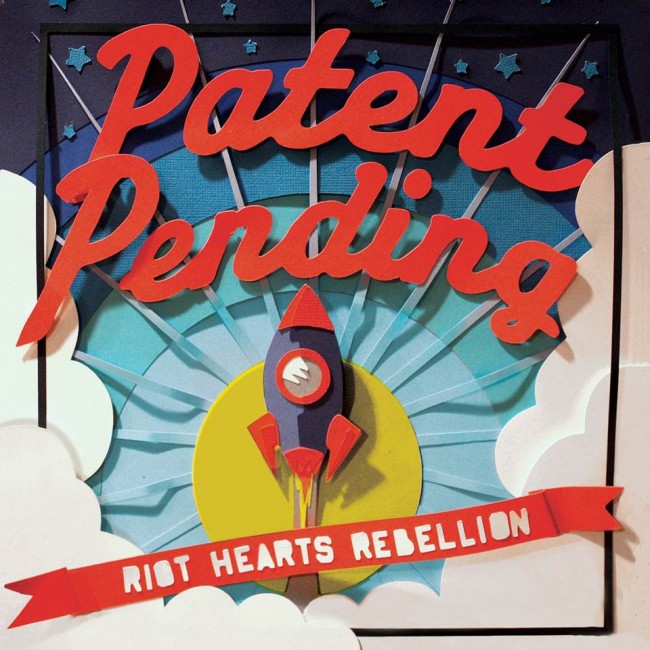 “I was awkward, paranoid, so scared that I’d barely speak / ’til I said fuck it, they can suck it, it’s more fun being me”

You should never judge a book by its cover, just like you should never judge an album by its intro song. The floaty, a cappella opening track of Riot Hearts Rebellion should feel more at home opening a Panic! At The Disco album, and will make you ask, “is this Patent Pending or am I being Punk’d?” Look up! There’s a camera, and one over there too. You’ve been pop-punk’d! Just kidding–but you’ll feel that way when the next track “Until The Sun Comes Up” kicks off and knocks you flat on your ass. From the get-go Patent Pending are pulling pranks on you, because it’s clear from the rest of the album they could never lose that fun-filled pop punk magic they’re known for, delivered with all the energy of a toddler hyped up on sugar.

Their trademark not-so-tongue-in-cheek humor game is especially strong in “NSFW (.)(.)” (the title should give you some indication that, nope, they still haven’t grown up), but our personal favorite example is “Dating A Dick”, a high school prom style ballad complete with crooning vocals and soft “wah wah wahs” to accompany a rather, um, candid observation. The on point-ness of this album doesn’t stop there. “Started In My Head” brings a riff hat-tip to pop punk legends Blink-182, just one of the many pop culture references cleverly woven in–Patent Pending may act the fool, but they’ll make a fool out of you as you realize just how many layers to the music you miss first time round.

But in a final twist, Riot Hearts Rebellion ends with a real underdog anthem, which is the best representation of the deeper side to the band on the album. The title track will have you chanting along for those moments you felt like you didn’t fit in, and you’ll see that’s the best way to be. Because sure, Patent Pending are the misfit jokers, the class clowns, but they’re also a tight-knit family, they’ve always got your back, and just like true underdogs they’re always, always one step ahead of you.

Buy it, Stream it, or Skip it? Buy it and support these lovable jerks in any way you can, they’ve earned it.