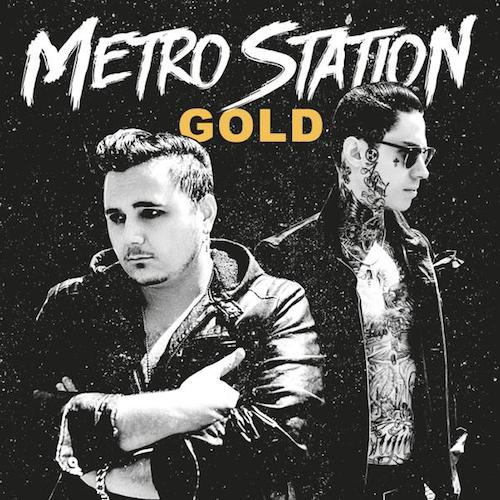 If one thing is certain about Metro Station’s new EP Gold, it’s that the electro-pop tunes will make you “Shake It” like it’s 2007. Fact. And I mean that in the best possible way. While we haven’t heard much from the duo–comprised of Trace Cyrus and Mason Musso–collectively in about five years, Gold is great by Metro Station standards and serves as a promising step forward for the band, but there’s definitely room for more variety. The EP also perhaps should have been released during the summer months; with all its upbeat, electrifying tunes, I imagine the record spinning at a rooftop party full of sweaty folks dancing together in the hot summer air. But, then again, we could do that in the winter too. Who’s down?

“Love & War” starts the EP off with a positive bang, reeling in new and old Metro Station fans alike with their pulsating, electronic vibes. But it’s quickly evident that something has changed. The boys have grown up. The new sound is welcomed with open arms as Cyrus’ voice dominates with strong, mature vocals that demand attention and display an evident progression from the “Shake It” era.

The second track, “She Likes Girls,” delivers yet another Metro Station staple with an energetic, pulsating chorus. The track gives off a Katy Perry “I Kissed A Girl” vibe and would undoubtedly be the song to put on repeat for the dancing partygoers. But after hearing these two tracks, it doesn’t seem like much has changed since the band’s hiatus except a little growing up: The vocals are better. The tracks are a bit more experimental and less repetitive as far as their musical composition goes. But I still want more.

The title track “Gold” is definitely the song to remember and take away from the EP, and it’s here that the guys deliver on my “want more” craving. The entire tone and mood changes here as the band seems to experiment with new sounds a little more. The intense, heavy drums give a sense of urgency, and as Cyrus sings about reaching for the stars and chasing dreams made of gold, you can’t help but hope the band continues chasing their dreams even if they did just create an EP that’s…well, pretty golden for them.

The last two songs “Forever Young (feat. The Ready Set)” and “Play It Cool” close out the EP with the upbeat, typical Metro Station sound–nothing more and nothing less. The band may have improved since their last full-length album in 2007 and perhaps have finally graduated from “Shake It,” but with all the time that has elapsed without Metro Station active in the scene, I’m still left wanting more. Gold ups the ante for Metro Station as a band, but overall boasts nothing more than good dance tracks.

Skip It/Stream It/Buy It: Stream it, so the music will keep playing, and you won’t have to stop dancing.