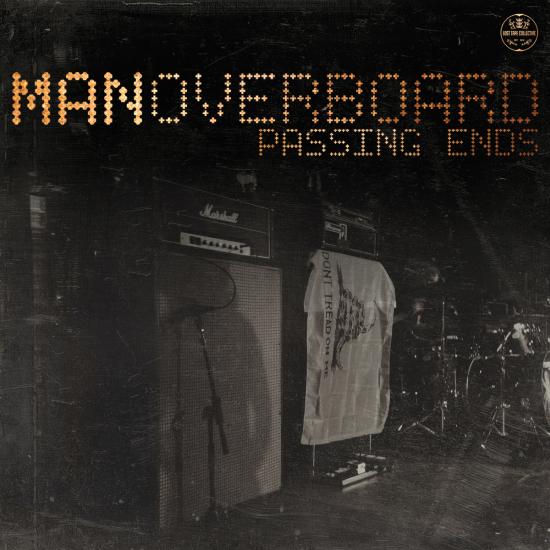 This year has been a roller coaster for the guys of Man Overboard, to say the least. Guitarist/vocalist Nik Bruzzese suffered the loss of his father earlier this year, which took a toll both on himself and the band. On top of that, the group was recently forced to postpone their fall European tour after Bruzzese tore his ACL and needed some time to get back on his feet. But, great pain inspires great music, and Passing Ends is the perfect representation of that.

The EP kicks off with the gorgeous ballad “Twenty Years”, whose lovely acoustic guitar melody provides feelings of both urgency and self-reflection as Zac Eisenstein laments, “What’s it like to finally see the sun / After twenty years of tryin’ / To be okay?” Some consider Man Overboard’s acoustic work to be some of the greatest in the genre, and this track is a prime example of how much power can be found in stripped down instrumentation.

The title song, “Passing Ends,” is the only non-acoustic track on the album and features incredibly strong vocals from Bruzzese. When he belts, “Now suddenly I’m dead”, you feel every ounce of pain the singer has been through within the past few months. And the closing guitar line will give you shivers–it feels as though we’ve found closure for more than just the song here.

There are so many great lyrics on this EP, and “Stood Up” is just a gold mine of brilliant Man O phrases. Eisenstein’s voice really shines in this song, particularly when he sings, “You won’t feel better in the morning / I’ll still exist / And you’ll still feel incomplete” Every word sounds like it’s coming from a very real place, making you want to shut the world out and get lost in the words.

An acoustic version of the fan favorite “Secret Pain” follows, and fits so well into the general flow of the record that it sounds as if it were written for this album rather than the previous one. There’s something about Bruzzese and Eisenstein’s harmonies that is just so compelling to listen to, even if I can tell they’re from South Jersey from their accents (from growing up in South Jersey myself, I understand the struggle).

To close out the album, we have the beautiful “For Vince,” the group’s homage to Bruzzese’s father. The color of desperation and grief in the lyrics provoke such vivid imagery, once again taking us far away from the world around us. The combination of the soft acoustic guitar and light tamborine is enough to give me little goosebumps down my arms. If Man O decide to play this one at their gigs, it would be such a gorgeous experience for the band and fans alike.

Overall, Passing Ends is a great representation of Man Overboard’s maturation as a band. Their acoustic strength has been proven time and time again, but the lyrics on this album are some of the strongest from the group. This EP showed just how much this band has grown up in the past year and remind us all how much beauty can be found in pain.

Skip It/Stream It/Buy It: Buy it. And while you’re at it, buy tissues for when “For Vince” rolls around.