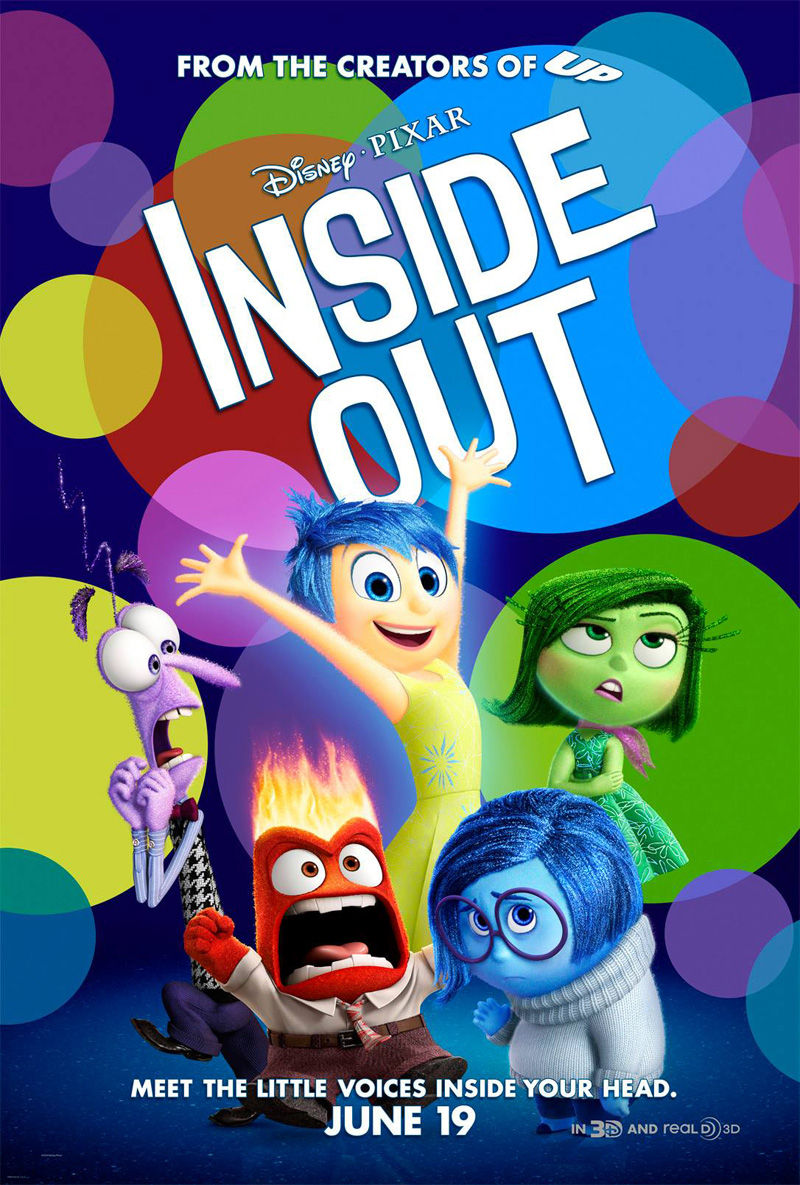 Basically: Dive into the weird and wonderful mind of an eleven year old who is having a terrible, horrible, no good, very bad day—and it’s up to her anthropomorphized emotions to save her.

Apparently being eleven was way more difficult than we remember—we had to deal with five emotions. FIVE! Enter the feels brought-to-life: Joy, Sadness, Fear, Anger, and Disgust. Because it couldn’t get more complicated than that, right? (We’re expecting a whole different sequel when she hits puberty and Emo joins the cast. We’re betting on Inside Out 2: The Black Parade). All jokes aside, it’s refreshing to see a film acknowledge children’s feelings as valid, more complex than they first seem, and actually reasonable. These five emotions belong to our adorable human protagonist Riley, who is uprooted from Minnesota to San Francisco and loses herself in the process. It’s left to her emo-team to get her back on course, all from the inside out (see what we did there?).

Here’s where it gets deep—there are valuable life lessons woven in at every level. We hope kids absorb as much as they can of this amazingly well-rounded message about the importance of balanced emotions, all while enjoying the color explosion of Riley’s imagination (seriously, those amusement park lands that represent her personality traits NEED to exist in real life). But you’ll probably love it more as an adult, and wish you’d been taught these lessons when you were young. Oh, and expect to feel your very own Sadness (Phyllis Smith) take over when you realize you grew up and forgot to let your imagination—and your imaginary friend—run wild. We all had one, and in Pixar world imaginary friends are still hoping you’ll remember them. But don’t go hitting the floor in a puddle of self-pity just yet, because: 1. cinema floors are notoriously sticky and are not recommended for faceplanting, 2. Sadness does enough faceplanting for all of us in the most hilarious and scene-stealing ways, and 3. there are plenty of chances to relive your childhood through the glorious silver screen.

Besides the nostalgia, our favorite part of Inside Out was that Riley’s five emotions were all individuals who together made up a whole person. They were non-uniform, not defined by her gender, and willing to accept their differences to work in unison for the greater good. You go, Pixar, for telling kids how it is from day one. Pixar 101 really should be taught in schools. As Einstein once (loosely) said, to make your children smart, read them fairy tales. Well, in 2015, it’s show them this film.

In the end: Once again Pixar has made a children’s film for adults. Go regardless of whether you have a kid to tag along because a cinema ticket to this is way cheaper than therapy.