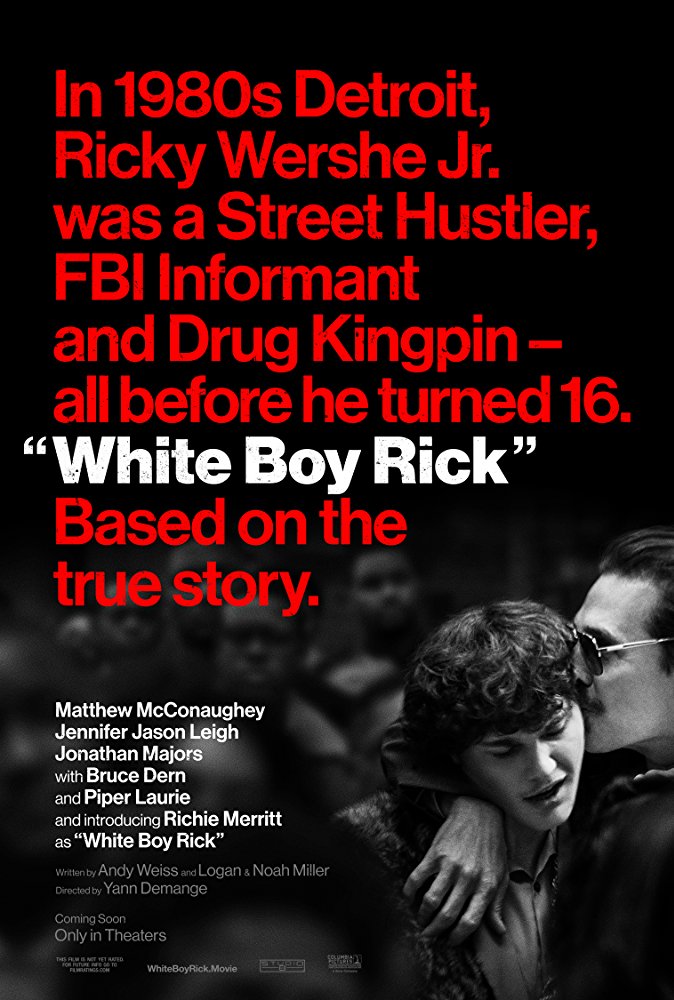 White Boy Rick tells the story of Richard Wershe Jr. (newcomer Richie Merritt), a teenager growing up in the downtrodden ghetto of Detroit in the mid-80s. He’s an industrious hustler kid who learned the game from his father Richard Wershe Sr. (Matthew McConaughey), who sells guns but dreams of opening a chain of video stores. Things go sideways for the Wershes when the Feds roll up on Richard Sr. about a gun he sold being used in a murder. While Richard Sr. stands strong, the Feds and a local narcotics cop end up pressuring the younger Richard Jr. to get involved in the local drug trade to help them take out a drug kingpin to save his father from jail. This sends young Richard, who the black folks have dubbed “White Boy Rick”, into a path of seeking the American Dream to get out of he and his family’s terrible living situation the only way he knows how—selling drugs. The kicker is it’s a skill he only acquires because of law enforcement training and those are the same people who bring him down. You can easily find out the details about this true story and its heartbreaking outcome, but the key to the film is how this story is told. 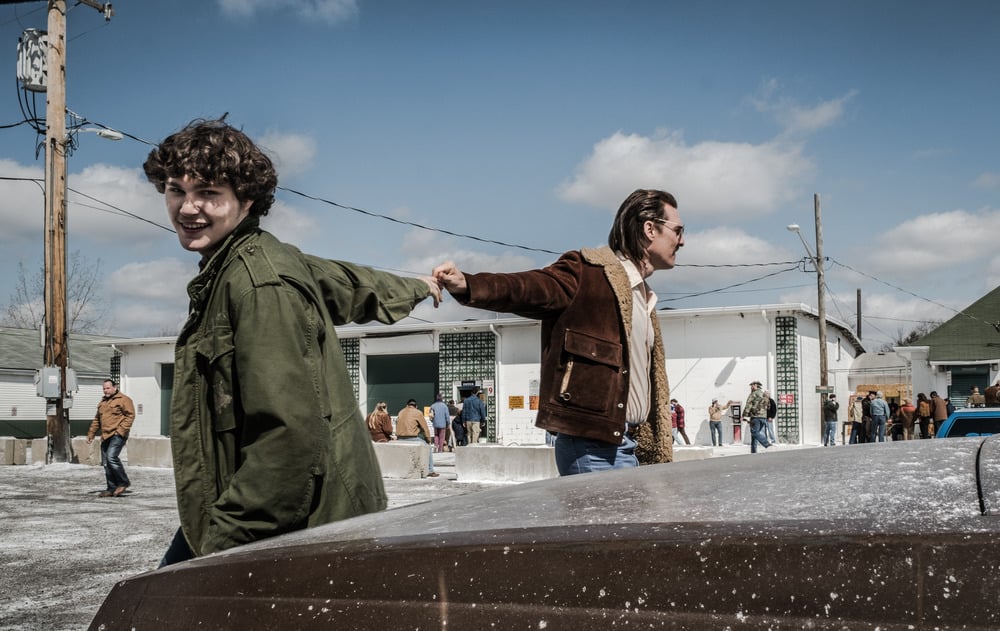 Director Yann Demange did a great job of showing the desperation of the times through the characters within the city of Detroit. The surroundings are dilapidated, there’s a feeling that everyone is doing what they need to do get by. The one thing this movie does, low key, is push a narrative that law enforcement is not to be trusted. Between the police officers on the take, to the local drug kingpin Johnny (Jonathan Majors), to the way the FBI and the police use Rick to get Johnny’s organization, and the backstabbing of arresting Rick later on; everything the law enforcement does has weird strings attached and at times feels Faustian. Especially for our fourteen year protagonist, who has dropped out of school.

McConaughey is his usual great self, continuing his McConaissance in the game. The weight of the film though is on Merritt as the young Rick. Being such a new actor, a kid himself at the time of filming, gives Merritt’s performance a certain edge of authenticity, even at times when he probably doesn’t emote as much as folks might like. Honestly, I don’t know if heavy screen emotions work as well played by a kid who deals crack—folks from the streets don’t seem that open with their feelings. The rest of the cast holds together too, with Bruce Dern as Rick’s grandfather and Piper Laurie as his grandmother. Jennifer Jason Leigh does appear as a seemingly well-meaning FBI agent and she’s able to pull off the role of getting the kid to open up and agree to be a snitch on the people he knows. Other standout performances, with little screen time that should’ve been more, are Brian Tyree Henry as Detroit Police Narcotics Detective Jackson. Henry continues the same charisma he has on Atlanta as Paper Boi. RJ Cyler, the standout in last year’s Power Rangers, shines again as Rick’s best friend Boo. Plus there are good cameos by rappers Danny Brown and YG—YG was a lot better than I thought he would be. 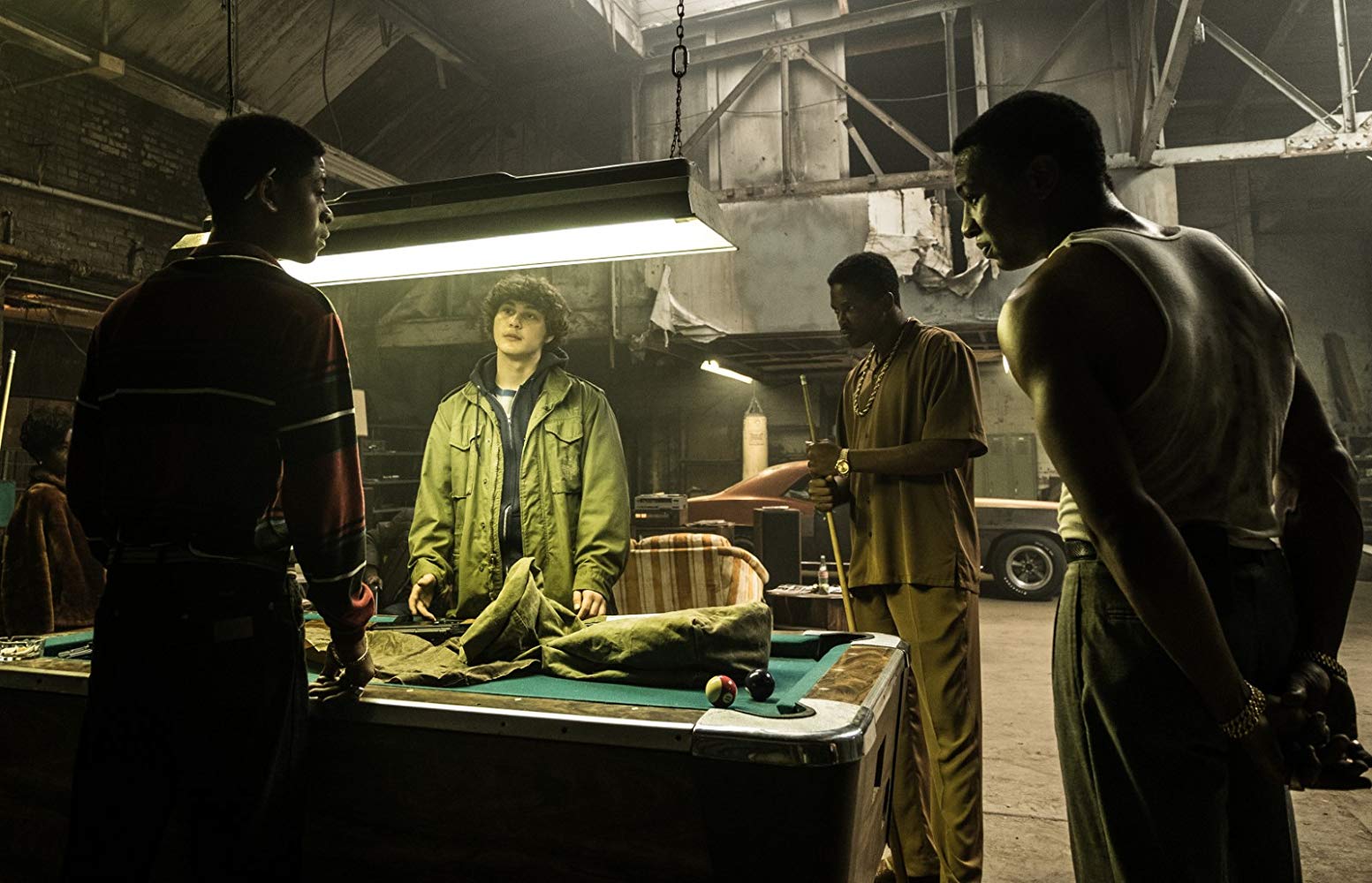 As for the score, the music cues are too on the nose at times, in terms of rap music from those years, and I’m not sure all of those songs were popping in Detroit back then. I kind of wish they’d used more techno in the background since that’s the genre’s time and place of origin. The film does have strong visuals, reflecting the tempting nature of partying with drug dealers, from the skating rink to Las Vegas—there’s a great visual language to Rick’s temptations to get into the game.

White Boy Rick is a great crime movie, coming of age film, and a cautionary tale, all set in the early times of the drug war. It questions the nature of the justice system and the types of unjust sentences that took lives away before they even began.

In The End: White Boy Rick is a sobering and well-made look into the 80s Detroit drug game.