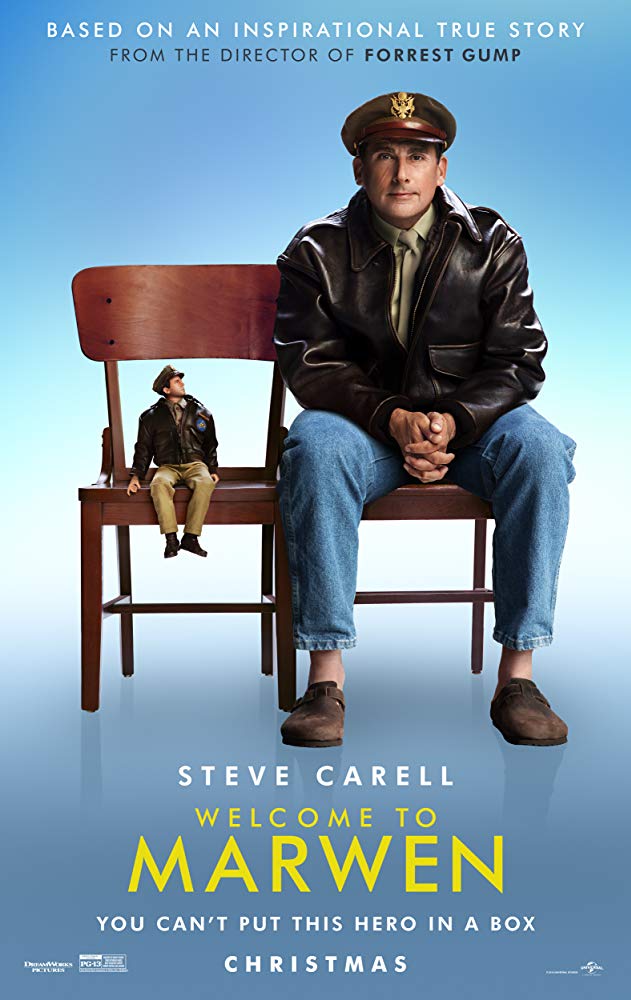 Basically: Dramatization of the 2010 documentary Marwencol with a lot of CG dolls.

I went into this movie pretty blind. All I knew about Welcome to Marwen is that some well-known actors were playing dolls. I thought it might be a new version of Small Soldiers or maybe an action figure Toy Story with actor likenesses. Man, was I far off. I never knew there was a documentary called Marwencol, which inspired this film, before walking into the theater but now I am curious.

Welcome to Marwen stars Steve Carell as Mark Hogancamp, a man who was the victim of a violent assault because he liked wearing women’s heels. Mark copes with the trauma of his attack by making up a fictional town called Marwen using dolls and models. This town is set in WWII, where a doll named Cap’n Hogie, modeled on Mark himself, lives with female dolls based on all the women in his life. Hogie is a soldier who fights Nazi dolls based on the men who attacked Mark.

The bulk of Welcome to Marwen is the back and forth between Mark’s time in the real world and the imaginary Marwen where he goes to cope with stresses in his life. This is where the movie’s main issues really begin. The film spends so much time in Marwen that we don’t develop a solid connection with Mark. The story tries to use certain dolls as an allegory for his pain and allude to things that simply never land because you’re sitting there watching this weird substory of Cap’n Hogie. It makes you wonder: Why should I care about Hogie or Mark?

Director Robert Zemeckis seems to be much more interested in the CG performance of the movie than the real world scenes, making it hard for the viewer to gain interest. Most of the performances by Janelle Monaé and Gwendoline Christie are as dolls, not their human counterparts, except for very short scenes. This makes you think there is more development that didn’t make the final cut and this hurts the story because some background would help to add context and understanding of Mark’s journey.

As such an experienced director, Zemeckis does a good job with the camera and effectively builds up certain emotions in the viewer at times. But because these scenes are so few and far between it feels like he’s trying to manipulate the viewer. He also puts in an Easter egg of his previous work that feels very forced. It’s an eye-roll worthy scene.

Welcome to Marwen wants to be so much more and Steve Carell gives a really good performance but the movie falls apart by not knowing itself or the source material. This is something I can tell even without seeing the documentary. It might’ve been more successful if Zemeckis had made an animated film of the imaginary world Mark, with the real world being a reveal at the end. It feels like that was what they really wanted to make in the first place.

In the End: Welcome to Marwen is a disjointed yet well-meaning movie, although you’d most likely be better served finding the original documentary.