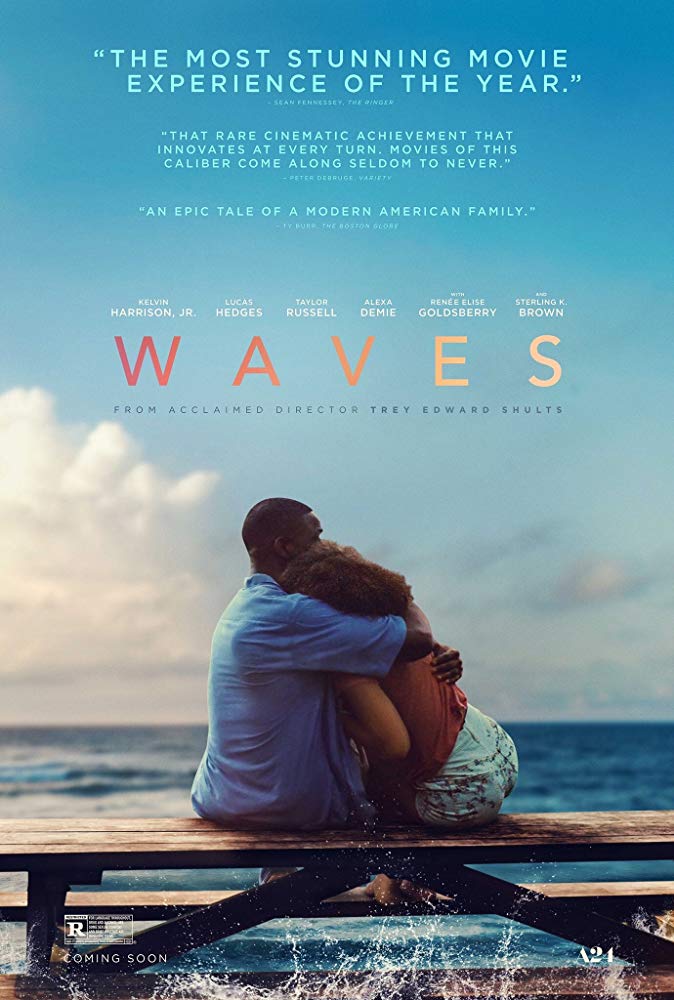 Basically: A somber family drama about the pressures of teenage life
in 2019.

This is a really serious film. It’s somber and heartbreaking yet inventive and touching. WAVES focuses on Tyler Williams (Kelvin Harrison Jr.), a high school senior on the wrestling team. He’s a star athlete and has to deal with a very demanding father, Ronald (Sterling K. Brown) who pushes his son to be better than everyone relentlessly, pressuring Ty physically and mentally. This pressure leads to Tyler partying too hard as a release. His only reprieves are his girlfriend Alexis (Alexa Demie) and his supportive younger sister Emily (Taylor Russell). But after Ty acquires an injury—that he doesn’t tell anyone about—his life starts to spiral out of control and he gets lost until something tragic happens. Writer/director Trey Edward Shults does some interesting stuff in capturing the lives of these young people in South Florida. He does it visually, by playing with the aspect ratio on the screen and his lenses, along with camera movement. In places, he and cinematographer Drew Daniels use what feels like a fisheye lens and rotate the camera around the interior of cars to show the freedom the kids feel when they’re in love and just driving—listening to music with no cares in the world. No school or parental pressures, just spending time together and living life. It does a great job along with the performances to capture that authentic feeling on screen.

Also, not enough can be said about the acting. Along with the actors I’ve already named, Renée Elise Goldsberry and Lucas Hedges round out the rest of the main cast with everyone working at a high level to pull you into this world and these characters. As Alexis, Demie puts herself on the map between this performance and her work in the HBO show Euphoria. Goldsberry plays Tyler and Emily’s mother, Catherine, and does some great work with both Harrison and Brown in the scenes they share. Never once do her emotions on the screen feel fake or even overdone. I hope folks notice her here for more film work, even though she already has great fame for her work on the stage especially in Hamilton. Another standout star of this film is the use of music by Trent Reznor and Atticus Ross who are becoming a force in terms of scoring and soundtracks for film and television. All their choices work, from the scoring they use to help build tension to the songs they use as musical cues. The way they work in current music, to give more storytelling to scenes or characters’ emotional states, hits well.

One thing that might not work for everyone is that the film can feel a bit long because the main character changes halfway through. If there is one main flaw it is that you feel that it’s too much like two films—one focusing on the son, then one on the daughter. The second hour is where Russell gets to shine as Emily becomes more clear as a character.

I loved this film but there were some at the screening who were bothered a bit. Not every adult there vibed with it, they couldn’t connect, but the high schoolers really resonated with the story. It’s something rare that someone makes something about teens that teens feel is hitting into their lifestyle.

In The End: WAVES is worth the experience and it’s worth taking a teen to see it. It has some difficult things going on but, in the end, it’s a fire piece of filmmaking.