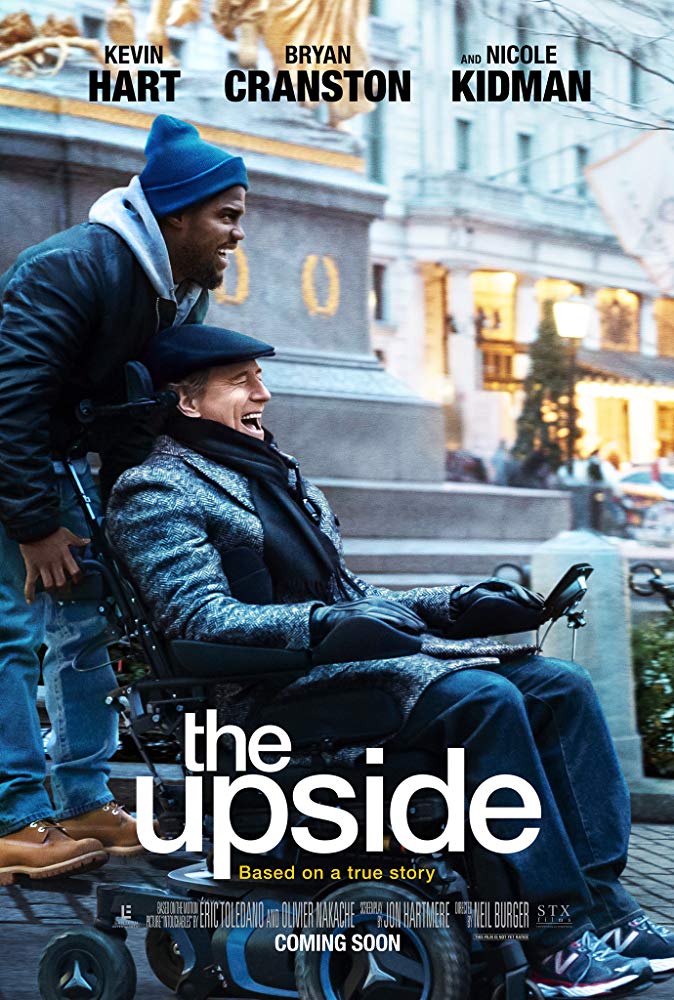 Basically: The American version of Intouchables or the movie with Kevin Hart and Walter White.

The Upside has a lot going against it—most of it not its fault. The first is it’s a remake of the 2011 French film Intouchables. Based on a true story, the original was well reviewed at the time and quite successful across the world. The Upside stars Kevin Hart, Bryan Cranston, and Nicole Kidman and is about Phillip LaCasse (Cranston) who is a quadriplegic and is looking for a new caretaker when he meets Dell (Hart). Hart is a parolee trying to get his life together after prison and needs a job per his parole requirements when he stumbles into an interview for this role. Phillip likes Dell because of his frankness while not belittling him. The bulk of the movie is about the burgeoning relationship between a man who basically doesn’t want to live anymore and another who shows him how special life is. All the performances are decent and it’s interesting to see a Hart performance not be completely silly. The laughs in The Upside come from a more authentic place.

The story, while it’s good, this American version makes some cultural changes that might not sit well with people. The current issues of Kevin Hart and the Oscars, and also Green Book might affect this movie. You might be sitting there and thinking, “I get Hart’s drama but what does Green Book has to do with this?” About halfway through the movie it hit me: Dell fixes Phillip’s life. He helps him find love again and to climb out of the darkness of his past to accept the present. Dell helps Phillip see the things he loves from a new perspective and see just how the other side lives. All of that sounds great but Phillip is white and Dell is black and for some this movie will just be another one where a black person essentially saves the white person’s soul. The white folks have so much and have all this knowledge and this black person knows more about what’s really needed. It’s a trope, one that people knew before trope websites existed. This trope, known as “magical negro” was explored and researched and this movie falls deeply into it. I find the movie very entertaining and it has some real heart but I can’t not make note of the problems.

Editor’s note: There is also the issue of an able bodied actor taking on the role of a disabled person thus shutting a disabled actor out of one of the few roles expressly written for them.

The Upside is a good movie. January is a time of the year when most of the movies released are throwaways (not counting award films getting wide releases). I hope people can take the time to see it and I hope this can lead Kevin Hart to take more roles that aren’t just silly little man child comedies, like he’s built his career off of.

In the End: The Upside is a solid buddy movie.