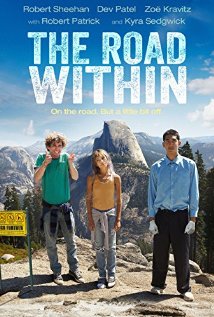 Three people with Tourette’s, OCD, and Anorexia steal a car and go on a road trip. No, this is not the latest rendition of the “three guys walk into a bar” joke; it’s the story of The Road Within, the latest cinematic offering starring Robert Sheehan, Dev Patel, and Zoe Kravitz.

Confession time: I saw Robert Sheehan in the trailer and I immediately wanted to see this movie. I am a huge fan of his, but I feel like the only thing that he’s really gotten to show his full range in was the UK television series Misfits. Pause for a second here, and if you haven’t seen Misfits, you need to. I binge watched the first few seasons in a matter of days because it’s pure brilliance.

OK, back to The Road Within. The movie hits theatres on April 14 but it’s available for viewing on iTunes now. Weird how that works, huh? Anyway, I consider myself lucky to have seen this movie before its theatrical release but I didn’t 100% looooooooove the movie. There’s something strange about the American roles that Sheehan plays that I just don’t gel with. I wanted him to break out in The Mortal Instruments: City of Bones but he just isn’t quite there yet, and unless you’re a Misfits nut like me, he is not a household name. I’m really waiting for the right script and director to come along and this guy is going to blow up. Also, his American accent shows so many signs of his Irish roots that I’d rather he just speak how he normally does.

But I digress, again. The Road Within walks a careful line of inside humor and “ha-ha there’s something wrong with you” style comedy, and it’s good. The pains that the characters, their families, and their doctors go through feel authentic and they take you out of your pity zone and let you laugh right along with the mentally diseased. The film offers a bit of hope that for the abnormal to feel normal, that they just need to be treated normally: the anorexic nibbles at a sandwich, the guy with OCD takes his latex gloves off for a few minutes), and the guy with Tourette’s stops screaming “ass licker cunt whore”for a little while. But things get stressful for the troupe and their terrible symptoms come right back (no spoiler there, you knew that was going to happen).