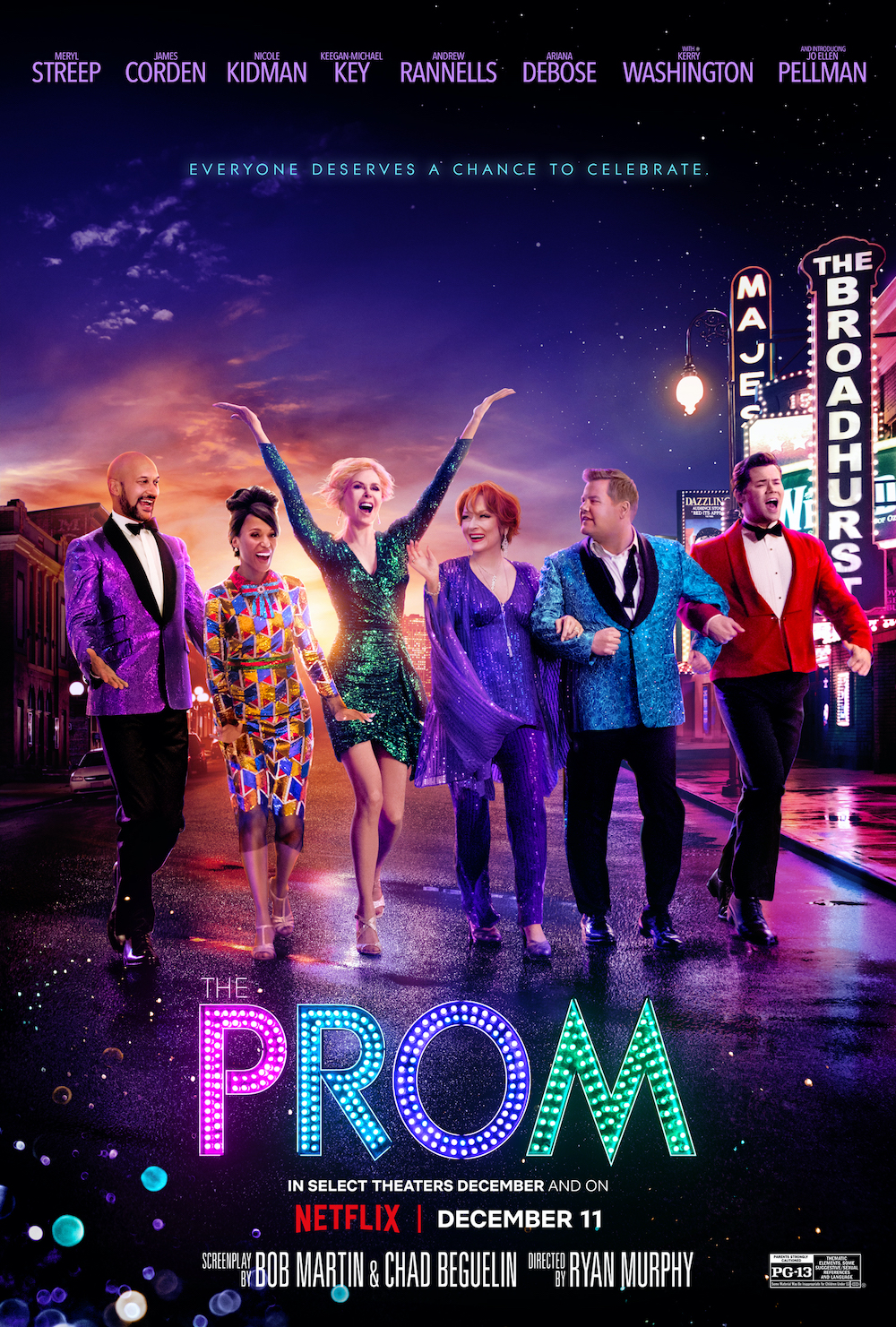 Basically: We love a good musical but we only liked The Prom.

Ryan Murphy comes home—in a way—with his adaptation of the Broadway musical The Prom. Out tomorrow in limited theatrical release before premiering on Netflix next Friday, The Prom is the story of two very different contingents finding their way to acceptance and grace.

In smalltown Indiana, Emma (Jo Ellen Pellman) pleads to be allowed to take her girlfriend to prom. The PTA, lead by the buttoned up to the point of strangulation Mrs. Greene (Kerry Washington), objects demonstratively. By demonstrative I mean, they cancel the whole thing. Talk about throwing a tantrum. Meanwhile, on The Great White Way (it’s funny cause it’s a pun). Where were we? Oh yes, Dee Dee Allen (Meryl Streep) and Barry Glickman (James Corden), a pair of formerly fabulous former Broadway darlings, are in a bad way. By in a bad way, I mean their show is about to close on opening night due to bad reviews. We’re talking victorious vitriol, y’all. Like when The New York Times writes, “the most insultingly misguided, offensive, and laughable performance that this reviewer has ever had the squirming misfortune to endure.” Pardon me while I giggle.

Dee Dee and Barry are joined in their misery by Trent (Andrew Rannells), a bartender who attended Julliard and who once starred on a hit sitcom. There’s also Angie (Nicole Kidman), a chorus girl who is rapidly approaching chorus ma’am. The four drink while they contemplate what to do to revive and/or jumpstart their careers. The drinking probably accounts for their decision. They figure activism is a pretty bauble. Oh, and there’s a queer young woman in a bind who they can exploit for press. Yay. Off to Indiana we go…on a bus…for a traveling tour of Godspell…eventually heading to Guantanamo. Wait, did I mention Trent went to Julliard? You should know Trent went to Julliard.

Back at High School USA, there are some juicy secrets to be discovered. Okay, okay, there’s only one juicy secret. Emma’s girlfriend is none other than [insert drum roll here] Alyssa Greene (Ariana DeBose) the daughter of the prissily perfect homophobic harridan Mrs. Greene. If only there were more “ooooh, girls” to be found. Well, there are a few. Meryl Streep is amazing again. By amazing again, I mean she’s so perpetually good it would only be surprising if she wasn’t—which would also be the apocalypse. Here she gives us Liza Minnelli glam, with a side of self-centered camp. We’re here for it.

Pellman and DeBose are endearing as our sapphic sophomores (okay, they’re probably not sophomores but I’m rolling with the alliteration). Both sing with a feeling and awakening that makes you hope for them, that they find their way to their truth.

And then there’s the surprise “oooh, girl” of Keegan-Michael Key. The comedian plays the straight man this time around (also a pun), delivering a heady and heartfelt performance as the school principal. Mr. Hawkins is a social justice warrior and queer ally who may be the only adult in the entire town of Wheredafuckarewe, IN.

NOTE: That’s probably not the name of the town but that’s how they played it, thusly we carry on.

The Prom is mostly an oh okay, girl experience. Imagine an episode of Glee with special guest stars and you’re there, smack dab in the middle of Wheredafuckarewe, IN, wondering why you’re only mildly amused. This much star power should erupt in fireworks but instead there are only flashes of light. It’s like you bought the generic brand of Broadway Musical at your local corner store (and it may or may not be expired, depending on your mood when you partake).

Riddle us this, why did we cast the lovely James Corden as a gay Broadway vet? We adore him but there are so many gay actors who scintillate with their singing and dancing. Did we need a straight man here? Were there not enough stars on the marquee already? One must question the casting, no? One must also wonder why not someone like Lea DeLaria? DeLaria is the same type as Corden, also a great singer, AND is an actual gay woman who would’ve added much more dimension to the part of mentoring Emma.

Kidman does a good job as a classic Bob Fosse dancer, right out of A Chorus Line, but the fact the character is so very Broadway without bringing anything to the story is part of the fizzle of The Prom. Also featuring in our “oh okay, girl” category is the music. The songs all sound like that one song you love from that hit Broadway musical. Everytime a song concluded I started singing that one song from that one hit Broadway musical. Everytime. Although, I will admit, Pellman and DeBose share a snappy, sweet duet; and a later moment when Emma reaches out to other queer kids via the internet really landed.

When I calculate the balance of “ooooh, girls” verus “oh okay, girls”, The Prom rates as an afternoon entertainment, a timepass but not much more.

And if I may, here’s my request: Please give us more movies where queer kids get to just be queer in stories that aren’t about their struggles—that would actually be a reason to dance.

In the End: It’s Glee: The Prom Edition – Now with superstars!

The Prom is in theaters tomorrow
and on Netflix on Friday December 11th.