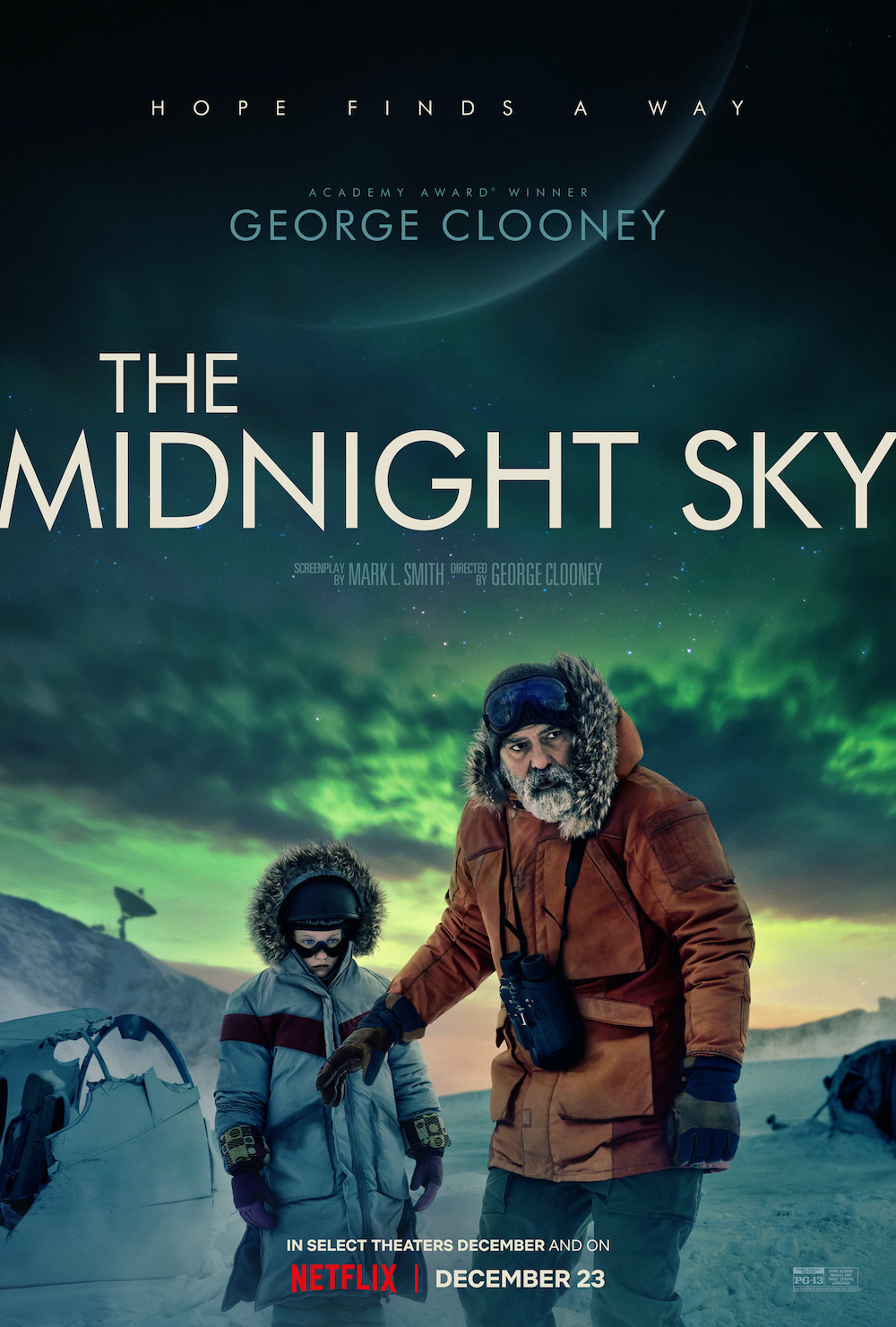 Basically: Deep space x the apocalypse—exactly as we’ve seen them before.

After one of the 12 filmic apocalypses poisons the earth’s air, a lone scientist tries to warn a spaceship returning from exploring a planet that was meant to be our salvation, but communications are failing and the disaster is spreading.

Starring and directed by George Clooney and adapted by Mark L. Smith from the novel Good Morning, Midnight by Lily Brooks-Dalton, The Midnight Sky is meditative apocalyptic science fiction with a very slow burn. Utilizing memory, dream, and two stories of mutual need, the film explores human connection and what family means in the face of eradication.

On earth we meet a terminal man, Augustine (Clooney), who chooses to stay behind during an evacuation from a research facility. A woman in the long line to the helicopters screams, she’s lost her daughter but she is assured the child has gone on ahead. Left alone, Augustine sets a reminder to contact the Aether, a spaceship that was sent to the planet K-23 as a scout for all of humanity. We shift to the Aether and meet her crew. Sully (Felicity Jones) is our POV character and also the communications officer; so that works out. The rest of the crew are traditional sci-fi archetypes—lovable but meant to serve a purpose. There’s the commander who is a winking know-it-all smartass (David Oyelowo), the adorable young genius engineer (Tiffany Boone), the stoic family man pilot (Kyle Chandler), and the caretaker astrodynamicist (Demián Bichir). They’re standard but useful parts of the storytelling toolkit.

At the research facility, Augustine finds a little girl in a pretty yellow dress (Caoilinn Springall). The two of them are all that’s left behind and they’re headed for a perilous journey.

When communications with earth dropout completely, the Aether crew begins to suspect something is very wrong. Augustine’s ability to connect with them via a powerful satellite antennae may be their only hope. But both storylines feature quests that are full of danger and self-reflection is not their friend. They do it anyway. The Midnight Sky goes down like a cocktail of Arrival (2016) and Frequency (2000) but it lacks the emotional potency of either. Both those films explore the same thematic territory with a deftness. The connectivity of past and present, the indomitability of the human spirit, the transformative impact of loss—Arrival and Frequency thrive within the same themes that The Midnight Sky squanders.

It’s all connected (but do we care?).

The mystery of the story is unlocked within the first ten minutes. Afterwards you’ll wonder what you’re meant to care about as the characters travel the vastness of space or an equally vast arctic tundra. The film is shot well and finely acted, but its story is average with a denouement that’s a dud—which makes it cinematically pretty but pointless.

“Pretty but pointless.” That’s it, that’s the review.

In the End: This one goes on my Insomnia Playlist.

Stream The Midnight Sky on Dec 23 on Netflix.