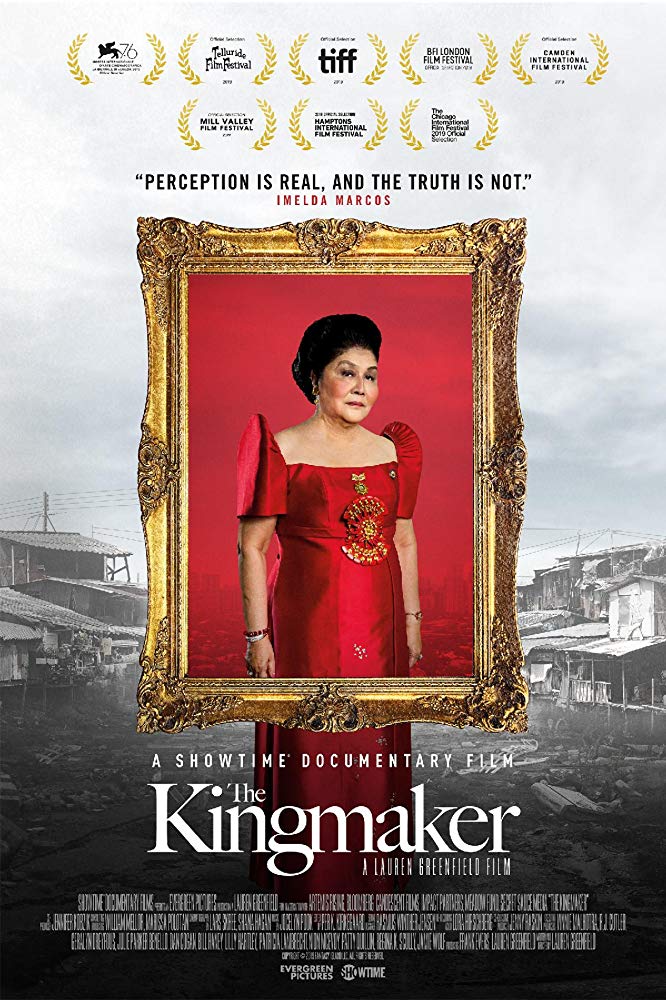 Basically: A portrait of 20th century Lady Macbeth for our modern political times.

“Perception is real and the truth is not” is the tagline for the narratively rich Showtime documentary The Kingmaker. The film is about the rise, fall, and return (but not redemption) of Imelda Marcos. Director Lauren Greenfield takes the viewer behind the closet of over three thousand beautiful shoes to expose an even greater abuse of power and wealth that is drawn from it.

Imelda Marcos starts as a somewhat sympathetic figure. “Sometimes it helps that you are not taken too seriously” is a phrase that can speak to any woman who has been underestimated. Deeply affected by the death of her mother when she was a child, she aspired to rise from her humble but politically connected beginnings. Using the beauty pageant circuit as a way out, she eventually became Ms. Manilla and landed the golden ticket, which is when she met her future husband Ferdinand Marcos. She fondly recalls their eleven-day courtship, which culminated in a marriage that would cement both of their political destinies and their country,
the Philippines. It is no secret to anyone that Imelda is a naturally gifted politician with the ambition to propel herself and her family to the top. She recounts her responsibilities as a first wife such as engaging in soft diplomacy meetings with world leaders like Mao Zedong, Muammar Gaddafi, and Richard Nixon. Even her son Ferdinand Jr., nicknamed Bongbong, proudly proclaims his mother is the best politician he has ever seen. The documentary paints a compelling portrait of a woman who has shrewdly reinvented herself as the selfless mother of her nation, one who literally gives money away to the poor women and children she meets on the streets and to patients on cancer wards. Where all of her wealth has come from and the machinations it took to claim it is another darker narrative.

In The Kingmaker the most damning accounts against Marcos’ retelling of history—particularly during the time of Martial Law from September 1972 until Ferdinand was exiled in February 1986—came from journalists and activists like May Rodriguez. Those opposed to the government were targeted and even tortured. The former head of the commission on Philippine elections Andy Bautista’s efforts to recoup government money that funded the Marcos’ lavish lifestyle has even been an uphill battle. Perhaps the most fitting illustration of both the excess and the moral corruption of Marcos’ ambition is Calauit Island. Over one hundred animals, including giraffes and zebras, were transferred from Africa to a remote island off the northwestern part of Palawan (which displaced 258 families in the process). Despite being labeled as an animal sanctuary since the 1970’s, the animals have not been under the best care. The effects of inbreeding has caused health problems, while money for the program has been steadily declining. Even when the families were able to move back, the indigenous population and open zoo have lived in a precarious balance.

After the film’s screening in DC there was a talk between Greenfield and former US Ambassador and National Security Advisor Susan Rice. Greenfield has previously covered the trappings of the relentless pursuit of empty wealth in The Queen of Versailles and Generation Wealth. When talking about the evolution of The Kingmaker, the director was originally inspired by an article about the animals of Calauit Island. She served it onscreen as a parable of Marcos’ rule in the Philippines. On the surface, a veneer of benevolence covered up the corruption that would eventually (and literally, in the case of the zoo’s animals) destroy the beings they promised to save.

What Greenfield realized during the filming was an even more prescient story of Bongbong Marcos’ rise to power. When Rice was asked how the rise of nationalism and “the strong man” as society’s savior is being echoed all over the world, she was careful for the audience to keep in mind that not every country can be compared equally. Each one is different in regards to their culture and history and what ultimately can be done to fight it.

The Kingmaker serves as a warning for how fragile democracy can be in the face of a leader’s reckless pursuit of power and wealth. It details the generational damage of the Marcos family’s unchecked power that was inflicted on the people who fervently believed in these strong men (and women) to be their saviors.

In the End: What starts as a typical rise to power parable of Imelda Marcos and her ambition and greed evolves into a political thriller/comeback story of one of the Philippines’ infamous
political dynasties.