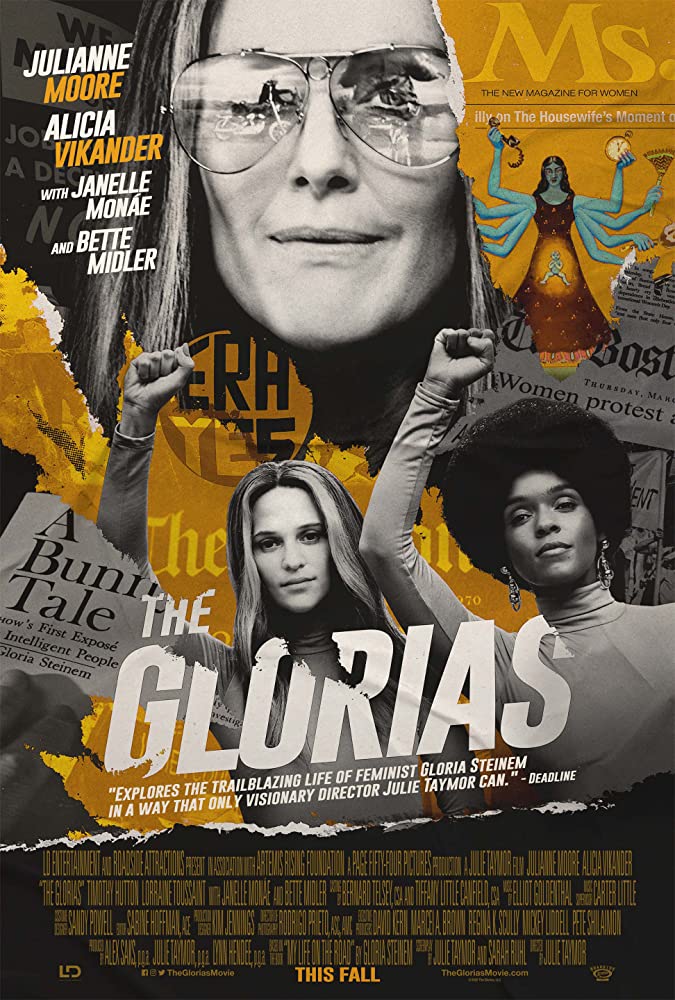 Basically: The life & times of Gloria Steinem and her fight for women’s rights.

Gloria Steinem, a women’s rights champion, didn’t just emerge like Athena from her father’s brow… No, she had to evolve into who she is. The Glorias attempts to show us that evolution. From her early days, living with a father who’s a hustler with wanderlust and a mother with mental illness, through her time as an undercover reporter posing as a Playboy Bunny. All the while putting up with the journalism boy’s club (which it still is). We follow her until she finds her place in the women’s movement and helps create Ms. magazine.

This movie was cast to perfection with Alicia Vikander and Julianne Moore as younger and older Gloria respectively; Janelle Monáe as Dorothy Pitman Hughes and, hell, even Bette Midler has a role. It is like the who’s who of awesome
female actors. Sadly, director Julie Taymor is way too indulgent with this movie. The Glorias drags and misses the mark with scene after scene. It is half an hour too long—I know because I skimmed the last 30 minutes. It seemed like Taymor didn’t get the memo about finding an ending and sticking to it. Gloria founds Ms. magazine—it’s a success—the end. But no, not for this director. The ends kept coming. The Glorias was such a forgettable film that I nearly forgot to write the review.

I loved seeing the REAL Gloria Steinem at the end of the movie but it took too long to get there. There were too many scenes that seemed important at the time but didn’t pay off. For instance, Janelle Monáe, holding an infant, tells Gloria she needs some time off—and then she just disappears from the movie, replaced by Bette Midler?? While I understand this is a biopic and not everything will be tied up with a bow, I would love to see some completion to these subplots. The final scene in the film was delightful, though: Gloria, in all her iterations (child, pre-teen, young, middle aged) are speaking to one another and, as the camera pulls back, we are on a bus full of women—ranging from very young to very old (including Julie Taymor and the real Gloria Steinem). They’re all going to the Women’s March, not only that, we get to see Gloria speaking there. It was a lovely vision and a fantastic conclusion to the movie—I just wish it had been 30 minutes shorter. Argh, Gloria Steinem deserves to be celebrated but perhaps not so drawn out?

In the End: Watch it in the background while you fold laundry or change the oil in your car, be happy Gloria got a movie, but don’t plan to watch it again.

THE GLORIAS is available for purchase on Digital
and Streaming exclusively on Prime Video starting September 30th.