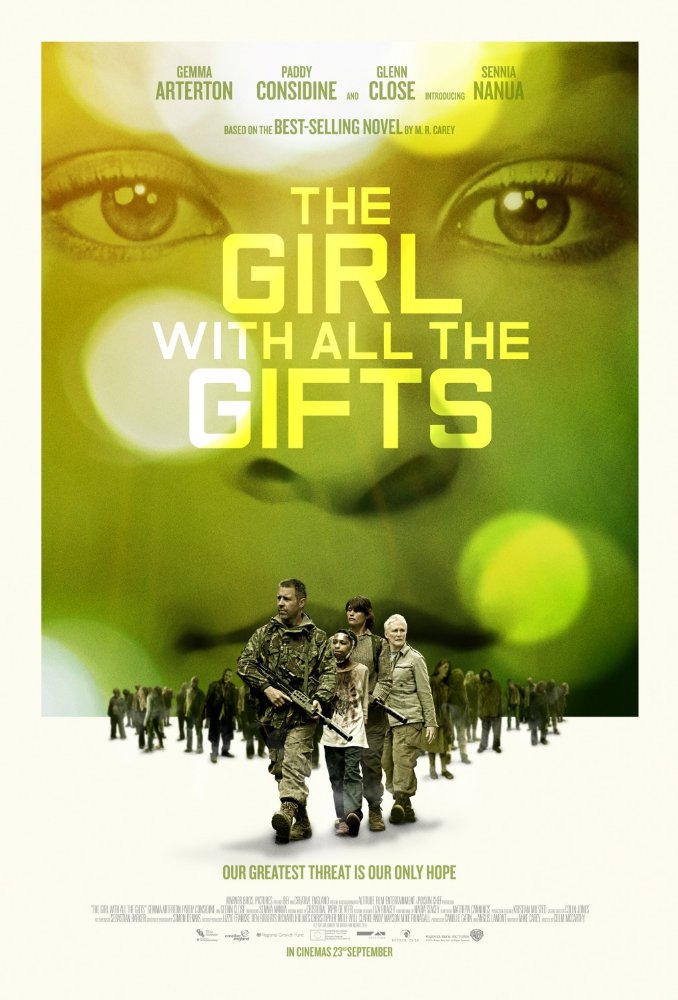 The Girl with All the Gifts

Basically: A great twist on the zombie genre with strong, well developed female characters—and in this one the kids rule!

GWATG gives us a new twist on the zombie genre with a more scientific look at the cause of the outbreak and its unusual side effect. In this story a fungus has caused a widespread outbreak of “hungries”, causing the survivors to live in a heavily fortified military complex. Within the walls of the complex a group of special students are housed in prison-like conditions where they are both studied and educated. These students could hold the key to survival, but before medical studies can be completed, the complex is overrun by the hungries; forcing one student, her teacher, and several military personnel into a fight for their lives and the future of humankind. I really liked the movie rendition, it truly brought the pictures and characters I had in my head when I read the book to life. Visually the movie is beautifully shot and the characters, especially those of the main characters Melanie and Miss Justineau, are well developed and believable.

Miss Justineau, the teacher in the military complex, forms a special bond with one of her unusual students that puts them both in danger. Helen Justineau is protective of Melanie, the central character and a student who displays an unexpected pleasantness despite her hostile environment. This bond causes Justineau to be at odds with her cohorts and puts her life at risk. The tables quickly turn when their compound is overrun and Melanie becomes the protector; proving that while different, she is capable of both love and kindness. Sennia Nanua, who portrays Melanie, does an exceptional job of bringing out the innocence juxtaposed with the intelligence and cunning of something more than an ordinary child, while coming to terms with who she really is. Miss Justineau, played by Gemma Arterton, conjures up all the maternal feelings and strength of both a parent and a teacher without becoming sappy. The twist ending, which came across stronger for me in the movie than the book, is brilliant and a great commentary on how we see ourselves and those who are “different” than us.

I want to preface this next part by saying I read the book first—but I’m not going to be cliché and say the book was better. However, I did feel the movie skipped over some details and characters’ backstories that really added to the narrative and serve to further engage the reader. In particular Miss Justineau’s backstory, which is left out of the film, adds to the understanding of her motivations throughout. Viewers who read the book will enjoy seeing this story brought to life, while those not familiar with the source material may be left with some questions, but will enjoy the ride nonetheless. I loved this smart and unexpected take on zombie films. The deeper questions of how we see ourselves as entitled to domain over both the planet and others not like us was thought-provoking and timely. While an exciting break from reality, GWATG also leaves you with something to think about when returning to the real world.

In the end: This indie film far surpasses a lot of what’s out there in the over saturated dystopian/zombie film world. It’s available to rent on Amazon and Xbox so it’s a great way to spend a snow day without having to leave the house.