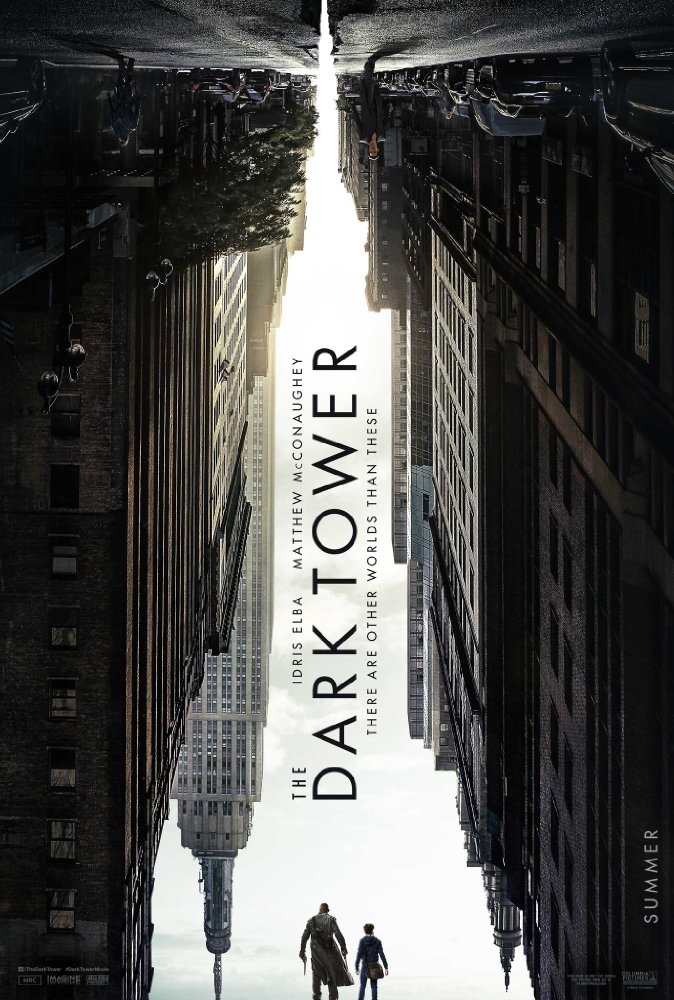 Basically: If you like the books, you MIGHT see a thing or two that will remind you of them…maybe.

Jake Chambers (Tom Taylor) has nightmares. He dreams of a fantastic tower, a wizard clad in black who wants to tear it down, and a grim gunslinger who has given his life to defending it. Everybody thinks he’s crazy. But when they come to take him to a clinic for special help, Jake realizes that his nightmares are true. Now he must find the gunslinger and save the tower; if he wants to survive. Passing through an impossible portal to another, barren world, Jake teams up with Roland  (Idris Elba), the last gunslinger, to find and stop the Man in Black (Matthew McConaughey) before he can use innocence itself to destroy the Dark Tower, plunging all the worlds into eternal chaos.

Based on a seven book series by Stephen King, the movie settles for cribbing a few plot points, reframing Jake as the lead instead of Roland, and pushing through a number of set-pieces on its way to a predictable conclusion. This is a shame. The books establish a deep mythology, tying together worlds of past, present and future; smashing King’s many books into one meta-narrative of sacrifice, determination, the turning of the wheel, and the power of the family one chooses against fate itself. The movie uses none of this, really. It settles for the lowest common denominator, a version of the tale that would scarcely satisfy SparkNotes.

The fault does not lie in the actors. Taylor gives a strong performance as Jake, a kid lost in his own nightmares and desperate to find something to cling to, while Elba is stoic and steady as Roland; it is perhaps the great tragedy that this part should have put Elba into the top tier of actors, but is likely going to fall short. And McConaughey is as good as ever, but the script gives him no real motives for the Man in Black, apart from simply being evil for evil’s sake.

In the end: Whether this is meant to open a franchise or not, it is likely to kill attempts to bring THE DARK TOWER to a receptive audience for several years to come. And that’s a grand shame, because it deserves better.