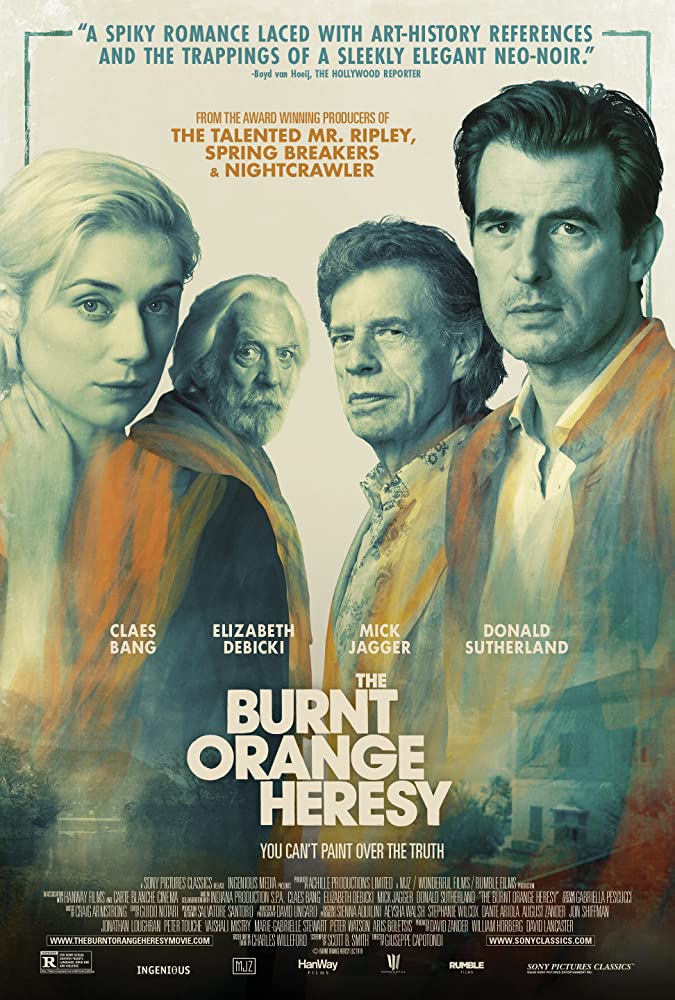 What is the definition of Irony? A critic writing about a critic in a movie about a critic? Maybe it’s more meta than anything else. Imagine a sharp sarcasm laden romance with pompous art-history references, nefarious intentions, and loads of sexual tension. You’re charmed—in the beginning—by a tone similar to the seminal Hepburn and Peck classic Roman Holiday. Welcome to Giuseppe Capotondi‘s adaptation of Charles Willeford‘s 1971 novel, The Burnt Orange Heresy.

Enter art critic and fraudster: James Figueras (Claes Bang). A brilliant charlatan, living in Italy feeding the masses the art pablum that makes ends meet. His routine is changed with the unexpected entrance of American expat Berenice Hollis (Elizabeth Debicki). A woman with a wit as sharp as a pallet knife. The couple manages to ruin a perfectly fine one-night stand with a weekend fling involving a visit to wealthy art collector and skeevy gentleman Joseph Cassidy (Mick Jagger). Let me first say, I am probably the worst person to review this movie. I am just as jaded and cynical as the main character—minus the checkered history and a beautiful woman who humors my sarcasm and pompous ramblings. (Although I have my editor for that bit.) So, when this story started, I was lulled into a false sense of superiority over what feels like a common motif of star-crossed lovers versus art against Italy’s beautiful vista (technically Lake Cuomo in Lombardy, Italy). Not fully aware of Giuseppe Capotondi’s films, I did not know this setup was his trap. Cassidy wants Figueras to interview the famous J.D. Salinger-esque hermit artist Jerome Debney (Donald Sutherland). Cassidy tasks Figueras to use the interview as a pretext to “acquire”
a painting from Debney—something our intrepid art critic is forced to do thanks
to blackmailing and two of the seven deadly sins, greed and pride. Very bad
things ensue.

Giuseppe Capotondi creates a sublime neo-noir movie that indicts an art world full of bluster, floof, and a pompous search for meaning in everything where none is needed—as is stated in Debney’s description of the titular painting of our story. We get to see Figueras’s character deconstructed from a charming art-maverick into a broken and insignificant figure with more flaws than cubic zirconia. All of which is highlighted the more time he spends with the aloof and secretive Hollis. In the pure noir form, the protagonist is at the crossroads of his life of failure. On one side, James Cassidy and his all too familiar “demon” Figueras, have been married all his adult life. On the other hand, Berenice plays the stout but disenchanted knight looking for something…hoping sadly it is in James. Hollis is a reminder that he once believed in honor and authenticity—the less profitable option.

The most joyful moments come from Donald Sutherland, who reminds us why we love him. His delivery is both charming and enigmatic. Each exchange full of small strokes of metaphors that make James Debney fun, flawed, and incredibly frustrating. His conversations warn of a dark ending that you are never sure of but obviously is a warning to all involved.

Debicki and Bang deliver solid performances that slowly develop into genuine affection. At the same time, the chemistry feels forced at first, as most first contact tends to be. Yet the couple’s repertoire grows with every exchange and with a start like, “So you are one of those…a liar,” I should have known better. The evolution of their nascent romance is both helped and complicated by the machination of James Cassidy. Jagger’s performance, while not breakout, accomplishes the “creepy rich guy with a punch-able face” oeuvre I enjoy seeing. His plastic smile as he orders Figuera to commit sins is both convincing and quite repulsive. You know he probably smells like garbage pail polyester and wet Salem menthol cigarettes. The screenplay oozes charm and intelligence in a sleek neo-noir world of art, money, and masquerades. However, as the story descends toward its foreshadowed climax, it feels clumsy and forced.

One of the work’s main themes is the masks we wear. Everyone has two faces, the one they show and the one that comes out at night—and those masks complicate things. However, it is difficult to be shocked by the transformations when you are not invested in the characters. This clumsiness in development is heightened as the two protagonists begin to make contrasting illogical and ludicrous decisions. Even with the above-average performances, it does not seem The Burnt Orange Heresy was written for Bang and Debicki. Except for Sutherland. I constantly kept reminding myself that these ARE characters in the story. The lead roles, at times, felt passive. They came off more as a vehicle for things to happen than actively being a part of the story. With a tale this psychologically complicated that is a major letdown.

In the End: The Burnt Orange Heresy is a beautifully made film. Despite its stumbles, it still provides a charismatic adventure. However, parts of it leave you wanting more—but not in a good way.