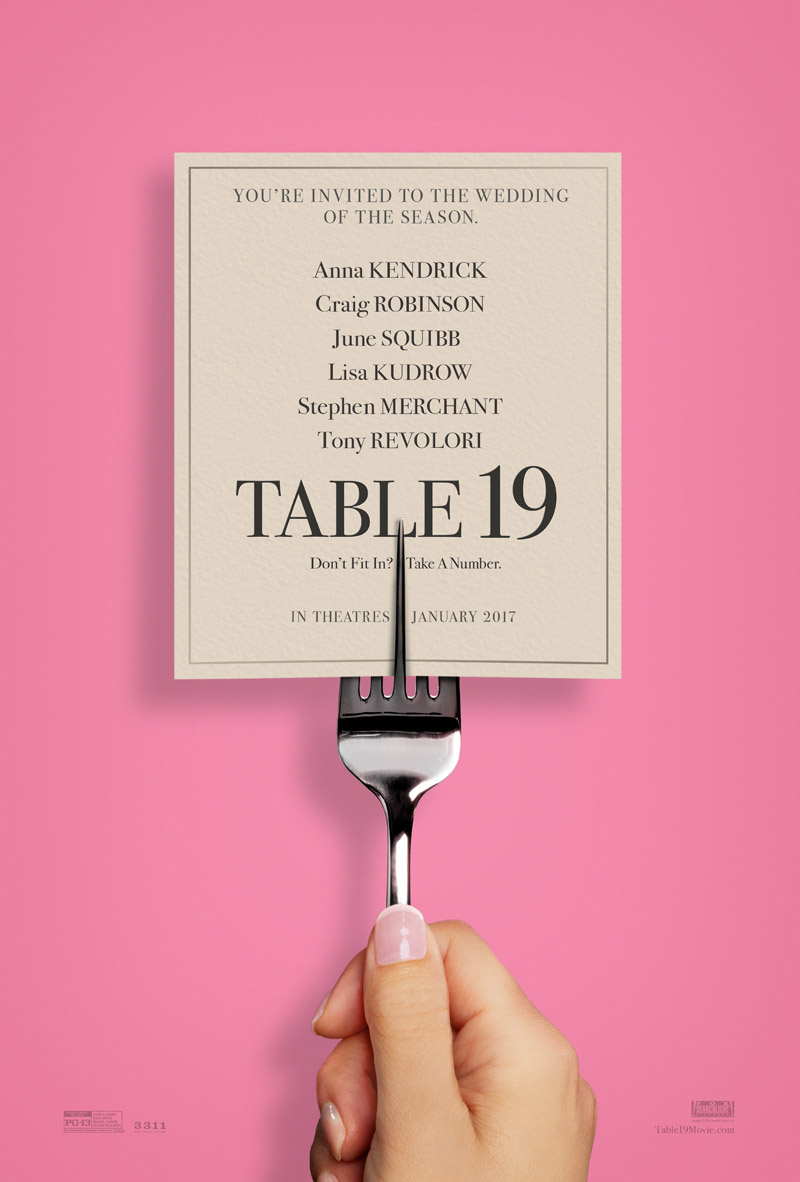 Basically: A group of misfits are exiled to the far reaches of a wedding reception—hijinks ensue.

Wherever you are, whoever you’re with, turn to the person next to you and ask them: Have you ever felt like a misfit? The answer is likely yes. No matter what we’ve accomplished, we can each point to a time in our lives when we felt like outsiders. This is the universal experience that makes stories like Table 19 work.

Anna Kendrick is Eloise. Eloise has definitely decided to attend the wedding of her “oldest friend,” who is also the sister of the guy who dumped her two months ago—in a text message. Does former maid of honor look good on a resume? I’m asking for Eloise. Joining her at the wedding reception are Jerry and Bina Kepp (Craig Robinson, Lisa Kudrow), a pair of lovebirds who often flip each other the bird. There’s Nanny Jo (June Squibb) who needs to be remembered and maybe to smoke a bole in the bathroom. Renzo (Tony Revolori) is the awkward high school kid, with the hilariously inappropriate mom, and the FUR bowtie. It’s so fluffy. The topper on the cake is Cousin Walter (Stephen Merchant) who smiles blankly, mainlines champagne, and reminds everyone he’s…“free”.

Without a doubt, Table 19 is the live action version of The Island of Misfit Toys. This is “the table that should have known to send regrets, but not before sending something nice off the registry. The table that could disappear in the middle of the wedding and no one would notice.” Well, of course, they disappear in the middle of the reception and go on an adventure. There’s a lot of self-discovering to do, and bunch of love to fall into.

I’ll admit, it sounds a bit clichéd. It’s not. Instead this is a poignant, funny movie that constantly plays with our expectations by surprising us. The hero is not the hero…or maybe he is. The sweet old nanny is hiding something. The 80s cover band is good. There isn’t a moment when you’ll want it to be over. Instead, you get caught up in the journey of discovery. The characters become social detectives in each other’s lives. They figure out what’s wrong and band together to fix it. It’s all very sweet…and awkward…which is lovely.

Two drawbacks: 1. Robinson and Kudrow are low on chemistry. 2. The movie is like popcorn, it’s fun while you’re eating it but it doesn’t stick with you. However, the writing and laughs balance the drawbacks out and you’ll walk out of the theater with a smile.

In the end: It’s a sweet, funny, smartly written although unaffecting movie—sometimes that’s all you need. Grab a seat at Table 19.