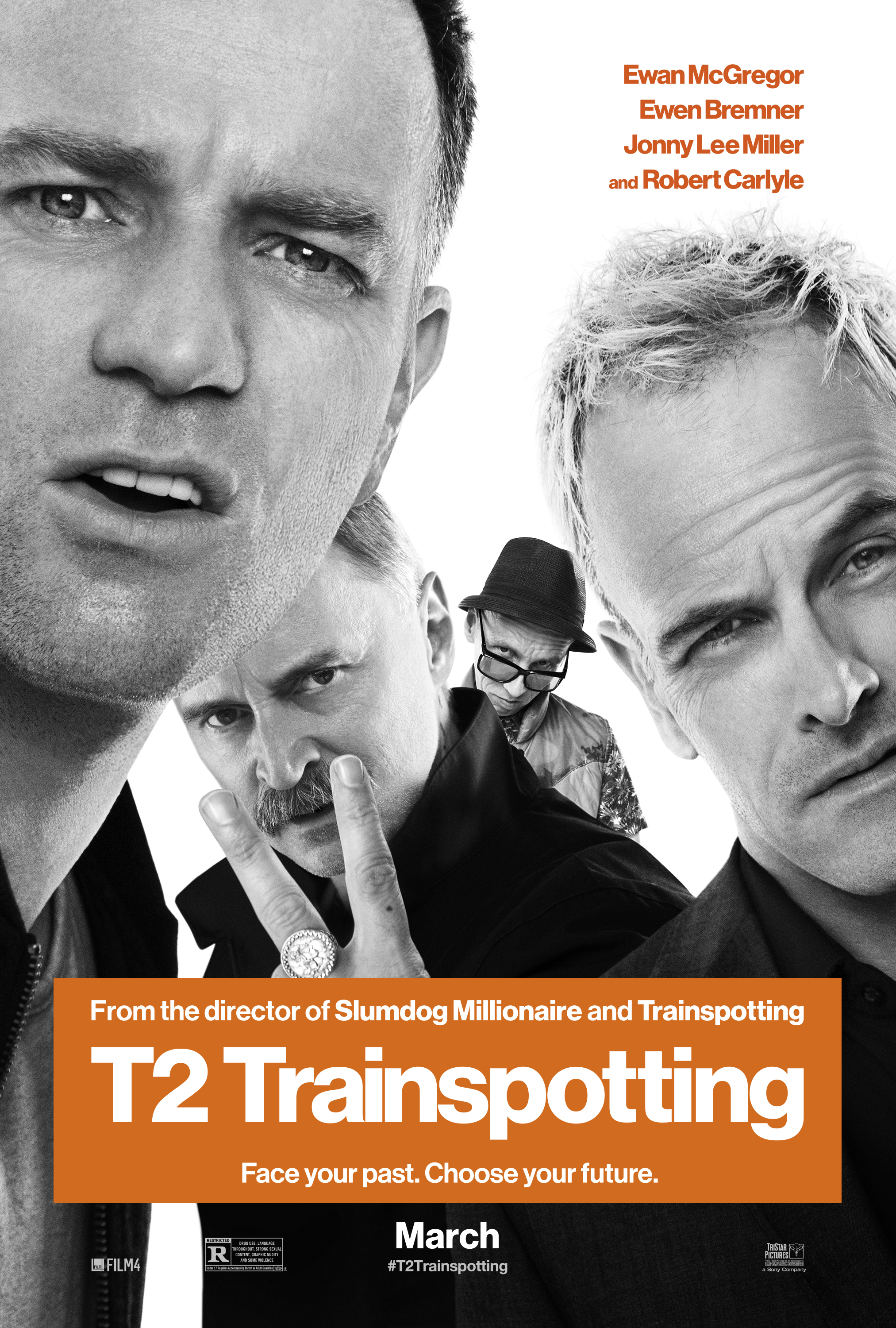 Basically: You’re still high, but don’t go home yet, because these four screw-ups will make you do the timewarp again.

Among the ways you can score how much a movie affects you, is if you listen to the soundtrack after you watch it. You can relive your favorite scene until the song becomes a part of your memory, your own experience. Time bends into a loop and we can indulge our nostalgia either through music, drugs, or with other people. Reliving time and coming to terms with its passing is how we find our four, not so young, punks from Trainspotting—maturing not very well into middle aged men.

Renton (Ewan McGregor) has chosen life. Instead of running away from the police we see him running on a treadmill; like another enfant terrible, Alex, from A Clockwork Orange, it seems Renton has aged out of his criminal impulses. The other three unfortunately have not put the past behind as easily. Sick Boy (Jonny Lee Miller) is now Simon and is tending to his parent’s run down bar—with sex extortion racket on the side. Spud (Ewen Bremner) is still on and off drugs. Begbie (Robert Carlyle) is behind bars. They are each where we expect them to be yet, like an old friend you haven’t seen in years, there’s the initial shock of how the years have worn into their faces and bodies, no matter how successful they are.

When Renton returns to Scotland and reunites with his mates one-by-one, each scene is at turns both violent and humorous. He has, after all, hurt all of them by running off with the money they stole. Even Spud blames Renton for actually giving him his share of the cash. What does a junkie spend money on? Can everyone get past their feelings of betrayal towards Renton? The line, “First there is an opportunity, then there is a betrayal” may hold the answer.

All the women from the first movie return. Unfortunately they are less prominent in the sequel. Though the female characters are more grounded in the present they are like fleeting apparitions compared to the protagonists. They are mothers, spouses, and unrequited loves who portray regret and disappoint for these men, who haven’t been more present in their lives.

The one female character with a featured role is newcomer Veronika (Anjela Nedyalkova). When we first meet her, Simon is her pimp/boyfriend; however as the movie progresses she becomes a catalyst for action. She schemes with and against the guys, taking advantage of shifting alliances and opportunities.

T2 Trainspotting is not the cinematic tour de force its predecessor was. However, we do see how Danny Boyle has grown as a filmmaker in his technical style with such an eclectic film biography as Steve Jobs, 28 Days Later, and Slumdog Millionaire. Boyle plays with time and memory and manages to capture the bittersweet longing and joy in reliving them as if through a mirage; the layering of an infamous scene from the original, when Renton gets hit by a car while Spud is frozen standing on the same corner in the present day. Also moments like a fever dream when Renton and Simon revisit old habits. “You’re a tourist in your own memories,” is an emotional jab Simon throws at Renton. Even as the audience is indulges in their time loop we may be more happier to see these characters than they are to see each other.

I may be giving the impression I didn’t enjoy this movie. I really did! There is a hilarious bit in the pub where Renton and Simon are able to take advantage of men who are also trying to relive past glories, while uproariously singing about a battle from 1690.

What the movie does well and rather movingly is show the audience that there are parts of us that cannot escape our past, and when we are forced to come to terms with it we do not always learn from our mistakes. Half of them are able to reconcile and move forward while the other half are doing the timewarp again, although with a little less spring in their step.

In the end: Like diving back into the mosh pit at your favorite band’s reunion concert. A punch to the gut of nostalgia, T2 proves that you can never outgrow that lust for life!