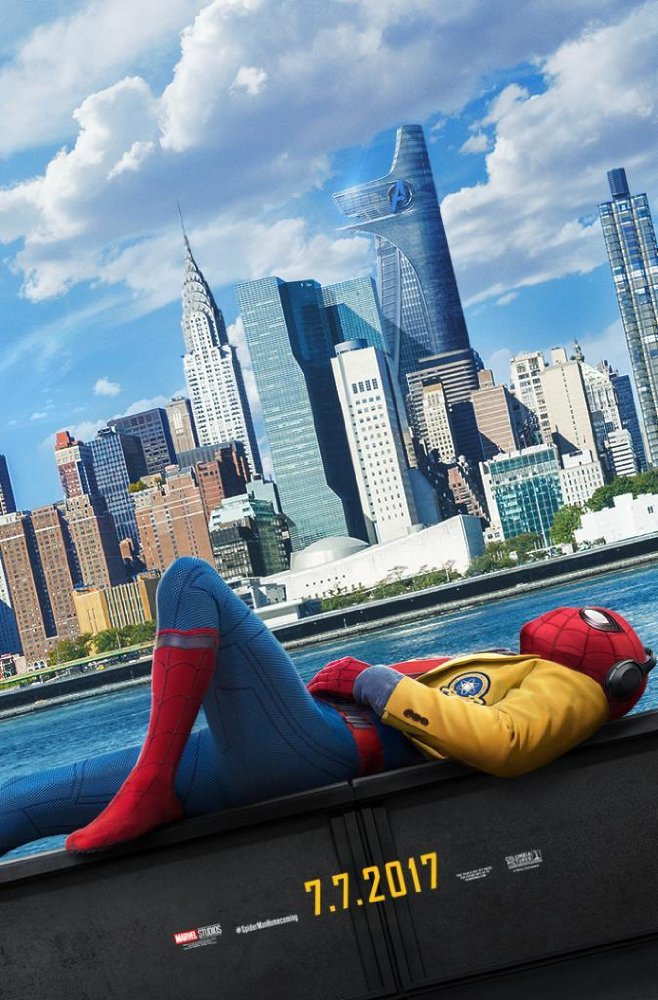 Basically: This is the best SPIDER-MAN we’ve seen, both actor and story.

Fan anticipation has built to a peak and the word is now out. SPIDER-MAN: HOMECOMING is a hit.

Following up on a smash appearance in CAPTAIN AMERICA: CIVIL WAR, Tom Holland now takes Peter Parker back to Queens, back to the grounded life of a high school student with a fantastic secret, and back to… waiting for the phone to ring.

Before we get to that, however, we roll back the clock to just after the Battle of New York. Adrian Toomes (Michael Keaton) and his crew are salvaging the alien tech left behind by the Chitauri when they’re told to stop work; a new organization is taking over. Bitter and angry, Toomes and his men realize that they’re sitting on a truckload of Chitauri tech. What might they do with it?

Two months later, Peter still hasn’t gotten the call. He feels forgotten. But when four guys pull an ATM heist using weirdly powerful weaponry, Spider-Man is there to stop them…until things go wrong and they escape. Peter can’t allow this destructive new tech to overrun the streets of New York, but neither Stark nor Happy will take his calls… Well, a spider’s gotta do what a spider’s gotta do.

Okay, so you’re probably wondering how SPIDER-MAN: HOMECOMING stacks up to the previous two rounds of films. First impression is that this easily reaches the level of SPIDER-MAN 2, widely considered the best (so far) of the Spider-Man movies. Holland has the right blend of easy charm, uneasy teen anxiety, and all the wonders, exhilaration and terror of being both Spider-Man and Peter Parker. Like the best of these movies, the focus is on Peter; Spider-Man is just what Peter puts on to do a job, whether that’s stopping a bicycle thief or saving his classmate… (yeah, no spoilers). Tom Holland absolutely nails the role, in ways that Tobey Maguire and Andrew Garfield never quite managed. IMHO, he’s the best we’ve seen in this role yet.

Keaton rarely has the chance to play the villain, but his Adrian Toomes is note perfect. Even though he’s a hard guy who makes some debatable choices, he wants what’s best for his family and his men. He also has an incredible speech for Peter, questioning whether he and Tony Stark are so different? Keaton’s character defies easy categorization and veers from being predictable more than once, which makes him a fascinating opponent for Peter, and a dangerous one too.

Robert Downey Jr. deserves serious praise for his work here. Tony Stark started off recruiting Spider-Man to help with taking down Cap. He admits that this was an impulsive decision that might not have been best for Peter. Stark is a distant and remote mentor whom Peter comes to see as a surrogate father. The two have a complex relationship and Downey shows a new side of Tony Stark: The man who wants to do better but isn’t sure how. It’s a great performance.

Laura Harrier, as popular girl Liz, is both smart and beautiful, giving Peter more than one chance to be part of her world. She makes it easy to see why Peter is smitten with her, showing emotional depths in fleeting moments on screen. (And if you don’t think that’s an acting challenge… it is.)

Similarly, Zendaya makes the most of snarky contrarian Michelle, who’s also bright and beautiful but tends to hide behind sarcasm and being a rebel. Fans will want to listen to the last decathlon team meeting to hear a major reveal, with big implications for this character going forward.

Side note: It’s really notable that the two girls who stand out most in Peter’s high school world are extremely smart and not in the slightest coasting on their beauty. The diversity of the student body is also striking for how well it reflects real life in 2017. Perhaps what’s most amazing is that this is just how things are.

This story plays as the second half of an origin story. Peter already had the powers and has experienced the gosh-wow of discovering them, and now he’s figuring out who Spider-Man is and what he wants to do. We don’t hear the familiar refrain “With great power…” or see Uncle Ben’s untimely death, but both echo through Holland’s performance, as well as short moments with Marisa Tomei as Aunt May. Although he starts out as a kid playing at being Spider-Man, he grows up an awful lot in this movie.

Sharp-eyed fans will note how many minor Spider-Man villains are part of the story, with Easter eggs and unexpected cameos abounding. While some might think this is oversaturation on the part of the Marvel Cinematic Universe, my take is this is grounding Spider-Man in the MCU world. It’s necessary, to make that transition from stand-alone movies to being part of a bigger universe. Now that this groundwork has been done, future installments can focus on expanding Peter’s world as the friendly, neighborhood Spider-Man…after he helps save the universe in AVENGERS: INFINITY WAR, that is.

Stay for the mid-credits and post-credits scenes. Both are surprising, one is unexpectedly hilarious.

This is the all-new Spider-Man. Sony and Marvel have a hit.

In the end: THIS is the Spider-Man we’ve been waiting for, back where he belongs. Excelsior!