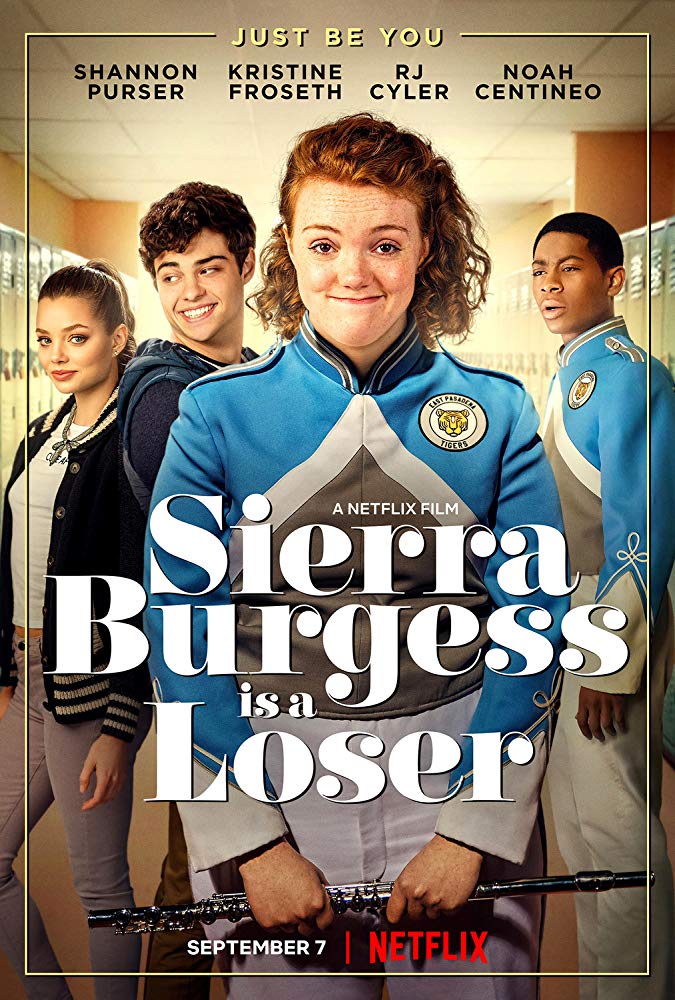 Sierra Burgess is a Loser

by Sherin Nicole & Alex Bear (aka The Clones)

Basically: Peter Kavinsky and Barb make a movie but, despite their universal charm, this “Catfish is a can’t fish”.

It’s not news that high school rom-coms have a formula. Here’s the mix for Sierra Burgess is a Loser: take Molly Ringwald from Pretty in Pink, mash her up with Cyrano (the classic), season with John Hughes movies, toss in a splash of Heathers (the classic), and shake until it rattles you.

Sierra (Shannon Purser) is a confident and curvy high school girl: she’s in marching band, her best friend Dan (RJ Cyler) is annoying, her poetry is lovely, and her parents (Lea Thompson, Alan Ruck) are really, really ridiculously supportive (to the point where it might require therapy). Everything in her life is going pretty well, but the kids at her school seem to think she’s a loser. Especially resident mean girl and so-very-Heather, Veronica (Kristine Froseth)…yup, even her name is Heathers. When Veronica runs into the rival school’s quarterback she gives him Sierra’s number as a prank. Enter our beloved Peter K. aka Noah Centineo or, in this case, the character Jamey. 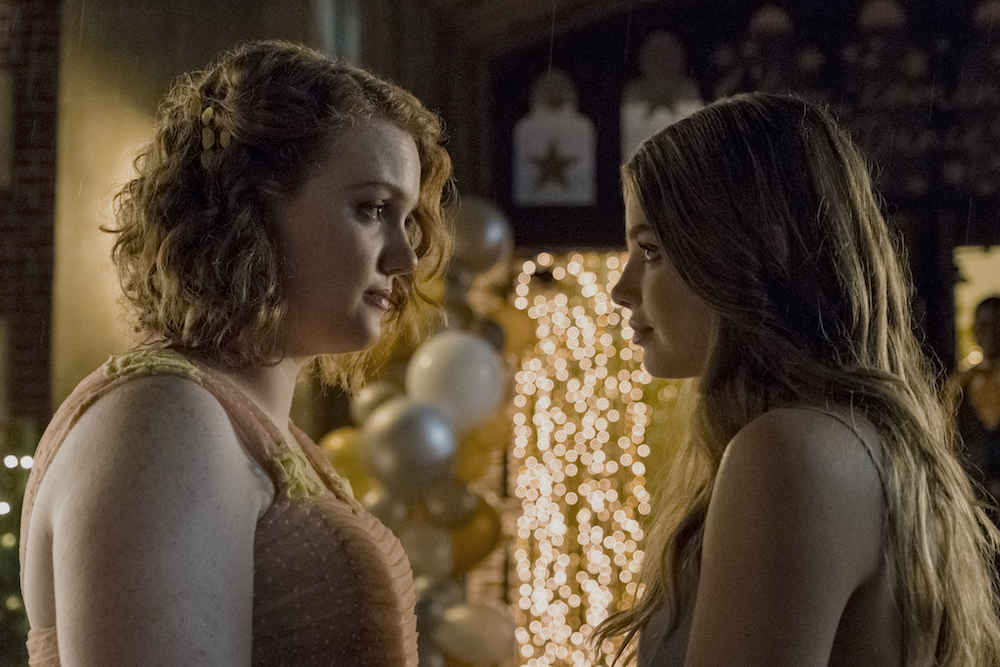 Thus begins an elaborate Catfishing scheme in which both Sierra and Veronica trick Jamey for their own goals. For Veronica, it’s tutoring to improve her grades (to impress another guy) and perhaps to have someone in her life who doesn’t demand perfection from her in every moment. For Sierra, it’s a real connection with a boy who’s swoon worthy because he’s more than cute—he’s a real one with a brain and a soul.

The set-up is good. You can always lean on the classics, especially when it’s two of the Top 5 high school rom-coms of all time. Add those to classic literature and you typically come up winning. Look at Clueless (Emma) and Ten Things I Hate About You (The Taming of the Shrew). Unfortunately, Sierra Burgess only read the Sparknotes—it understood the concept but didn’t grasp the intent. The intent being discovering the better parts of ourselves through falling in love. Instead the movie leans too hard on stereotypes, cliches, and disheartening fat, queer, and disabled jokes—we’ll come back to that.

Shannon Purser and Noah Centineo are our #baes because of their ability to connect. They deserve the love but they’re working hard in this movie. For many their charm will be enough, but if you look beneath the surface there are troubling themes in Sierra Burgess, and also in Insatiable. Both seem to be telling us fat women are mean and vindictive; that fat women are bitter because of their size and are therefore angry. We see this in both Sierra and in Veronica’s overbearing pageant mom (Chrissy Metz). But this movie insults girls of all sizes—it plays into the stereotype that only “thin” [read: “pretty”] girls can get guys interested in them, but those thin girls don’t have “good enough” personalities to get guys to fall for them. Perhaps if the filmmakers had flipped our expectations and the final takeaway was: We should stop telling girls they aren’t enough. Then we might’ve connected with Sierra Burgess. No luck with that, there is nothing revelatory or encouraging about this movie and you’re often uncomfortable with what it’s trying to say. 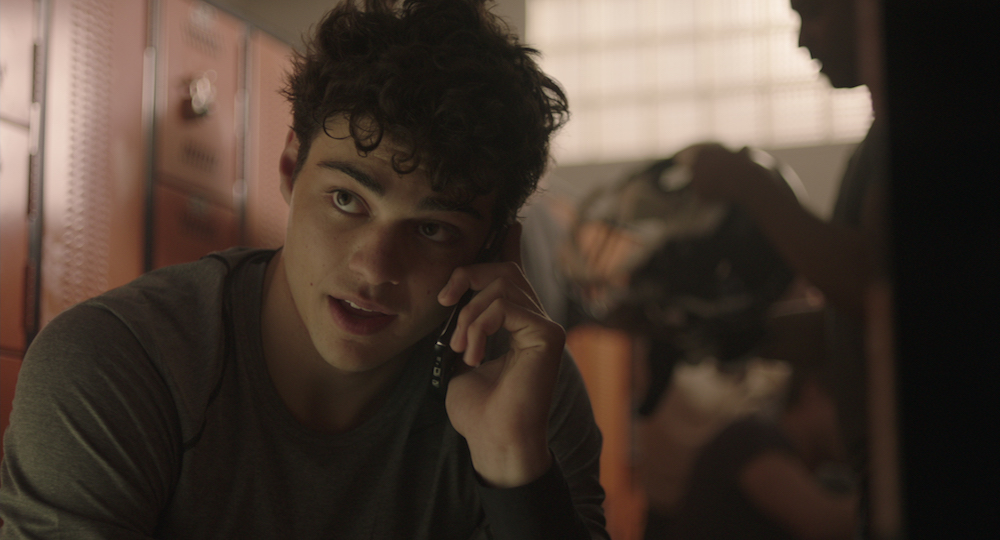 The perspectives are old, and we mean pre-80s old, and therefore insensitive. The insults are everywhere and no current teenager would use some of these terms. There’s a scene where Sierra pretends to be deaf to prevent Jamey from recognizing her voice and, in a double slap to marginalized people, Dan says, “She can’t hear anything that I say, even if I say something like, ‘She’s a hermaphrodite’.” She pinches him because “how insulting” (read that in sarcasm font). Deaf jokes? Intersex jokes? Does this movie realize it’s set in 2018? Sierra is also frequently called a lesbian and told she’s looks like a man, while the so-called “mean girls” mock the trans experience repeatedly. Being fat, or LGBTQIA, or disabled isn’t a punchline. This movie tells us all those things are somehow wrong, it uses them as insults and that’s…deeply insulting but, worse, harmful.

All of this and we haven’t told you Jamey is catfished AND KISSED without his consent. The girls switch places for that too. He puckers up for Veronica but is blindfolded and kisses Sierra instead. This is not okay. In a time when we’re working to make consent a clear and conscious part of the culture, this movie says to hell with it. With all these problems of consent, fatphobia, every kind of queerphobia, underlying misogyny, and ableism we suddenly understood why the opening score sounds like the soundtrack for a slasher movie. Well done there, we were frequently horrified.

Yet the movie would have us believe that it loves Sierra and is concerned about her growth so that she can deserve Jamey. It claims that it loves Veronica and only wants her to be comfortable with her fat mother and lack of intelligence so she can deserve Sierra. Meanwhile despite the title of “best friend” everyone seems to hate Dan including Sierra and the movie itself. The truest thing about Sierra Burgess is a Loser is that: A lack of confidence can make you do the most ridiculous and self-loathing things.

Let’s focus on that as the good, because while writing this review we realized there are no cute moments in this film that get you in the heart. Nothing stays with you after watching Sierra Burgess is a Loser except an icky feeling and the hope Purser and Centineo will team up again for a film that’s worthy of their charm.

In the end: Sierra Burgess is a Loser falls short of the 80s movies it’s trying to emulate, taking all the outdated things from that decade but none of the heart and no sense of what rom-coms might be in the future.