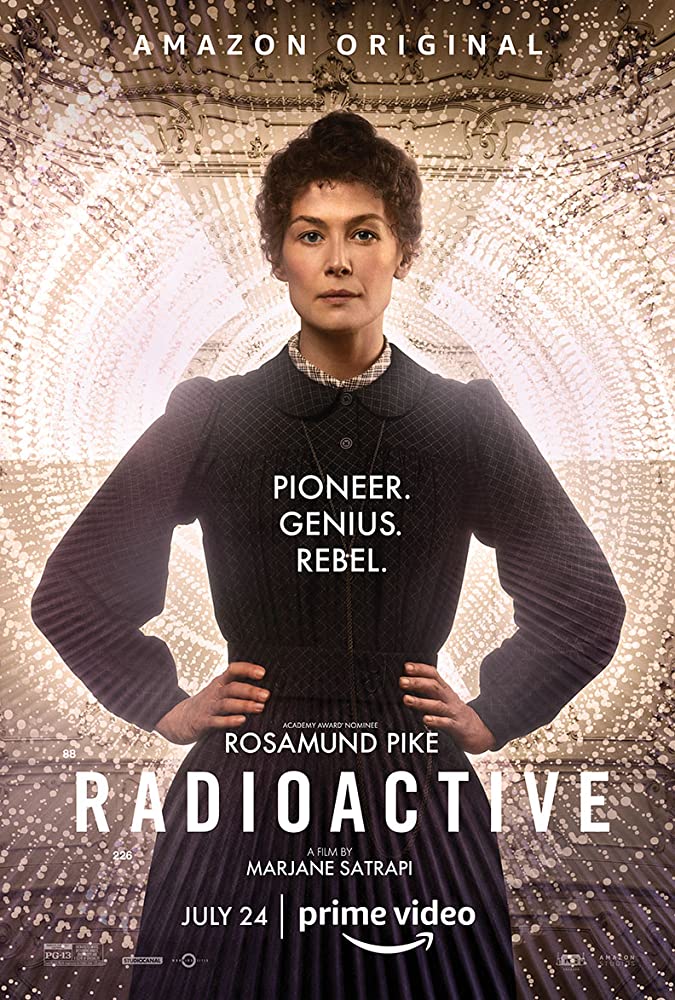 Basically: The life of Marie Curie, as she discovers love and radioactivity.

Everyone knows her name. She was the first woman awarded a Nobel Prize in 1903 (she got another one in 1911 and her daughter got one in 1935), but what do we really know about Marie Curie?

Madam Curie (Rosamund Pike)—as I have always known her—was a brilliant woman who wanted only to pursue science. She was lucky enough to find a man, Pierre Curie (Sam Riley), who was just as devoted to science as he was to her, and they were able to fill their short life together making discoveries that make our lives better in many ways. After Pierre’s death, Marie continued on—even creating a mobile x-ray truck to be used in the field during World War II—until she ultimately died of anemia, caused by her exposure to radiation.

Did you know that you STILL can’t touch any of Curie’s notes, not even her cookbooks, they are that contaminated? I’m not spoiling anything. This is all in the history books; most of this movie is in the history books. It is what the script, actors, and director do with history that make this film so engaging. I watched this from home (thanks, COVID-19) and I walked into it with my phone in my hand. I expected to be underwhelmed. I mean, honestly, aren’t you thinking the same thing? Well, it didn’t take long for the phone to be put away and for me to switch to a bigger screen. Even my wife (who was across the room doing some work) got sucked in.

Pike and Riley have palpable chemistry on screen (if you will pardon the pun), aided by dialogue that is masterfully crafted. That combination of actors and lines allows us to really enjoy the relationship and mourn its end. Director Marjane Satrapi (writer/illustrator of the hit graphic novel Persepolis) is able to get Pike to a place where the anguish over Pierre’s death is real and long-term. I also love the fact Pike is able to be “not pretty.” As the movie goes on, her skin becomes nearly translucent and it is eerie and wonderful to see the toll Curie’s science has on her. Sadly, not everything was wonderful in this movie. I was set up for a period piece and out of nowhere we jump into the 1950’s. These little “how has science benefited from Mdm. Curie’s discoveries” vignettes continued throughout the movie. I was confused and disappointed. Everytime one came on screen I rolled my eyes. They were unnecessary and pulled me out of an otherwise wonderful movie. This documentary style vignettes would have been perfectly placed near the end of the movie, as we follow Curie into death, allowing both her and us to see what she accomplished. Instead, they just break the tension and bring you out of the movie.

Another irritating section was a dream sequence right after Pierrie’s death, which gave nothing to the movie and was just an exploration of glow effects combined with Pike’s ability to look devastated.

These two things could have easily been discarded to make room to explain the time jump in which Mdm. Curie’s children are babies one minute and the next minute young women, bringing suitors home, or even the aftermath of her affair with a married man or, hell, the toll the war took on her career and her life.

In the End: When you hear the title you think immediately of a boring period piece…and it would have been if not for exceptional dialogue and actors (just fast forward through the bizarre future vignettes and you’ll be fine).