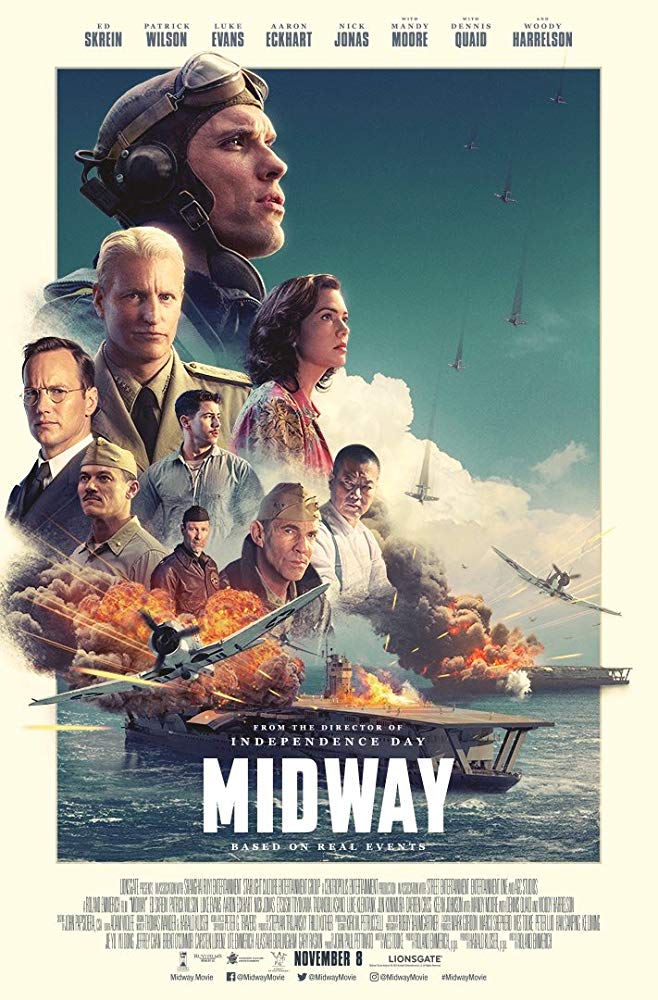 Basically: Everything leading up to the Battle of Midway (including the attack on Pearl Harbor) and the battle itself.

Okay, hang on, let me catch my breath.

WOW! What a ride!

Midway focuses on WWII Navy pilot Dick Best (what a name!!!), played by Ed Skrein, in the aftermath of Pearl Harbor and into the Battle of Midway. Sometimes war movies get too caught up in telling personal stories, in an attempt to give us a touchstone in the midst of an event too big for us to comprehend. Sometimes they don’t bother with the attempt…Midway is one of those times. I’m not saying they don’t give us someone to root for—they do—BUT the focus is on the action. Where it should be! The action is EPIC, the effects are dazzling, and the tension director Roland Emmerich has built into each scene is intense.

There is an all-star cast, including the shockingly believable Woody Harrelson as Admiral Nimitz and a grizzled Dennis Quaid as Admiral Halsey, among others.

Where Midway falls down is in the storyline. It feels like someone filmed all these great action scenes and then decided to write a script to hook them together…but nothing more. We don’t get any great connections between any of these men and their wives (with the glorious exception of Edwin Latyon (Patrick Wilson) and his wife Miriam Layton (Rachael Perrell Fosket), who I would watch interact for an entire two hours). Best and his wife (played by Mandy Moore) are stilted and somber. And while Moore is supposed to be from New Jersey, she has no accent while her husband’s is a bit overpowering. Also, some of the macho interactions between the men are so painfully expected I said a few of their lines before they did.

BUT have I mentioned the action scenes? Seriously edge-of-seat, heart-racing, holy crap stuff! The action is worth the price of admission. Just don’t roll your eyes too hard when Skrein tries to show an emotion other than grinding his teeth.

In the End: Go see Midway for the jump-out-of-your-chest tension and full-on action…not so much for the scenes in between.