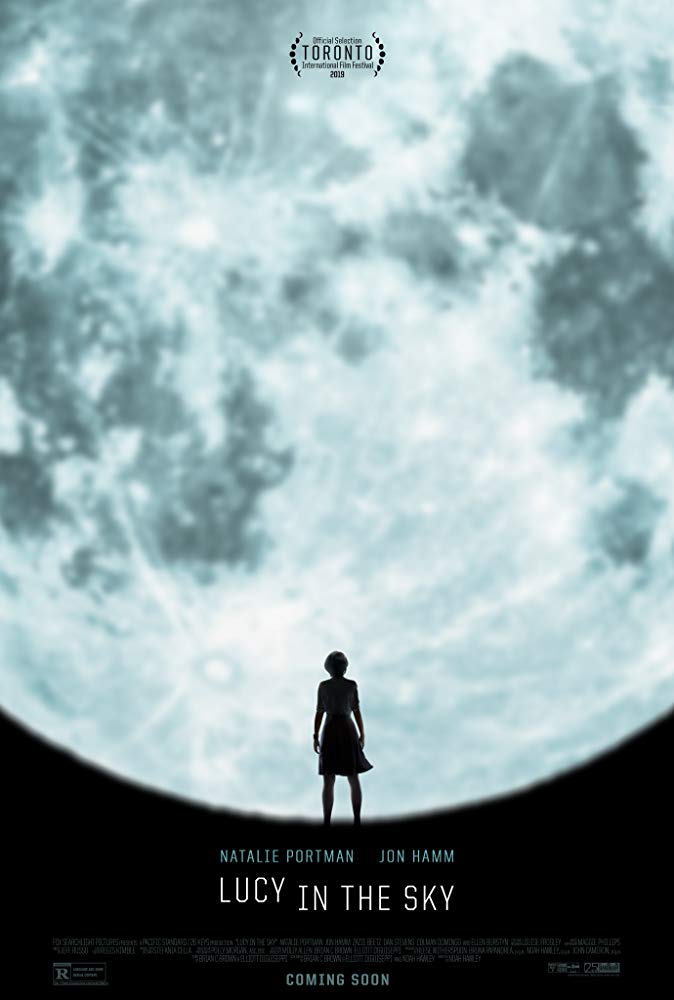 Lucy in the Sky

In 2007 a female astronaut, furiously jealous because the male astronaut she was sleeping with was also sleeping with someone else, drove from Texas to Florida with the intention of attacking the other woman. Lucy in the Sky tells us it is inspired by a true story, and while it draws some of its details from what really happened, there is very little inspiration evident on screen.

Natalie Portman plays Lucy Cola, who has made up for the chaos and dysfunction of her family by being competitive and ultra-capable. Her mother drank, her father was a deadbeat, her brother is an irresponsible single dad who disappears now and then, leaving his teenage daughter with Lucy and her husband (Dan Stevens). Lucy is intensely competitive, always keeping her eye on triumphing over whatever challenge is next. “You’ll just have to work harder,” the grandmother who raised her (Ellen Burstyn) advises, and we can tell that is her standard advice. She has succeeded at everything because she refuses to stop until she does.

We first see her floating in space. Ordered to return to the ship, she insists on a little more time to absorb the vastness of the universe. (Along with Ad Astra, this is the second film in a month to show us a personal and existential crisis in outer space.)

On her return, Lucy is in the most mundane of ordinary tasks, waiting in the carpool lane to pick up her niece at school. She has a routine debriefing with a counselor (Nick Offerman) who gently asks her whether the experience was disturbing. He quotes Apollo 11’s Michael Collins, who wept as he piloted the rocket behind the moon while Neil Armstrong and Buzz Aldrin made their historic landing. He was “consumed by darkness” and said he was profoundly alone. “It’s hard to put into words,” Lucy says. But she liked it and wants to go back.

He urges her to take a break. “Can you stop?” But she only knows how to achieve mission objectives. Without a fixed mission, her mind starts spinning. And then, another astronaut invites her to go bowling with others in “the club”—those who have looked at Earth from outer space and have had their perspective permanently changed. He is Mark Goodwin (Jon Hamm), recently separated and a bit of a mess, unlike Lucy’s stable, sweet, hand-holding-grace-before-meals husband (Dan Stevens). They have an affair. And then things spin out of control. And so does the movie.

There might be an intriguing story here about how seeing things from a—literally—broader perspective could make someone rethink choices and priorities or how the pressure of being perfect can stem from deep insecurities which can cause distortion and collapse. This film touches on all of that but we keep being distracted by Portman’s efforts at a cornpone accent, some camera tricks with the aspect ratio of the frame, and shifts in tone.  The actors do their considerable best, but at times they seem to be acting in different movies. The overly cutesy idea of naming the character Lucy so that The Beatles song can play on the soundtrack is jarring and out of place.

The story could have made a pretty good Lifetime television film, a soapy melodrama starring some third-tier actors. Instead, it is an awkward, wildly uneven film that shoots for the stars—quite literally—and falls far short.