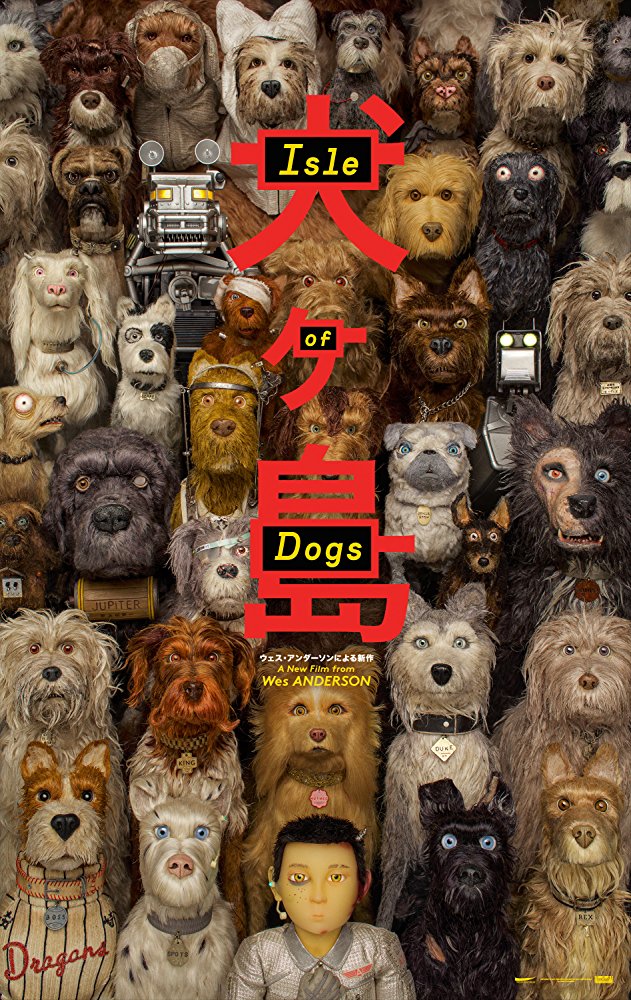 Basically: A new stop-motion film in the Wes Anderson genre—duh, that’s a thing.

It’s 2018 and Wes Anderson is back…and he’s back with another animated film, his second after the great Fantastic Mr. Fox nine years ago. Anderson is a hipster film auteur darling, making movies that are quirky little tales about groups of people trying to connect to each other. His movies are full of heart even though they seem custom made for the Portlandia crowd. So what new journey does Wes want to take us on now? This time he decided to make Isle of Dogs, a movie about a boy on an island of talking dogs, that sounds like a children’s book that you’ve read but doesn’t exist.

So what’s going on with this movie? It’s set in a near future Japan where all the dogs in a prefecture have a virus called the Canine Flu. Now Mayor Kobayashi (Kunichi Nomura), a member of a clan that historically loves cats and tried to get rid of all the dogs before, decides to quarantine all canines on a trash island so the virus doesn’t jump species. The Mayor’s ward, Atari (Koyu Rankin), decides to steal a small plane and fly to the island to find and save his bodyguard dog Spots (Liev Schreiber). There he meets a pack of dogs, all leaders per their description, Rex (Edward Norton), King (Bob Balaban), Boss (Bill Murray), Duke (Jeff Goldblum) and Chief (Bryan Cranston) who all decide to help the young boy after his plane crashes.

Isle of Dogs is a beautiful display of stop-motion animation and Anderson makes great choices with his shots. This film, more than his last animation, Fantastic Mr. Fox, looks more like a Wes Anderson live-action. The placement of the camera and and the staging of the characters reminds of Anderson’s Grand Budapest Hotel and Moonrise Kingdom. Isle of Dogs has that usual flair of whimsy and awkwardly playful dialogue. The movie also does a great job of mixing moments of 2D animation with the stop motion. This mix gives the audience visual clues to story beats we might’ve missed, making IOD worth a serious re-watch.

One thing people may take issue with is that Isle of Dogs is set in Japan with Japanese characters but the filmmakers are mostly western. Some could see this as fetishizing Japan, its culture and people. Most of all, the Japanese characters all speak in their native language with no subtitles and only occasional translation. It’s an interesting choice that might leave some feeling excluded. But, man, these dogs are fully realized characters and the voice acting is fantastic. The issues above are subjective because the quality of craft in the filmmaking is stellar; it can be seen in those ways but those will be personal issues and preferences rather than flaws in this film or in Anderson’s intent. Isle of Dogs has already set the standard very high for this year in animation and could already be the front-runner for Best Animated Feature in next year’s Academy Awards.

P.S. The crying in this film is amazing, still trying to figure out how they animated it!

In The End: Wes Anderson continues raising his personal bar on auteur level filmmaking and his animated dog movie is a classic.