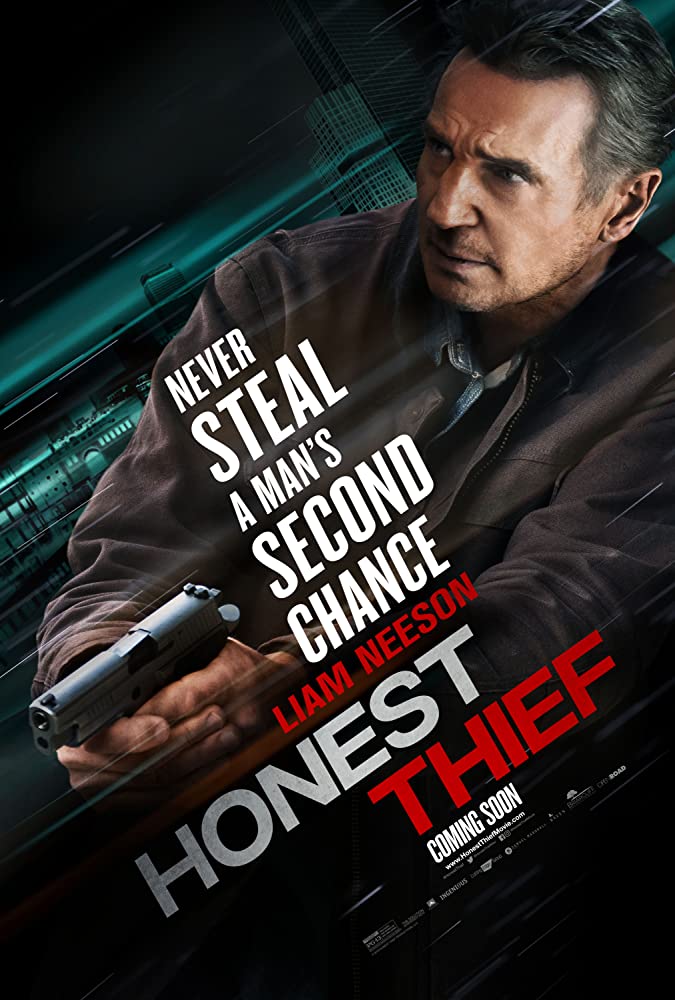 Basically: When Liam Neeson comes for you it’s because you’ve done wrong, no matter which side you’re on.

I have a few thoughts about Honest Thief. Hopefully by the end of this review I’ll be able to pull them together for you.

First, it never occurred to me that Liam Neeson would be the heir to Arnold Schwarzenegger’s action empire. Not until I saw Taken (2008) and realized it was the redux of Commando (1985) that I always knew I wanted. (You can attempt to judge me but I have no regrets.)

In his action movies, Neeson is a more tactical, more strategic version of Arnold but the bones of the films are the same—tropes of betrayal, and family, and old wounds. Yet where Schwarzenegger offered adrenaline laced bombast with fantastical set pieces, Neeson goes with methodical thrillers with realistic action and slowly building menace. Both work well for their times. Both have an almost classic tenor.

Second, I often wish the women in action movies—who aren’t the number one lead—would emulate Sarah Connor from the start. I know not even that famous femme started out as someone who’s down for whatever and infinitely ready to protect the future, but I did say this is a wish.

Third, I have good news but not exciting news.

Liam Neeson has a respectable reputation for choosing solid action features and Honest Thief holds up. It’s the story of Tom Carter, a former Marines demolitions expert and a bank robber who specializes in blowing safes for emotionally believable reasons. Tom meets a quirky yet smart woman at a storage facility. Tropes abound. Her name is Annie (Kate Walsh) and, if we refer to the big book of kabloom movies, we know she’s going to change Tom’s life. We can also anticipate how that change is going to blow up in his face (yes, that is an explosives pun…it was just sitting there so I took it).

The “honesty” of the title comes in when Tom decides his new life with Annie will be tainted if he doesn’t justly pay for his crimes. That’s when four FBI agents enter his life and, once again, the tropes provide one of each kind of filmic agent. There’s the newly divorced one with the deadpan sense of humor (Jeffrey Donovan); the grizzled former military one who’s seen it all but still plays by the book (Robert Patrick); the young father who’ll do anything for his family but draws the line somewhere (Anthony Ramos); and, finally, the one who seems like they’ve spent their entire lives waiting for the perfect opportunity to go bad and when they do it’s like they were born with the villain gene (Jai Courtney). What? The villain gene is science, look
it up.

Back to the good but not exciting news. Honest Thief is a well composed and efficient film. Everything writer/director Mark Williams throws at us, the most minute details, have meaning later in the story. The action sequences have weight and a sense of reality that requires very little suspension of disbelief. Wounds don’t just disappear, impact has consequences. And the actors know what they’re doing. It is a solid, almost classic styled, action movie. It works. But it is unlikely to become your favorite. Perhaps there’s little too much ‘methodical’ and ‘sensible.’

I found myself waiting for the movie to remix the tropes, to shock me with a moment of “what!?” I wanted Annie to be an interesting twist on the usual action wife/girlfriend—that’s probably not fair, and totally Schwarzenegger’s fault, but I longed for a Sarah Connor or a Cindy. I just did. Especially since Neeson and Arnold have their whole synchronicity thing going on. I kept waiting on a thrill. None came and yet Honest Thief is a respectable 1 hour 38 minutes. It works. Actually it works well but it never quite detonates.

In the End: If you’re into action films you might enjoy it…but you probably won’t be yelling “I’ll be back!” at the end.