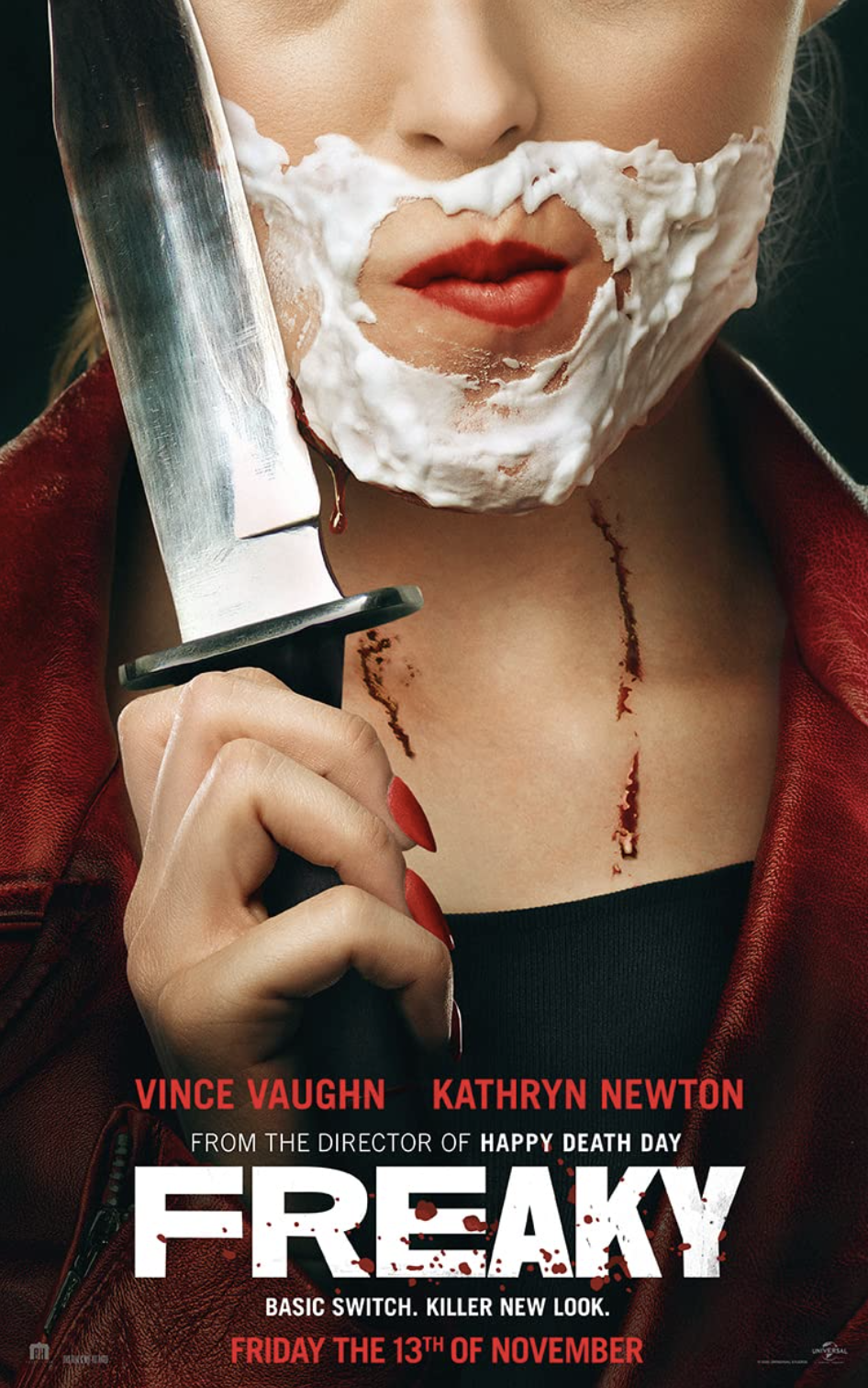 Basically: A teenage victim and a middle-aged serial killer exchange bodies; hilarity (and a couple of murders) ensue.

Millie Kessler (Kathryn Newton) is a milquetoast teen with: a cop for a sister, an alcoholic for a mother, a dead dad, and a huge crush on the most popular guy in school. That all changes, though, when a local serial killer (Vince Vaughn) targets her with an ancient magical dagger and they switch places. Cue the confusion as Millie tries to get her own body back.

So, Freaky is one of those movies…you know, the ones that don’t quite fit into the genre they claim to be. So, if you walk in expecting horror and gore, you’re going to be slightly disappointed. This is a dark comedy and it is wonderful in all its twisted dark glory. Still, I wouldn’t expect anything less from Christoper Landon, director of Happy Death Day (another amazing movie you should check out if you haven’t already). Landon makes the best of the small town vibe and the technicolor violence, while also delivering a story that is top notch entertainment. He coaxed stellar performances out of his stars and has given delightful roles to the secondary actors too. Nothing in Freaky seems small or dismissed, even the silly things feel like they were planned—the picture of Josh and his mom in their foyer and the pronoun reminders were the best!

Kathryn Newton’s transformation into a middle-aged serial killer is everything I want it to be, right down to the boob grab. She is great in this part, going from wide-eyed innocence to evil incarnate so smoothly that I don’t doubt her transformation for a second.

Still, the real star is Vince Vaughn! His teen-girl self is hysterical and endearing. You’ll find yourself delighting in the teenaged reactions he delivers with 100% conviction. He is never Vince Vaughn trying to be a teenage girl, he is a teenage girl who happens to be trapped in Vince Vaughn’s body. Everything from the way he walks to the vocal intonations are spot on. He’s a delight in this movie (and I will never stop giggling at the bathroom scene).

I just can’t get over this movie. Freaky started with a bang—or rather, a stab—and it didn’t stop. It was scary like Friday the 13th but with an overlay of comedy that had me giggling at the most inappropriate times and gaffawing at others.

In the End: Indulge in this movie with a couch and a blanket and the biggest bowl of popcorn you can find. You will find yourself giggling and then looking around to see if anyone noticed (but don’t worry, we are all laughing with you).