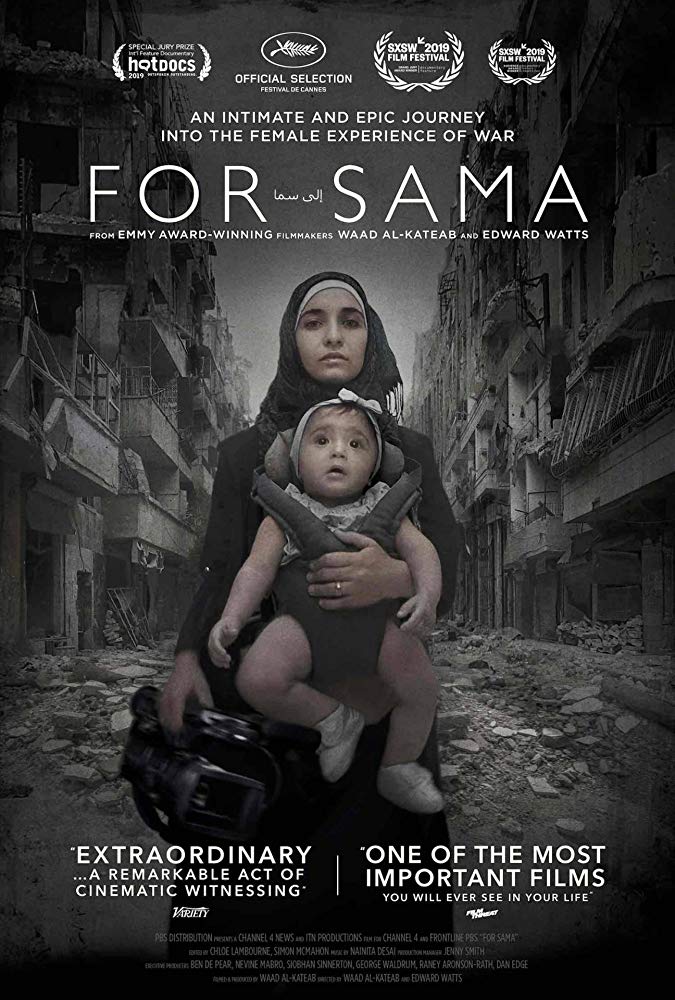 For Sama is a tough movie to watch. It was filmed by journalist Waad al-Kateab during her five years in the Aleppo uprising. We follow her, young and idealistic, from the beginning of the peaceful protests through to her eventual exile.

Uprising is a kind word for what she lived through. Brutality…torture…no, let’s call it what it is —the evil we see on the screen, perpetrated against the citizens of Aleppo, is horrific. And yet, through this maze of destroyed buildings and the haze of chlorine gas, Waad takes us on a journey to find herself and her truth. In a make-shift hospital she meets her husband. Then later, as planes threaten from above, she gives birth to their first child, Sama. The sweetness of Sama’s face softens the blows of losing people who are just trying to offer aid to those in need. Yet, even her innocence isn’t enough to overcome the violence that accompanies her first year of life.

Let’s not talk about the fact that Waad had the opportunity to get her child out of a war-zone—I understand the feeling of a higher calling, as well as the selfishness of love. Her choices are her own to make and live with.

This documentary isn’t for the faint of heart. There are a few technical issues—sometimes the subtitles are easy to miss or move too fast, while some scenes move so quickly I had to close my eyes—but they’re quickly swallowed up by the raw truth Waad is recording. And sometimes we need to be reminded of this reality, which is why films like For Sama are so necessary in our privileged American culture. It tells the story without flinching and without explanation. The film leaves us to wonder at how lucky we are to live in a country where death is distant and abuse is the exception not the norm.

In the End: Walk into this movie knowing that it will be difficult to watch. It will haunt you, it will touch you, and you will walk away knowing that truth, while necessary, is a very ugly thing to behold.