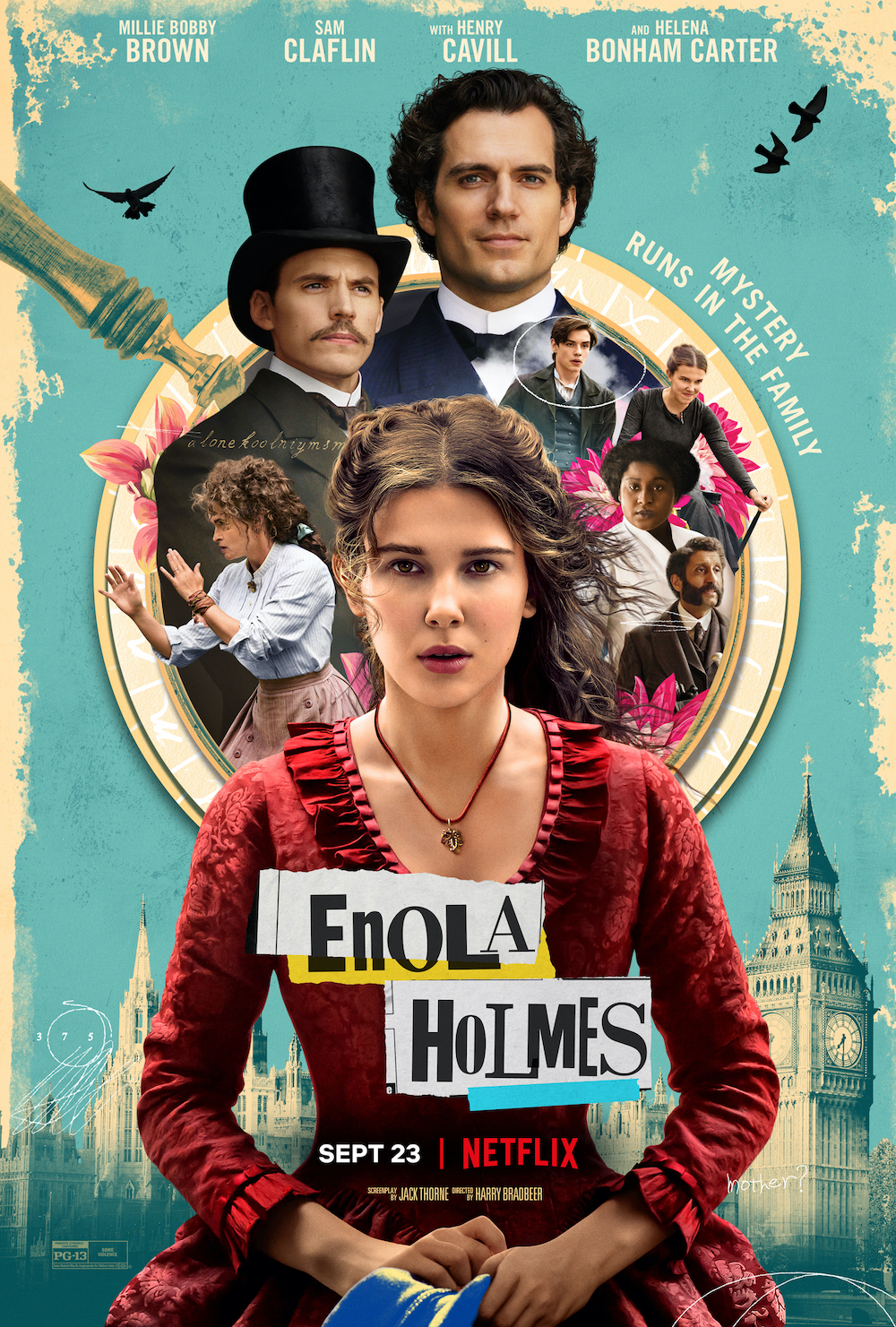 Basically: Sherlock’s sister is cleverer than her siblings and these are her adventures.

Our favorite stories tend to have wonderful wide open spaces, places where new generations of writers can fit whole new adventures and characters. The world of Sherlock Holmes is proof. As it turns out Eurus Holmes, who was introduced in the Sherlock series on BBCAmerica, wasn’t the first time someone imagined a younger sister for Sherlock and Mycroft. In 2006, Nancy Springer began her own book series with The Case of the Missing Marquess. Enola Holmes was Springer’s lead and now Millie Bobby Brown has become the same heroine for Netflix. Miss Enola Holmes is an incredibly bright (as to be expected) and sharp-witted sixteen-year-old girl raised by her mother, Eudoria (Helena Bonham Carter)—a feminist, freethinker, and jujitsu practitioner. Yet both the Holmes brothers seem to have forgotten these two women exist…until Mrs. Holmes disappears. Of her own choosing it seems. It’s left up to Enola to find her (if mum chooses to be found), because one brother is too stuffy and the other is too repressed (we’ll leave you to figure out who is who). What follows is an adventure through the streets of 1880s London as Enola becomes entangled with another runaway: the Viscount Tewksbury, Marquess of Basilwether (Louis Partridge). Through her need to escape Mrs. Harrington’s Finishing School, coupled with the quest for her mother, and tripled by the need to protect boys who can’t be left to their own means, Enola uncovers a sinister and rather explosive plot that proves it’s not just the boys of the Holmes family who aren’t very well behaved.

From the moment Enola Holmes tells her brothers she’s read Mary Wollstonecraft, you’ll know this movie isn’t about a young woman who they can force to conform. Enola (alone spelled backwards) is self-sufficient and perfectly capable of making it on her own. And those moments are when this movie is the most fun. Whether she’s telling off the Marquess in a field or setting the good detective straight, Enola has verve and charm and you can’t wait to see just how clever she can be.

And that cleverness is sharpest when she’s verbally sparring with her brothers—and winning (although we do wish she’d break her poise and smack them, just once). The writing is (almost) as smart as she is, filled with quick wit and winks to the audience. Enola Holmes fits right into the Holmes world but still stands completely and utterly on her own. With an assist from the viscount-in-distress—a boy who might need saving but proves to be just as much of a challenge for Enola as the various people chasing them (it must be his “prodigious” charisma).

This is an adventure you’ll want to watch with all the femme fans in your life. You might be perplexed by how often Enola and Tewksbury find themselves in a room full of weapons yet never manage to pick one up (seriously, so often) but you’ll cheer them on at every twist and turn. (Or each time Enola breaks the fourth wall to winkingly let us know we’re all in this together).

We can’t wait to see where Netflix and Legendary Pictures will take us in Part 2 – The Case of the Left-Handed Lady (we have a feeling there’ll be more).

In the End: Onward, Enola!