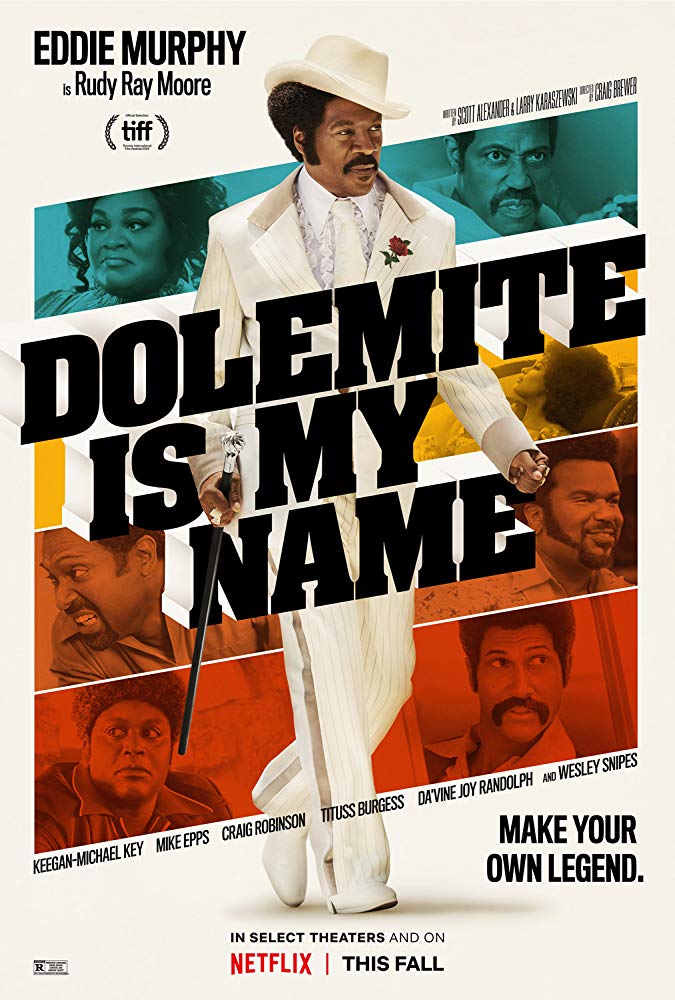 Dolemite is My Name

Basically: The story of how comedic icon Rudy Ray Moore pursued his dreams no matter what.

It’s fascinating how this story of Rudy Ray Moore has become more about Eddie Murphy’s return to stand-up comedy—Murphy has been so quiet recently and missed from the public eye. Now the stand-up icon, who dominated the 80s–90s box office, is back with Dolemite is My Name. He portrays Rudy Ray Moore, a black celebrity icon of the time right before Murphy’s own turn as a star. Moore’s character Dolemite, who became the subject of the 1970 film of the same name, was a cult classic of the blaxploitation era of cinema that inspired many a comedian and a ton of hip hop artists.

When the film starts, Rudy is a down-on-his-luck comedian trying to get people to notice him in any way he can. In a last-ditch effort, he takes old jokes he heard from local homeless folks and turns them into a brand new character of Dolemite. Murphy does a lot here with his acting, he’s subtle and very funny as Moore, a man who refuses to give up or let anything stop him from achieving success. He plays it well with an external look of confidence though you can see he’s unsure as he pushes through. Murphy also bounces off his co-stars well especially with Da’Vine Joy Randolph as Lady Reed, his protégé and at times his main support system as he falls prey to his insecurities. I like that her character is his equal and not a love interest—she’s a true partner in crime instead of a forced romantic plotline. Another person who must be mentioned is Wesley Snipes, an actor we haven’t seen much in this decade since the troubles of his past pulled him from the limelight. He is completely hilarious in his role as director D’Urville Martin who turns Dolemite into a film. Snipes plays Martin as an unearned snobbish, dandy-like figure who steals every scene he’s in with his facial expressions alone. Craig Robinson, Mike Epps, Tituss Burgess, and Keegan Michael Key round out the cast, each bringing something different to the picture as Martin’s crew and Rudy’s confidants who help him achieve his goals. Epps brings his usual charisma and Key does great as largely the straight man of the ensemble.

Director Craig Brewer (Hustle & Flow, Black Snake Moan) shows these characters with care and not in an exploitative way. His use of the camera does well to show you their faces and eyes. On top of that, this film is hilarious—every joke hits from simple lines to physical humor. Dolemite is My Name really sings when it recreates parts of the 70’s film—the recreations are so on the nose it might make you want to sit and watch Dolemite.

In the End: Dolemite is My Name is a great return to comedic form for Eddie Murphy and a love letter to a 70’s classic.