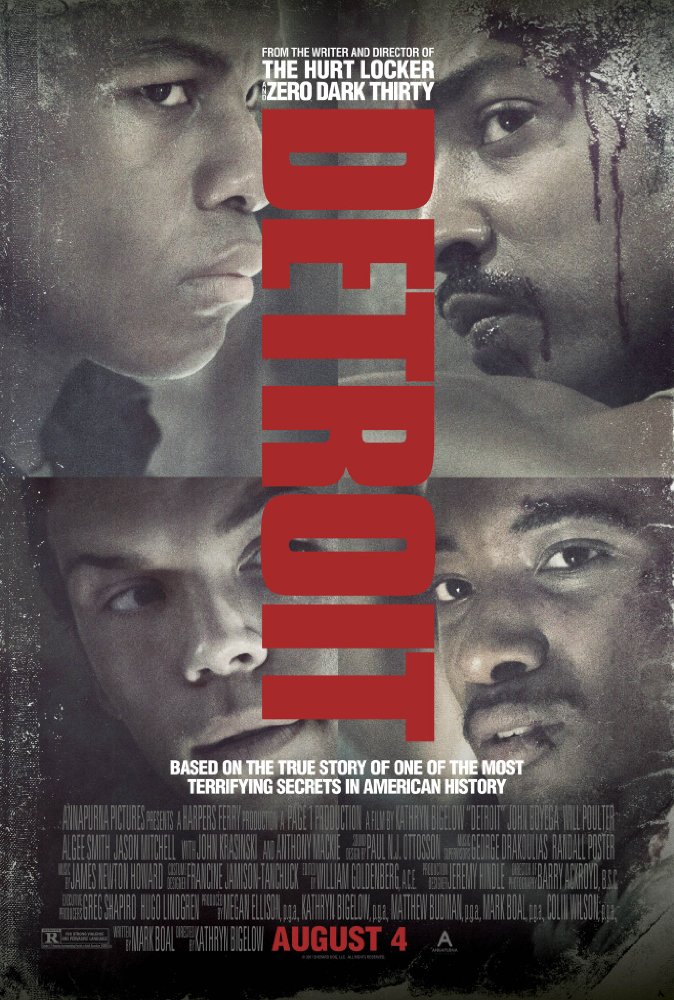 Basically: A dramatic telling of police brutality during the 1967 Detroit Riots

How to start a review of Detroit? It’s hard because this is not a feel good film—most of Kathryn Bigelow’s recent films aren’t, so that is no surprise. But something is different here. The film starring John Boyega, Will Poulter, Algee Smith, and Anthony Mackie is about the Algiers Motel Incident during the 1967 Detroit Riots. On that night police officers murdered three black youths and beat others in a failed raid on the hotel due to presumed sniper fire. To get the basics out of the way, from a filmmaking and performance perspective, Detroit is very well done. Bigelow and her cinematographer Barry Ackroyd and editors William Goldenberg and Harry Yoon all do a fantastic job of building tension throughout the film. Shots focusing on the actor’s faces really sell the power of the performances. You end up falling deeply into the story and the setting, and that is where some of the problems lie.

As a black person you’re sitting there in the seats and you’re seeing all this trauma on screen—these policemen commit horrible acts and get away with it completely. From that standpoint it becomes a horror film, but different from Jordan Peele and Get Out, which is cathartic. Detroit leaves you square in the terror, it makes you ask what and who this film for. For most black people in the United States the horrors depicted are a constant struggle we don’t need to be reminded of. Here the events are being sold as something forgotten in the America archives, but this type of brutality happens all the time only now we see it on Facebook Live and TMZ. That realization brings about a depression in the knowledge there has been very little progress for black Americans.

That understanding leads me back to the question: Who is this for? I’m guessing the film is for the white liberal cinema going audience. The ones for whom these events are an abstract idea or symbolism. The people who seem to need to learn the humanity of black people through films that are celebrated only for showing us being killed and beaten throughout different periods of American history. For them it’s an amazing piece of filmmaking that shines a light on a distant past—for people of color, it’s a Tuesday.

After seeing Detroit, it was hard to sit down and write a review. Honestly, I’m uncomfortable with what to tell friends, especially black ones, younger ones, whether they should sit through this film. With Detroit, Kathryn Bigelow has made one of the top five films of the year, with some of the strongest performances yet, but it’s still not something I’m sure about recommending—I don’t know if the art is worth the trauma, no matter how well it’s made. I keep coming back to “who is this for?” and thinking about the why Dave Chappelle left his popular series The Chappelle Show: Were they laughing with him or at him? Well, is police brutality just a show, like grand Greek tragedy or nah? That’s what I’m struggling with.

In the end: You’ll see a well-made piece of cinema from one of the best auteur directors in Hollywood, but is the trauma worth the cost of admission?