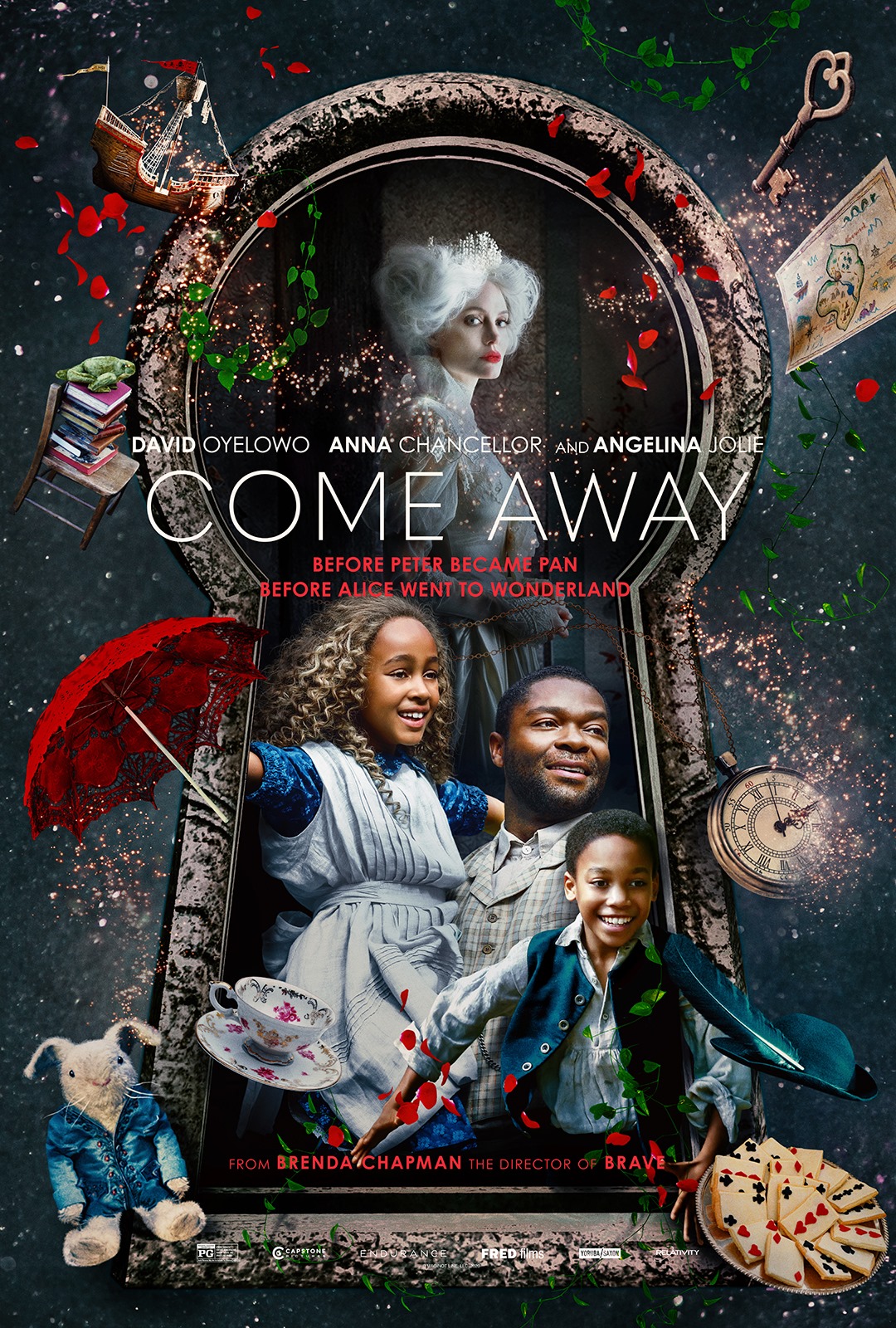 Basically: If only the magic & adventure in the trailer were as vibrant in the film.

The trailer promised the story of Peter Pan and Alice in Wonderland before they began. Siblings from a long ago London, the children of an English Aristocrat mother (Angelina Jolie) and a Black British commoner father (David Oyelowo), they were meant to be different from what we know. I’d imagined their journey would be fraught and yet somehow transcend. Silly me, I’ve gone and imagined one too many impossible things today.

At rise, the Littletons are a happy family of five—six if you include their housekeeper. They live in a little cottage in the woods and the three children fill their days with fantastic adventures, weaving in and out of the trees, fighting pirates along the
river banks.

David (Reece Yates) is the hero among them. Peter (Jordan A. Nash) is the brigand. And Alice (Keira Chansa) is the daring Lady with a touch of femme fatale. They are a joy to watch. You should savor these moments, they are the last in Come Away. When David is taken from them at the river’s edge the family begins to crumble. While the film continues to be beautifully lit, designed, directed, and embodied, the story turns its focus to the malignancies of mourning and how magic is only the lie you tell yourself to get by. We know bad things happen but when it comes to Alice and Peter you hope the difficulties of life might somehow become something…else…

Director Brenda Chapman and writer Marissa Kate Goodhill had something else in mind and while Come Away is well made it isn’t well done. The narrative structure doesn’t quite hold together. We’re given bits and pieces of plotlines—bare facts behind too many stories—that go unresolved or are never fully brought into the light. Without that illumination those plotlines lack the emotional impact that would bring clarity to characters. They are relatable in their grief but we never get beyond that. What we have instead is a domino chain of bad things encased in a loose idea of why those bad things were bound to happen. Perhaps these snatches of plot were meant to represent the ephemeral fluff of childhood memory. It’s possible, yet the film plays as though too many important scenes were lost in the journey from set to screen.

We are left with a pile up of plotlines, like tiddlywinks strewn on the floor, with no directions on how we might play the game or have a chance of winning. Unless, of course, you already know the tales of Peter Pan and Alice’s Adventures in Wonderland quite well or you are prone to mistaking delusion for escapism. Not that there is no place for tragedy—the vastness of film should reflect the totality of life. What is most irksome here is the need to tell the story behind the fairytales while discounting them completely. This movie seems to trade magic for madness. Which calls into question the decision to center it on a Black family. There is a fundamental problem in its inception. The idea that: ‘Hey, I’m going to turn Alice and Peter Pan into Black children’ only to whittle their transformative journeys down to a thin and bitter veneer, covering up a tragic reality. This is not a triumph of imagination. It is delusion. And it is grim (if only that were spelled with two mms).

It could be there is too much going on: All of these elements could have worked but, as I mentioned, they seem to pile up with no real examination and no space to grow into anything satisfying. And the idea that the Black family at its core is fueled by crime and cruelty bites. If you think about it, you may even feel this is the tale of a family with a history of untreated mental illness; from a time when therapy was greatly stigmatized or nonexistent…so, of course their delusions run rampant.

Most importantly, despite where the trailer might lead you, this is not a film meant for children. Not unless you wish to douse them with a cold, chilling bucket overflowing with the worst of reality. This is a film about children made for adults about how misguided we were when we imagined adventure. At least that’s what Come Away whispered to me.

For all its shininess and whimsy and casting and costuming, Come Away seems to amount to not much more than a lesson in misery. Time and time again, you think the film will find something to balance itself, to examine the nature of imagination, to push past the question of what’s wrong and find how we right ourselves again.
It doesn’t.

In the End: If you enjoy watching tales of imagination and adventure devolve into misery parades then strike up the band.