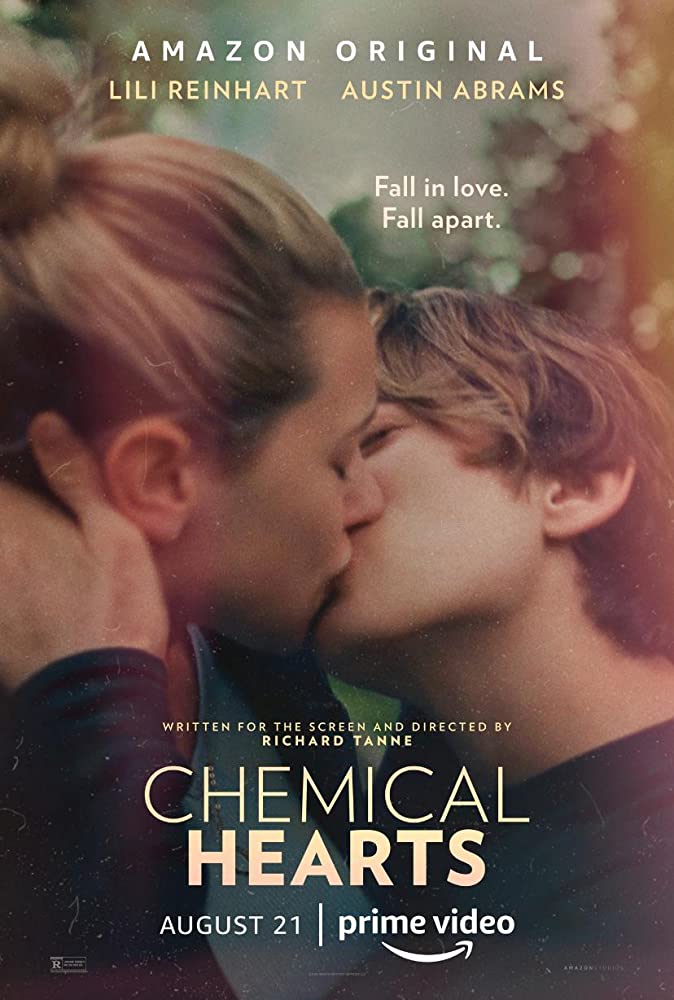 Basically: Boy falls for the new girl in town…but love (especially when you’re a teenager) is never easy.

Grace (Lili Reinhart), who recently survived a car accident, starts her senior year at a new school. There she meets Henry (Austin Abrams), and together they are assigned to co-edit their school newspaper. Their romance blooms in spite of all that stands between them…but love (especially when you’re a teenager) is never easy. While this couple tries to figure out what their particular brand of love is, we delve deeper into the trauma that drives Grace’s actions and watch the impact it has on Henry. It’s rare to find a teen movie that is serious and deep—one that addresses the painful growth process of a teenager, without pandering or putting a layer of bubblegum sweetness on top. Chemical Hearts strikes that fine balance. The sweet/awkward/painful romance we follow is played perfectly by Grace and Henry. Grace—with her traumatic background—struggles with finding love again. Henry—with his yearning and inexperience—falls in love with a woman who can’t let go of the past. It is cute but with a seriousness that makes this film seem a little more grown up than the typical teenaged fare.

I’m not going to say this is a masterpiece, it is not. The story is solid but thin. The romance is the central piece but you can’t focus only on two people in a story. You have to see how their love is impacting the others around them. You have to see the rest of their lives. While Henry’s parents make cameo appearances and his friends are often “hanging around” there isn’t enough to contrast Grace’s isolation with his supposedly full life. The pacing needs a little bump too. I found myself distracted in the quiet moments because there were so many of them. No matter that those moments were visually stunning, there were too many that lingered too long. In a lot of respects it reminds me of the Twilight movies.

On the other hand, I feel like Chemical Hearts captured the angst of being a teenager and the voice as well. All in all it isn’t a bad movie. Not my kind of movie but not a total waste of an hour and a half.

Finally, I was super pleased by the diversity in this film—it really reflects society now with different abilities, races, sexual orientations, etc. I want to see more casually diverse movies in the future. And I want even more diversity.

In the End: This will appeal to the teen girl in your life and perhaps even the teen boy. You won’t gnash your teeth if you are forced to watch it with them and you might even feel a little something.