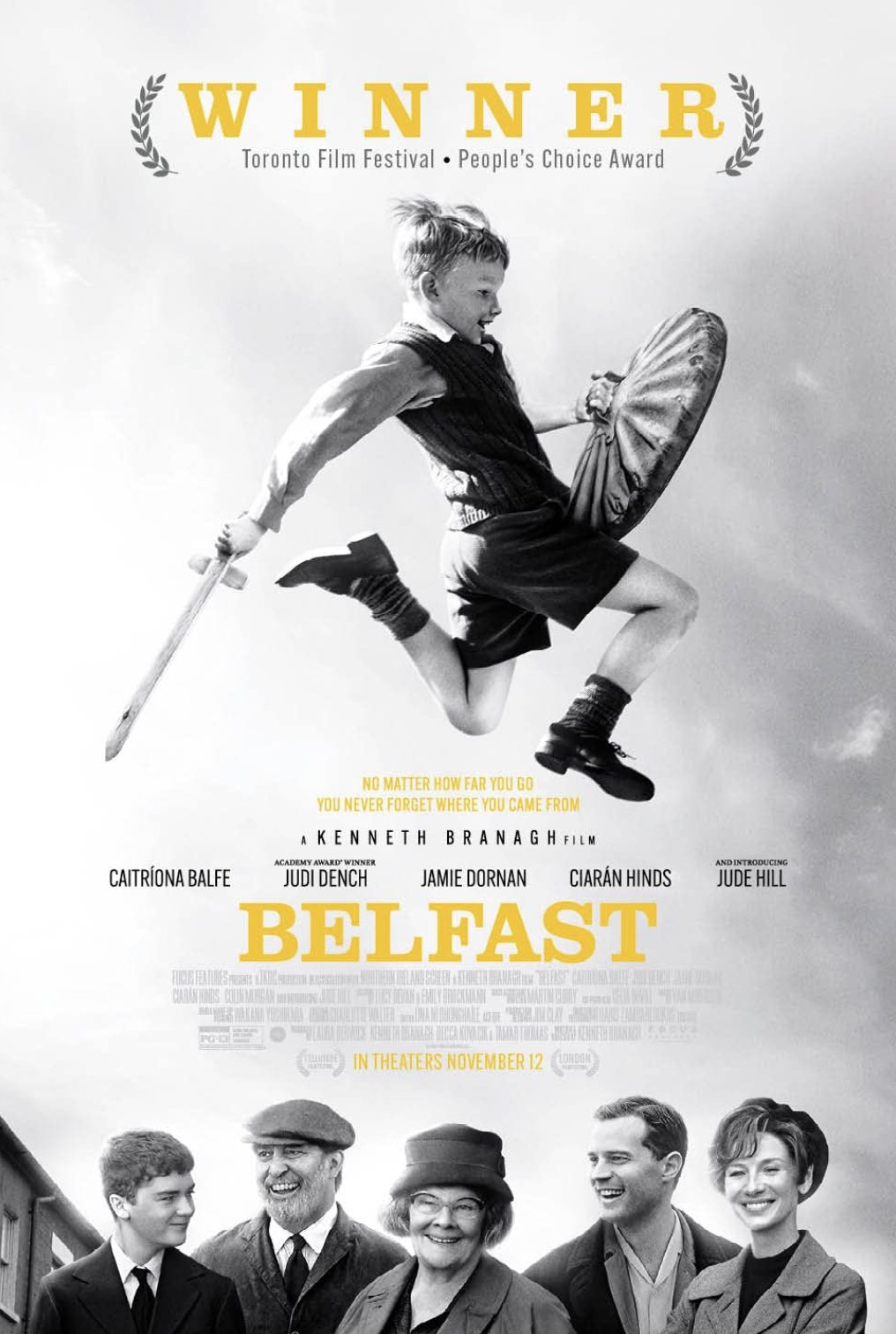 Basically: A young boy tries to figure out the world while the only life he’s known is thrown into turmoil.

Sometimes you watch a movie you don’t think is about anything you can relate to but its story ends up connecting to so much more. Belfast’s setting of 1960s Northern Ireland during the conflict between protestants and catholics feels very connected to the times we are living in now. Sadly it’s connected in a way that life repeats—it’s not always the same but it echoes.

By acclaimed filmmaker and actor Kenneth Branagh, the film is about a family in Belfast, Ireland at the end of the 60s. It follows Buddy (Jude Hill), the youngest child who’s trying to understand the changes in his community while his father reckons with having to move his family out of the only place they’ve ever known and lived. The comedy and the conflict are beyond relatable. Belfast portrays such a human experience that most of us have been close to in some way. The dilemma Pa (Jamie Dornan) faces—being a father who isn’t always around because of his construction job—is captivating. Caitríona Balfe, who plays Ma, does great too. Ma is just as important or more so than Pa’s character as she’s the one looking after the family all the time. She makes sure the family has a home. Rounding out the cast is Dame Judy Dench as Granny and Ciarán Hinds as Pop, Buddy’s grandparents.

Buddy’s perspective is perfectly shot. Nothing is clearly explained since in most ways Buddy has no idea what’s happening. The film is also shot in beautiful looking black and white with excellent photography. The values on screen really pop and it also uses moments of color to shape how certain things breakthrough in memories of the past. Movies the family goes to see to forget the current situation are in color and other little objects might pop. Belfast also balances the tone very well, like Buddy’s interactions with the girl at school he likes or how his family gives him life lessons (good and bad). It grabs you and gets you caring about young Buddy. That contrasts with the big bad Billy Clanton (Colin Morgan), the lead protestant on their block who threatens Pa to choose a side or face the consequences. He brings such a great presence and tension on screen, something I really related to. It reminded me of growing up in the 80s and 90s during the crack era. When the world shifts around and you don’t know why. There are other places and times that the audience will relate to. These moments are why the film really connects during these times of crazy division for very complicated but also ambiguous reasons that could lead to extreme violence. This conflict hits home, the uncertainty hits home.

Belfast is freaking good y’all, it’s one of the best of the year.

In the End: Belfast is a very well-conceived story of a family who has to make a life-changing decision and lose everything they’ve ever known. Branagh knocks it out of the park.