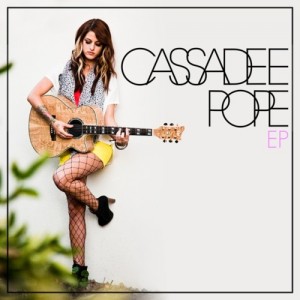 After performing most of her original songs live on her solo acoustic tour earlier this year, Cassadee Pope left thousands of fans eagerly anticipating her debut solo release — and the wait was worth it. The self-titled EP, produced by Andrew Dixon and Jason Gavi, is sure to be a hit among her supporters both old and new. Pope shows off her killer vocal range, and the record as a whole reflects her bubbly personality with more of a mainstream pop twist than her previous work with Hey Monday.

The record opens with first single “Original Love” (streaming exclusively on idobi here) and starts things off with a bang. The song is obviously geared toward being a radio hit, but its infectious energy paired with adorable lyrics (“You leaned in to kiss me and gave me a black eye / But since then my vision’s been so clear”) make it instantly addicting. This track is bound to impress as it maintains the classic liveliness that Hey Monday fans know and love Cassadee for while adding an effervescent pop flair into the mix.

“Secondhand” and “I Guess We’re Cool” keep the energy level high but don’t quite compare to the EP’s opener. The live acoustic versions of these tracks enabled Cassadee’s voice to stand out, where the recorded instrumentals distract more than support in comparison, making these two tracks ultimately fall a little short of their potential.

The EP closes with a personal favorite, “Told You So.” A striking compilation of piano and vocals, the song delivers an inspiring message of perseverance and overcoming obstacles in order to achieve your dreams — only appropriate considering the risk she took in stepping back from Hey Monday to record a solo EP.   While many singers have succeeded transitioning from a full band to a solo career, the list is much longer of those who haven’t made it.   Slower composition and deeper lyrical content set “Told You So” apart, but it still captures the energy that resonates throughout the entire record.

Cassadee Pope obviously took a different approach in writing this record compared to her previous work with Hey Monday, but she certainly does not disappoint. Her energetic, optimistic personality shines through these songs, making the EP a must-have for old Hey Monday supporters as well as any fan of pop music. Despite a few moments where it doesn’t quite live up to its potential, this EP as a whole demonstrates Cassadee’s versatility as a musician and sets a solid foundation for her future success. Whether she reunites with her bandmates or continues to pursue her solo career, fans can expect big things from her.