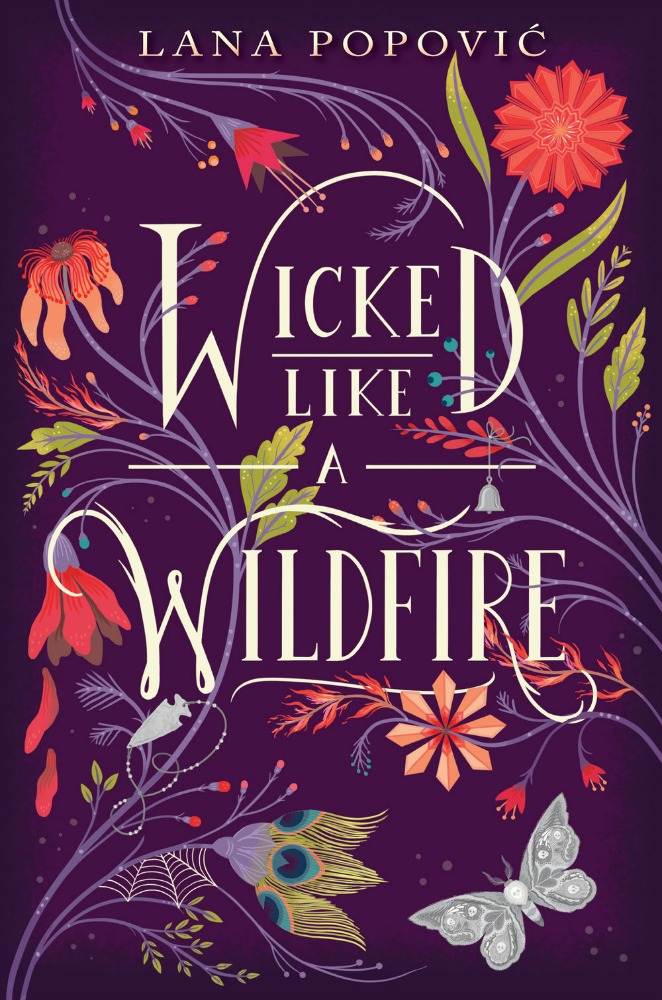 “Be strong, yet soft…[b]e fierce, yet so fastidious. Remember what all this power is for—to serve, and play, and always please.”

Basically: Iris and Malina have always been taught to hide their powers and never fall in love but their lives change when their mother is attacked in Lana Popovic’s Wicked Like a Wildfire.

They don’t use the term “witch”, but twins Iris and Malina have always had the “gleam”, the ability to make things beautiful. Malina does it through song while Iris produces “fractals” of color. But their mother, Jasmina, always warned them to keep the gleam secret, even forcing Iris to tamp her powers down, and made the girls promise to never fall in love. A few days after a beautiful but mysterious woman visits their family cafe, Jasmina is brutally assaulted and left in a state somewhere between life and death. As they look for their mother’s attacker, the girls unravel their family’s dark history and learn more about the gleam.

Wicked Like a Wildfire, the first in Lana Popovic’s Hibiscus Daughter duology, is a modern fairy tale. Set in contemporary Montenegro, it weaves together myths, magic, and the trials of being a millennial teen. On one page, we hear the legend of how Jasmina picked names for her newborn twins; five pages and seventeen years later, she and Iris clash over Iris’ skimpy clothing. It’s an odd juxtaposition of mythic and modern and, for the most part, it works, but mentions of McDonald’s or roller-coasters feel incongruous in such a fantastical setting.

It’s actually quite hard to talk about the plot without spoiling all the twists—it seems more like a character driven fantasy, focusing on Iris and Malina’s development rather than a traditional quest. There’s also a curse and an ancient being and a cliffhanger ending to whet your appetite for the second book, Fierce Like a Firestorm, which is expected to release next year. While I loved the themes of sisterhood that pervade the text—obviously between Iris and Malina, but also the way the other women in their family are linked—I found it hard to relate to any of the characters. Iris is noble but hard-headed; Jasmina’s mothering skills tend to come across as cruel; and Malina is the sweet one caught in the middle. Supporting characters, like the twins’ friends Luka and Nicoleta, are given a fair amount of page time, but they’re often at risk of being overshadowed by flowery prose.

Because, unfortunately, the book’s strongest feature is also its greatest weakness. The colors associated with Iris’ gleam, the perfumes Malina experiments with, the confectioneries in their mother’s cafe—all of them are given detailed descriptions that take up page after page. Don’t get me wrong: the prose is lush and lyrical and paints a vivid picture, but the plot is lost amongst all the pretty words, and the majority of the story plods along slowly as a result. The attack on Jasmina, the crucial turning point, doesn’t happen until nearly 20% into the book, and for some people, it could be a struggle to get that far. Some readers might enjoy the languid pace, but it makes the novel feel more dense than it is.

Popovic is a talented writer and has some fine ideas; her take on sisterhood and sisterly love is sure to please anyone who loved Frozen but Wicked Like a Wildfire burns too slowly to be truly entertaining.

In the end: Get the Cliffnotes. If description-heavy texts bring you delight, you’ll love the mental movies Popovic produces, otherwise you’ll just be frustrated by the slow pace.