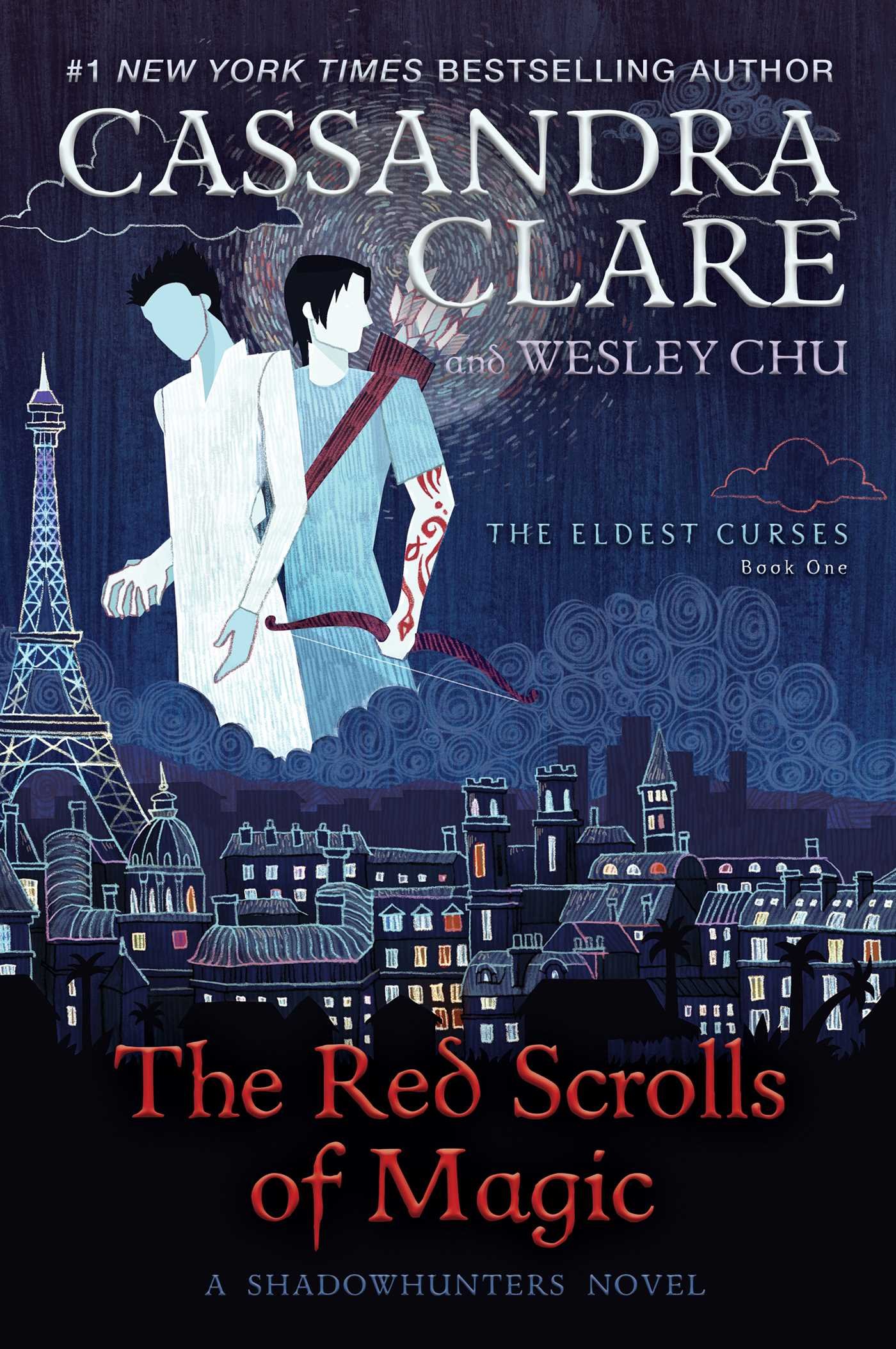 The Red Scrolls of Magic

“It’s a classic love story. I hit on him at a party, he asked me out, we fought an epic magical battle between good and evil side-by-side, and now we need a vacation.”

Basically: Magnus Bane and his Shadowhunter boyfriend Alec Lightwood just want to relax on their European vacation but there’s a mysterious cult that’s seriously cramping their style in Cassandra Clare and Wesley Chu’s The Red Scrolls of Magic.

Magnus Bane is the High Warlock of Brooklyn. He’s also Alec Lightwood’s new boyfriend and he’s on a mission to show Alec all the best parts of Europe on their first couple’s vacation. But Magnus’ old friend Tessa Gray pops into their Paris flat to deliver bad news: There’s a mysterious cult on the rise called The Crimson Hand and they’re claiming that Magnus is their leader. Magnus remembers joking about forming a cult centuries ago but the rest of his memories from that time are missing so there’s no way to prove he’s innocent. Together, Magnus and Alec race across Europe’s most glamorous cities to figure out who is actually leading the cult before Magnus’ reputation is completely destroyed.

Set around the same time as City of Fallen Angels and from the universe of Cassandra Clare’s The Mortal Instruments, this is the first book in a new series focused on Magnus and Alec (commonly referred to as Malec). But despite it being a separate series, you need to be familiar with the previous installments because characters from across the Shadowhunters world make an appearance—Tessa, Jace (and Clary), Isabelle, Raphael, even Aline and Helen. If those names aren’t ringing bells for you, then this is not the series for you.

Apart from the fan service (Aline and Helen are a couple in later books and this installment shows us their first meeting), some swoony Malec scenes and a handful of funny quips (Raphael the vampire has some snappy lines), the story doesn’t have great legs. The mystery surrounding The Crimson Hand is pretty predictable and a lot of the plot revolves around the assumption that you know what else is happening in the Shadowhunters universe at the same time. Because it takes place in between already published books, there’s no real sense of urgency—we know that Magnus and Alec survive this adventure because [spoiler alert?] they show up alive and well in at least three other books. While it is co-written, the book features the hallmarks of Cassandra Clare’s writing: multiple POVs, and an ostentatious, overly descriptive style where characters spend far too much time telling us what they’re wearing. Basically, despite Wesley Chu’s name on the cover, it reads exactly like a Cassandra Clare novel—which is either a good thing or a bad thing depending on how you feel about her.

On the positive side, there is a lot of representation. Alec is gay, Magnus is bisexual (or maybe pansexual, it’s never clearly defined on-page), Aline and Helen are a lesbian couple. Raphael is latinx, new character Shinyun Jung is of Asian descent—the list goes on. There’s an excellent amount of diversity which is definitely needed in the YA world, but, considering her problematic reputation, I’m not sure that Cassandra Clare is the best person to represent these marginalized voices.

As someone who read the original The Mortal Instruments series as it was being released (2007-2014…I remember when it was originally supposed to be a trilogy), I don’t recall Malec’s relationshing having so much on-page time. Yes, we got some sweet moments with them but they were rarely—if ever—the POV characters. Then, once the TV show launched the Malec ship into orbit, it seemed like Clare finally realized that maybe theirs was a relationship people wanted to know more about. Here’s the thing: If we’re going to persecute J.K. Rowling (and, I’ll admit, rightfully so) for dropping hints about Dumbledore and Grindlewald’s steamy relationship post-publication in an attempt to keep them relevant, shouldn’t we also be wondering why Clare decided that now was the time to tell us more about Malec’s first few months together? Again, this book takes place in between her other novels, so why tell this particular story (and in such an expansive—and expensive—format) when she could have, oh, I don’t know, built a series around their lives post-The Mortal Instruments? At least that would have given us higher stakes to invest in—will they really be together forever? What happens when the battles have been won and they finally start to settle down?—and it wouldn’t feel like she was just jumping on the bandwagon generated by fans of the TV show. A show, by the way, that Clare personally has “mixed feelings” about.

In her author’s note at the back of The Red Scrolls of Magic, Clare mentions wanting to give voice to marginalized groups and wanting to portray LGBTQ+ relationships on page for people to see themselves, which is a noble sentiment. But in an era of #ownvoices, I’d have preferred to see a queer writer behind this story. Wesley Chu does add a certain legitimacy and hopefully this project will inspire Clare’s readership to support him and his writing career. There is definitely an audience for this book—those who want salacious details about Malec’s first time, for example—but for the discerning reader The Red Scrolls of Magic doesn’t offer anything groundbreaking. You’re probably better off reading some fan fiction so that you can get your Malec fix without the $20 price tag.

In the end: Wait For The Movie. Fans of the cancelled Shadowhunters TV show will love getting a little extra Malec action, but the story isn’t strong enough to keep the occasional fan entertained.