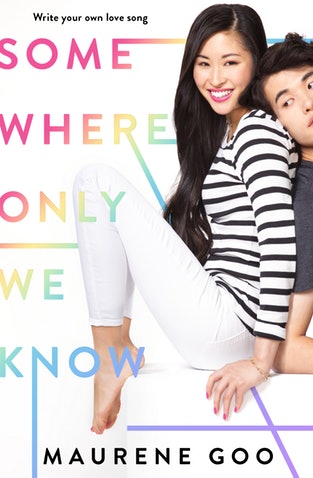 Somewhere Only We Know

“Human beings are messed up. But we are not beyond fixing!”

Basically: The biggest name in K-Pop just wants a night of freedom but when she bumps into an enthusiastic young photographer, she gets more than she bargained for in Maurene Goo’s Somewhere Only We Know.

Everyone knows who Lucky is. She’s currently the biggest name in K-Pop and her on-stage performances are legendary. But on the last night of her massive tour across Asia, days before she’s set to break into the North American market, Lucky finds herself in a Hong Kong hotel desperately craving a hamburger. After miraculously avoiding her security and handlers, Lucky makes her way into the city—but not before she bumps into Jack. Unbeknownst to Lucky, Jack is a young paparazzo who quickly realizes he can make a lot of money selling photos of Lucky to the tabloids, as long as he plays his cards right. Under the impression that he doesn’t know who she is, Lucky agrees to spend the day with Jack. But what will happen once they’re forced to return to their real lives?

Here at idobi, we love Maurene Goo. Her previous novels—I Believe in a Thing Called Love and The Way You Make Me Feel—completely charmed us. She’s the queen of writing fun Asian-American led YA novels, the types of stories that give us a taste of what it means to be Korean-American while keeping things (mostly) light. Not to mention we adore the way her books are named after songs. So when we found out she was writing a book about a K-Pop star, we needed to read it like yesterday.

For the most part, Somewhere Only We Know, is exactly what we wanted. Through Lucky’s eyes, we get a sense of how intense the world of K-Pop really is—from the extreme diets to the packed schedules to the pressure of remaining at the top when there are literally hundreds of other performers who could replace you. Having moved to Korea from the US, Lucky has an outsider’s perspective of the industry and it’s only when she realizes that she’s just going through the motions that she wonders why she no longer loves her job.

Jack is also a Korean-American now living in Hong Kong. He’s on his gap year and interning at his dad’s bank—but all Jack really wants to do is go into photography. He dreams of becoming a professional but knows that his parents, who worked so hard to support their family, would never accept photography as a real job. Once again, Maurene Goo gets into a teen’s head and delivers a near-perfect experience—that feeling of not quite knowing what you want to do with your life and trying to decide between following your dreams vs. being more practical about the future. Both Jack and Lucky struggle with finding ways to keep themselves happy amongst all their other responsibilities and if that doesn’t accurately explain what it’s like to be in between high school and college, I don’t know what does.

The only issue I had was that it was written from both Lucky and Jack’s perspectives. While I normally enjoy that type of thing, knowing that Jack was stringing Lucky along (he clues into her real identity a few hours after meeting her but she remains oblivious for three quarters of the book) made it frustrating. It would have packed a bigger punch if we, like Lucky, thought she was really getting away with this charade. Getting Jack’s perspective allows us to watch as he changes his mind but it made some scenes a little exasperating. Still, we get to see their relationship grow and you’ll definitely be rooting for them to end up together.

In the end: Read it! It’s a sweet, diverse little rom-com with a splash of K-Pop—what’s not to love?