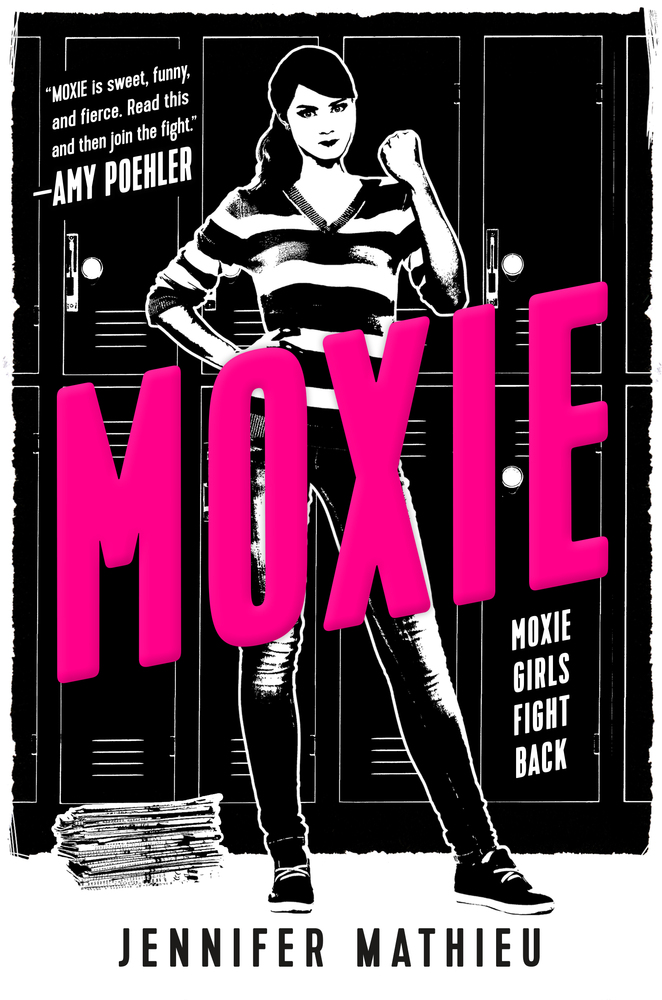 “This is what it means to be a feminist. Not a humanist or an equalist or whatever. But a feminist. It’s not a bad word…really all it is is girls supporting each other and wanting to be treated like human beings in a world that’s always finding ways to tell them they’re not.”

The boys of East Rockport High think they’re funny when they chase after girls hissing “make me a sandwich” or trying to cop a feel in the hallway. Vivian is usually so mild-mannered but when the school administration doesn’t do anything about the gross sexist acts and continue to praise the boys’ football team while ignoring the girls’ soccer, she gets mad. Inspired by her mom’s stories of the Riot Grrrls in the nineties, Vivian creates her own zine, Moxie, to call girls into action. Other girls start to use the “Moxie” name in their own attempts to undermine the gender inequality, but when one of the football players is publicly accused of attempted rape, the movement takes a serious turn.

Jennifer Mathieu’s YA novel reads like a crash course in feminism—in the best way. Raised by a former Riot Grrrl follower, Vivian has always considered herself a feminist but her friends are varied in their understanding of the concept; some balk at standing up for themselves, even when they know the boys are wrong, others, like her new friend Lucy, constantly challenge the school’s antiquated idea of gender norms. Using bands like Bikini Kill and citing contemporary figures like Roxane Gay, Vivian and her friends educate themselves on what it means to be a feminist in this day and age as they fight for equality and consequences for the boys’ actions. It’s also heartening to read a book where female characters band together instead of compete—there’s some tension, especially between new girl Lucy and Vivian’s best friend Claudia, but the conflict is resolved realistically as the characters become more open-minded.

Of course, because it’s a YA novel, there’s a little bit of a love story between all the revolutions, though to be honest, Seth—Vivian’s crush—was my least favorite part of the book. Their relationship feels rushed but it’s important that Mathieu shows that feminists aren’t men-haters or whatever the latest rumour is. In fact, having Seth around opens up the opportunity to start a subtle “Not All Men” dialogue—when Seth tries to convince her that there are some “good guys” at their school, Vivian patiently explains that he doesn’t understand what women go through. While she and the other girls appreciate having support from a small group of guys, the focus is on girl power—but that shouldn’t stop males from reading this book.

Despite talking about “mature” themes like feminism and rape culture, Vivian’s inner dialogue sometimes comes across as a little young. While that might frustrated older readers, it makes the subject matter more accessible for a younger crowd (14 and up) who will feel like Vivian is a friend.

In the end: Read it! Whether you consider yourself a feminist or not, Moxie shed light onto issues that a lot of women face. Plus, Amy Poehler told us to…and who are we to defy Amy Poehler?