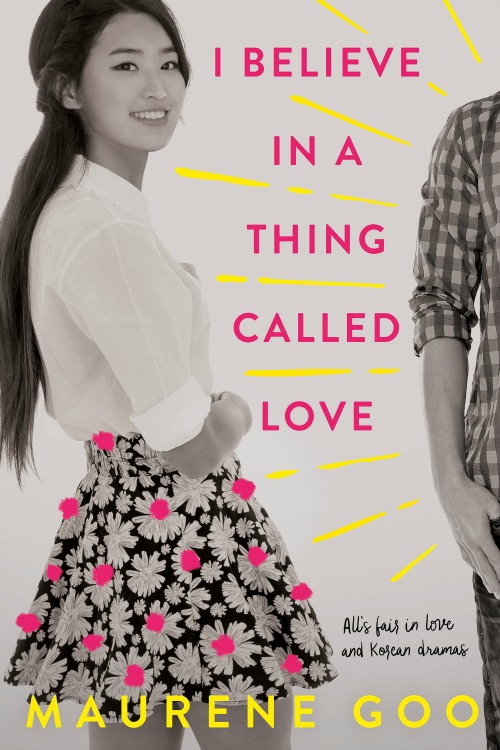 I Believe in a Thing Called Love

“I believed, and still believe, that you can build your dreams brick by brick. That you can accomplish anything with persistence.”

Basically: Desi Lee is good at everything except talking to boys, but when she meets the cute and artsy Luca Drakos, she makes a plan to follow the K-Drama Steps to True Love in Maurene Goo’s I Believe in a Thing Called Love.

Desi Lee has always been a perfectionist. But when it comes to boys, her friends constantly laugh at her epic amount of “flailures” aka flirting + failure. Then she meet-cutes new student Luca Drakos who seems to have a thing for her, and Desi is determined not to suffer a flailure this time. She turns to k-dramas and creates a list of steps she needs to follow to win Luca’s heart, from the subtle and innocent—joining Art Club even though she can barely draw a tree—to the dramatic and possibly stupid i.e. faking a car crash.

I know the relationship between Desi and Luca is the important part of the book, but let’s forget about them for a minute and focus on Desi and her dad. They are the absolute cutest, depending on each other after Desi’s mom—the love of her father’s life—died when Desi was a kid. Unlike a lot of YA novels in which absent parents are the norm, Desi’s Appa (Korean for dad) has a huge, protective presence in her life. He’s the one who introduces her to k-dramas in the first place, while she teases him for being addicted to them. He supports her no matter what, even when he worries that she’s throwing her life away for Luca (she makes a reckless decision about her future that a lot of readers may have a hard time accepting).

Desi herself is an interesting character too: she’s smart—studying to get into Stanford’s medical program, and sporty—she plays soccer, proving that nerds can be athletic too. Sometimes her actions are a little extreme, but she justifies them by relating them back to the k-dramas that inspired her and you start to see her (twisted) logic. I’m not saying she’s perfect—though Desi herself might argue with me—but she’s real. She can be awkward in her eagerness to be great at everything, but her persistence is an admirable trait. Luca is a sweet love interest—he encourages Desi to be more open-minded, especially about art—and I appreciate that their relationship builds over time: Desi is instantly smitten with him, but it takes a while for their friendship to develop into something more.

If you’re a k-drama novice like me, you’ll find yourself desperate to explore this cultural phenomenon (lucky for us, the ladies of Geek Girl Riot chatted to author Maurene Goo about their favorite series to use as a springboard). If you’re a fan of k-dramas, you’ll love the spark of recognition every time Desi mentions a series that played a role in her steps. And Desi and Appa’s Korean heritage is woven through the book as well, from his accented English to her delicious sounding ramen recipe. I said it before with When Dimple Met Rishi—it’s about time we had more mainstream “own voices” stories, especially ones that are this sweet and easy to swallow.

In the end: Read it! Like a good k-drama series, once you start it, you won’t be able to stop until you find out how it ends.