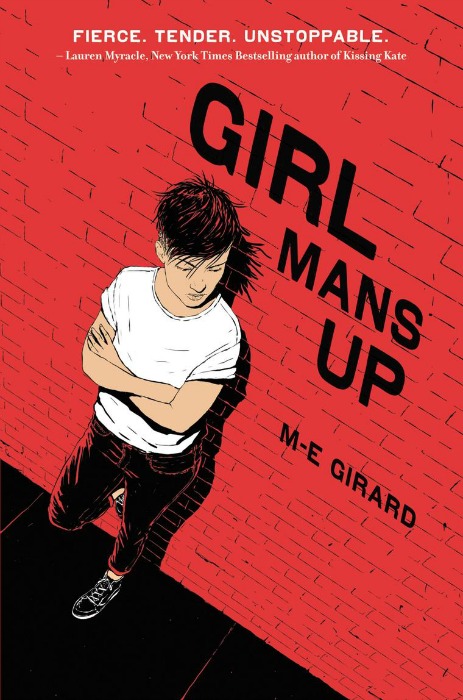 I don’t feel wrong inside myself. I don’t feel like I’m someone I shouldn’t be. Only other people make me feel like there’s something wrong with me.

Basically: Pen is a girl who dresses like a boy and people can’t seem to decide whether she should be more feminine or just man up in M-E Girard’s Girl Mans Up.

Pen doesn’t feel like a boy, but she doesn’t dress like a girl. Some people, including her brother Johnny and the hot girl at school, Blake, don’t care, but other people do—especially Pen’s Portuguese parents who have very rigid ideas about what constitutes a “boy” or a “girl”. Meanwhile, Pen’s best friend Colby may have gotten his summer fling Olivia pregnant, but he’s refusing to step up to his responsibilities and Pen somehow finds herself becoming Olivia’s confidante. Everyone seems to think they know how Pen should act—either by being more of a girl or just “manning up”—but she just wants to kiss girls and play video games (preferably at the same time). Is that really so wrong?

One of the things we like best about Girl Mans Up is how realistic it is. Pen isn’t perfect; she makes mistakes and says stupid things, but over the course of the novel, she learns how to accept herself. We’re also super into the sweet relationship between her and Blake, plus who doesn’t love a supportive sibling relationship like the one Pen has with Johnny? The story doesn’t have a complicated plot, but the character development is the most important part: we spend a lot of time in Pen’s head and eventually figure out what makes her tick. You’ll be able to see parts of yourself in Pen’s characterization—whether it’s the way she rebels against her traditional parents or the way she agonizes over her continued loyalty to Colby before she can finally acknowledge how toxic he is, both to her and to Olivia.

There aren’t that many YA novels the deal with gender-fluid characters like Pen and that’s just one of the reasons why this book stands out. More than that, it touches on a lot of hot button topics: there are diverse characters (including Pen’s parents who often resort to Portuguese when they get flustered), and a subplot that deals with teen pregnancy and abortion in an honest way. The book can also be brutal as it depicts some of the bullying Pen has to deal with everyday, from girls who think she’s transgender to guys who callously tease her for wanting to be “one of them”. All these elements are integrated into the story without feeling like Girard is pandering to the YA demographic: they come across as genuine and just a part of Pen’s life, as much as her fondness for wearing her brother’s clothes or her obsession with an old Atari gaming system.

In the end: Read it! Girls Mans Up is a realistic honest book about one girl’s desire to be accepted in all her black t-shirt wearing, video game playing, girl kissing ways.