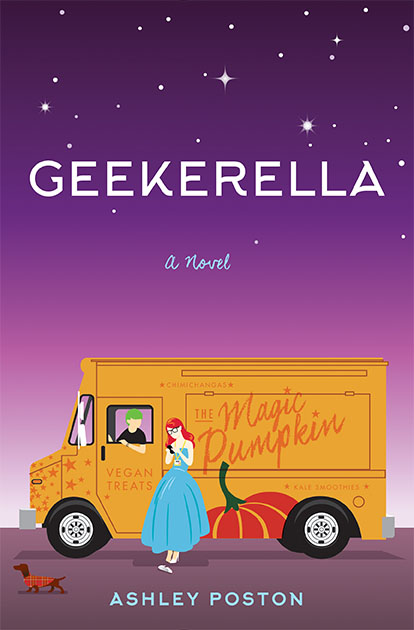 “I’m the villain of my story, and the hero…I am a fact of the universe. The Possible and the Impossible.

Basically: Fandoms and fairy tales collide in Ashley Poston’s Geekerella, the story of a girl, a boy, and the reboot of their favorite TV show.

Elle is a huge fan of the old sci-fi TV series Starfield. So when heartthrob teen actor Darien Freeman is cast as the main character in the reboot, she’s worried he won’t do it justice. But Darien has been prepping for this role his whole life and will do anything to make it work, knowing how much it means to the die-hard fans. After a wrong number text sparks a conversation, Elle and Darien begin to form a friendship without knowing who is on the other end of the line. And when they both make plans to attend the official Starfield convention, it’s only a matter of time before they meet face-to-cosplaying-face.

Geekerella is the type of book you pick up, intending to read only one chapter, and before you know it, you’ve finished the whole thing. Its structure is similar to Cinderella—girl has an unhappy family life, wants to be free, meets a boy, falls in love, loses a shoe, etc.—but it’s updated enough to make it feel fresh. For example, Elle and Darien’s relationship is developed through texts—and thankfully, Poston avoids using awkward text speech (u no, lyke dis). She keeps the spirit of the original fairy tale alive with a handful of subtle allusions: Elle works in a vegan food truck called the Magic Pumpkin; Darien, cosplaying as Starfield’s Federation Prince Carmindor, presides over a masquerade ball; and Elle’s terrible step-sister tries to ruin her cosplay costume. It’s all very cute and clever, and Poston makes the story feel effortless with her sweet-as-your-favorite-candy prose, smoothly switching between Elle and Darien’s perspectives in alternating chapters without a hitch.

There are also lots of references to real life geeky goodness, from Doctor Who to Star Wars to The Lord of the Rings, and even a quote from The Princess Bride (“Have fun storming the castle!”). The whole book feels like one giant love letter to the fandoms and pop culture that shaped us. Elle is every nerdy fangirl (or boy): she spends hours re-watching Starfield, and writing about Starfield, and dreaming about attending official Starfield events. Substitute “Starfield” with the book/movie/tv show of your choice, and we can all relate to Elle’s level of devotion. More than that, Poston shows us that it’s okay to obsess over something fictional, whether it’s spending your whole paycheck on the perfect accessory for your next cosplay, or writing fan-fiction because you like spending time in someone else’s world.

“We may ship different things or be in different fandoms…[but] when we become those characters, pieces of ourselves light up like glow sticks in the night. They shine. We shine. Together.”

As if it wasn’t enough that she understands our fangirl-y hearts, Poston also gets a bunch of bonus points for having a POC love interest—Darien is described as having brown skin and dark curly hair—not to mention an adorable subplot featuring a LGBTQ couple. Adding diversity makes Geekerella feel even more realistic: fandoms (good ones, at least), don’t distinguish race or sexuality or gender—everyone is loved and welcome. And we’re so glad books like Geekerella exist to remind us that we’re not alone.

In the end: Read it! It’s a charming, feel-good modern day fairy tale that reminds us why we love being a part of fandoms in the first place.