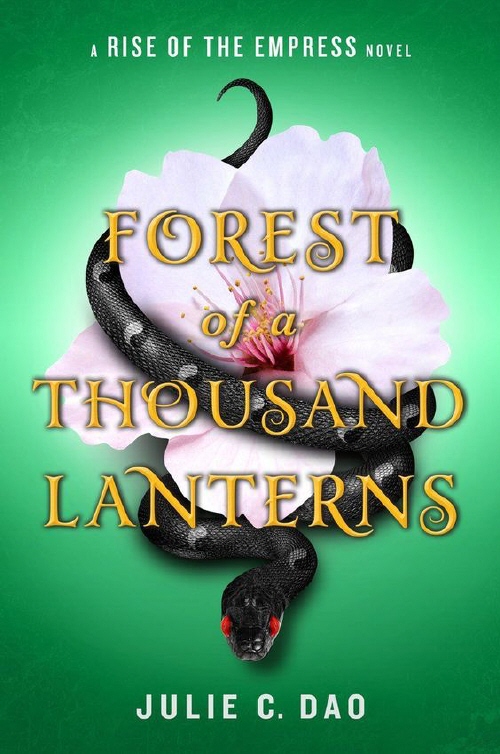 Forest of a Thousand Lanterns

“She knew her own worth. She would seize her destiny with all the strength and spirit within her, and bend them all to her will: every man kneeling and every woman overshadowed.”

Basically: Xifeng is determined to rise up from her lowly beginnings and become Empress through any means possible in Julie C. Dao’s Evil Queen-inspired debut, Forest of a Thousand Lanterns.

Xifeng has always been beautiful but is forced to live the lowly life of a seamstress in a tiny village. Her aunt, Guma, though often cruel, reassures Xifeng that she is destined for greatness. When her lover, Wei, cajoles her into running away Xifeng finds herself taken into Feng Lu’s Imperial Palace, befriending the Empress, and even catching the eye of the Emperor himself. But Xifeng is not content to be a servant or even a concubine—she ruthlessly sets her sights on becoming Empress. Fuelled by a dark magic that runs through her veins, Xifeng is not above eating the hearts of innocent animals—and people that get in her way—on her quest to the throne.

It’s so rare that we get books from the villain’s point of view, but Julie C. Dao doesn’t hold back with this Evil Queen storyline. At first, it’s hard to like Xifeng—she’s selfish and ungrateful but eventually you can’t help being impressed by her ambition and ruthlessness. It’s also delightful that, while there is a romantic subplot, Xifeng isn’t doing things for love. In fact, more often than not, she uses handsome young men (her childhood love, the Crown Prince, the Emperor himself) as stepping stones to achieve her dreams and I’m surprisingly okay with that. The men see her as weak because she’s a woman but Xifeng is no damsel in distress—when her tarot cards are read and she learns that there is a Fool who will try to stop her from becoming Empress, Xifeng is ready to (literally) kill whoever gets in her way.

Xifeng is not the only character who is fully developed over the course of the novel. The side characters are given their own plotlines as well and they all feel like flesh-and-blood creations, not flat accessories to Xifeng’s story. Dao even offers a look at the different ways abuse can affect people—whether it’s Xifeng’s continued affection for her aunt despite her childhood abuse or the way the Emperor is constantly threatened by one of his concubines.

Dao’s world-building is also well done, especially considering that this is her debut. It can be hard to tell what’s real and what’s a myth, but there’s magic in Xifeng’s world and it takes many forms—dragons and gods and prophecies. Though the story starts off slow, the writing is beautiful and Xifeng’s journey is compelling enough to have you rapidly turning the pages, even if it is a little gory at times.

In the end: Read it! Xifeng isn’t a traditional heroine, but you gotta respect a girl who goes after what she wants, and the end is perfectly set up for a sequel.