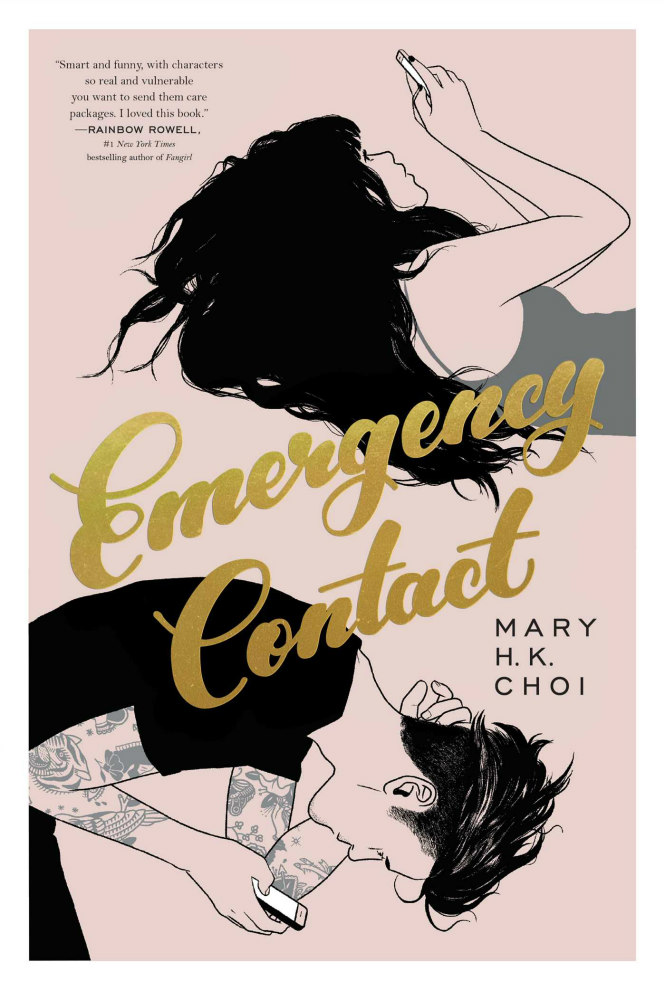 “You don’t choose [art]. It chooses you. If you waste that chance, your talent dies. That’s when you start dying along with it.”

Penny Lee never really liked high school. Now that it’s her freshman year of college, she’s ready for a new start (especially now that she’s an hour away from her overbearing mother). Sam Becker, meanwhile, is living above the coffee shop where he works, trying to get over his ex and wondering how he’ll ever be a documentarian if he can’t afford film school. When the two of them are introduced, through Penny’s roommate Jude, they barely spare each other a second thought—until Penny happens to come across Sam having a massive panic attack on a public street. They swap phone numbers, joking about becoming each other’s “emergency contact”, and before they know it they’re spending hours on the phone workshopping each other’s life. Even though their friendship develops over text and without any real face-time, it’s pretty much perfect—until the day they finally find themselves standing in front of each other.

Emergency Contact is super cute but still manages to have depth. The majority of Penny and Sam’s friendship is built through texts and their conversations range from the silly (which is better: Pie or cake?) to the serious (their issues with their mothers, Sam’s complicated relationship with his ex, the secret Penny has never told anyone else). It’s sweet to see the way they slowly begin to trust and depend on each other. Their friendship is the opposite of the insta-love trope that is so often found in young adult novels. Instead it’s a satisfying slow burn—you might find yourself grinning every time they reach a new level in their relationship but at the same time you’re impatient for them to get together—and the moment when they finally see each other in person again is pretty swoon-worthy.

I’m all for diversity in books and this one smacks you in the face with diverse characters before you even open it. Just look at the cover: I love that Sam has tattoos all over his arms and that Penny is so clearly Asian (specifically, she’s Korean). This is a true celebration of Penny’s ethnicity because it doesn’t make it an issue. There’s no big journey of self-discovery or overcoming barriers because of her background, she’s an American girl living her life and she is also Korean. Stories that talk about diverse backgrounds and cultures are incredibly important, but it’s refreshing to have a book whose protagonist is a person of color without it being the only defining factor or a central plot point.

I also like that they’re a little older than characters usually are in YA novels—Penny is eighteen while Sam is twenty-one. Some of the subject matter puts it on the older end of the YA spectrum, but a lot of teen readers will relate to Penny’s struggle with starting college. In particular, the scene where her creative writing professor gives her constructive criticism will resonate with anyone who knows the pain of getting a lower grade than expected on a college-level project, compared with their high school experience. And while there is a mention of rape/assault it’s dealt with in a sensitive way—it’s not included just for shock value, it gives context to a certain character’s behavior.

Both Penny and Sam are “broken” in some way but by being each other’s support system they’re able to start healing.They’re not magically “fixed” by the end of the book but they’re on the way to feeling more stable. M.K. Choi does a great job of making them feel realistic while still showing the way their budding relationship changes them. The only thing that stops Emergency Contact from being completely perfect is the ending feels a little rushed—even that is forgivable because you can’t help feeling proud of how far these characters have come.

In the end: Read it! Diverse characters, realistic problems, and swoony banter—really, what else could you want from a smart, well written YA novel?